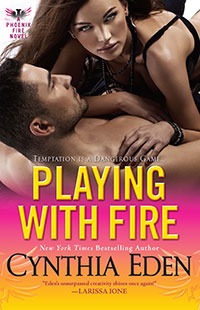 Cassandra (Cassie) Armstrong has had a difficult life. As daughter of the founder of Genesis, Cassie witnessed firsthand the atrocities committed by her late father and brother in the name of protecting humankind and furthering human evolution. Now Cassie is on a personal mission to save those who were most damaged by her father and brother. However, in order to do this, she must win the trust of the ancient phoenix, Dante, a man with a beast inside who forgets he knows Cassie every time he dies and is reborn. She must also dodge Lieutenant Colonel Jon Abrams, who has picked up the paranormal experimentations right where her father left off.

Playing with Fire is the third title in Ms. Eden’s Phoenix Fire series which follows the lives of three different phoenix shifters. While each book is a stand alone romance, the three titles do follow a loose story arc and the lives of characters which span the entire series. However, the author does a good job of bringing readers up to speed and explaining who the different characters are via brief backstories.

From the moment the book opens, the story is non-stop action and adrenaline. I found the pace and exciting twists kept me engrossed and eager to find out what would happen next. I also liked that once the characters found some much deserved down time, the romance heats up and the mutual attraction between Cassie and Dante is explored… thoroughly.

Cassie is a powerful woman, and I appreciate her strong desire to atone for her father’s sins. Her heartache over Dante’s inability to remember who she is when he is reborn, as well as his apparent lack of reciprocating feelings, is justified and doesn’t detract from her strength. As one of her father’s experimentations herself, Cassie’s positive outlook on life is refreshing and strengthens her resolve. I was a little disappointed that she seemed to be another female character who didn’t want to kill any of the bad guys (something I had an issue with in an earlier book); however, Ms. Eden gives balance to Cassie, creating some dark and light.

Whereas Cassie is balanced, Dante is not. He is one hundred percent dark, all the time. Even in his feelings towards Cassie, he keeps his emotions in check and treats her more like a possession than a lover. I felt up until the very end of the book that although they have great sexual chemistry, Dante was not the right man for Cassie. Where I love a good “bad boy,” unfortunately, Dante’s actions and motives are selfish and frankly, not those becoming for a man supposedly in love. I was continually frustrated with Dante and felt that he never really redeemed himself or made himself worthy of mating Cassie.

The action ramps up again towards the conclusion of the story, and although at times it was a bit over-the-top, I enjoyed the outcome. I also found the surprise twist near the climax a good one, which I probably should have seen coming. I was also a bit frustrated with the outcome for one of the supporting characters who has been around since the first book. I’m hoping if there are more books in the series that he will get his justice soon.

Overall, I enjoyed Playing with Fire and love the mythology behind the series. I was entertained and engrossed for much of the story, and I found the sexual chemistry between Cassie and Dante exciting. However, the fact that the characters didn’t show much growth through the entire book and then everything happened right at the end, bothered me some. The last ten percent of the story was packed with overwhelming action and near unbelievable reveals. I just wish that some of what happened had been spread out more. Yet in the end, I enjoyed the outcomes and would like to read more from the series to find out if some of the other characters get their HEAs.

Cassie Armstrong has plenty to atone for. The daughter of the most immoral researcher ever to pick up a scalpel, she’s determined to use her own brilliance in genetics to repair the damage her family has done to the paranormals. Especially Dante, the first of the phoenixes, the one they call the Immortal. He’s been haunting her dreams since she was a little girl, and she’s been trying to ease his pain for almost as long. If only he remembered any of it…

Dante doesn’t know what Cassie’s story is. He almost doesn’t care. The minute he sees her, all he can think is mine. But there’s more to the pretty little doctor than meets the eye. And Dante isn’t the only one to notice. He can’t trust her, but he can’t stay away–and if he wants to learn her secrets, he’s going to have to fight like hell to keep them both alive…

One response to “Review: Playing with Fire by Cynthia Eden”