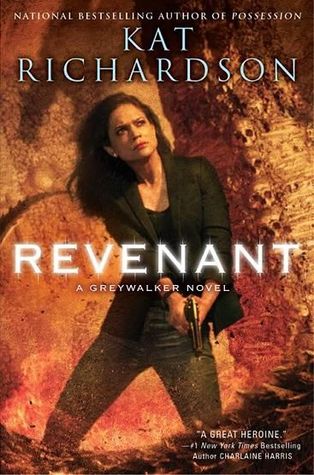 Revenant is the final (for now) book in the Greywalker series.  Gikany and Una are a little sad to see this series end.  We’ve really enjoyed this series even though we jumped into it in the middle.  However, this final book fell a bit flat for us.

Do not get us wrong, we love the world that Ms. Richardson has created.  It’s vibrant, fascinating, and draws you in.  In fact, her novels are very much like a roller-coaster.  They start slowly, building the tension gradually until you reach a pinnacle.  From that point on, it’s a nail biting, gripping, action and adventure-filled wild ride. There may be twists and turns, but nothing stops the fall and you find yourself glued to the pages until the end.  Sadly, we did not get that in Revenant.  It started off intriguingly, as Harper is secretly shipped off to Portugal, to help Quinton.  But then it started hitting speed bumps.  The action starts to build, and then when the story begins to take off, it stalls for pages of description and Harper’s musings.  This is something that wasn’t in the previous novels.

The voice and the tone of the narrative felt off.  We aren’t sure if this is just a side effect of the author not being able to visit the sites she utilized in the novel.  From the author’s note at the end, she had to rely on internet research and the descriptions of others for the descriptions in the novel.  We wonder if this is why the descriptions from Harper felt different.  Perhaps, since Ms. Richardson wasn’t able to experience them for herself, they translated oddly to the novel.  As the action started to pick up and Harper found herself in a new location, she would pause to describe the area in longer and richer detail than we recall her doing before.  These pauses in the action stalled the flow of the novel giving it a different feel.  Not that it was bad, just different from what we were used to.  One thing that we have always enjoyed is the rich descriptions, but in this novel, they seemed to be a bit heavier handed, altering the flow.

Although Revenant is the final novel in the Greywalker series, the author states in her post-note that it is only final for now.  The way that it ends, there are a few loose ends.  For a true final novel, we would be a bit annoyed that some of the loose ends are rather significant.  Without trying to give anything away, we wonder about Harper’s condition, we are unsure of what awaits her and the ramifications of what has transpired.  What does her future hold?  We have some idea of some things but others are quite vague.  We hope that at some point Ms. Richardson will return to Harper and Quinton and this rich and wonderful world.

It may seem that we did not like Revenant and that is far from the truth.  We did like it.  Quinton’s father is a true big bad, and he has pulled out all the stops in trying to achieve his dastardly plans.  Experiencing the mystery, as they try to first figure out his plans and then thwart him is gripping.  Quinton’s father has truly found some scary partners in this novel and the odds are overwhelmingly against Harper and Quinton.  The personal struggles between Harper and Quinton and between Harper and Carlos create rich and poignant moments in the novel.   There is still quite a bit that is rich, gripping, and wonderful about Revenant.  However, it is difficult to expand on how everything moved without most importantly giving anything away and with struggling with the slightly off feel we had.  The final ramifications of the confrontation with Quinton’s dad will have rippling affects to Harper.  The experiences of this mission initiated changes in Carlos and Quinton.  It would be interesting to see how much these experiences have altered them.

If you have been following the Greywalker series, this book is a must read as it resolves the issue of Quinton’s father.  It also gives closure in some ways to Carlos and to a certain degree, Harper and Quinton.  We wonder if there isn’t a possibility of a spin off with Carlos as the central character.  Or perhaps a series about Quinton’s niece, whose fate at the conclusion also seemed significant but yet undetermined.  Either way, if you have enjoyed the Greywalker series, you must read Revenant to find out what happens.

Turmoil, sickness, and destruction are sweeping through Europe—and its effects are being felt all the way across the world in Seattle. Harper Blaine and her lover, Quinton, suspect that Quinton’s father, James Purlis—and his terrifying Ghost Division—are involved.

Following a dark trail of grotesque crimes and black magic across the Old World, the pair slowly draws closer to their quarry. But finding and dismantling the Ghost Division won’t be enough to stop the horror that Purlis has unwittingly set in motion.

An ancient and forgotten cult has allied with Quinton’s mad father. And their goals are far more nightmarish than Harper and Quinton—or even Purlis—could ever imagine.

The pursuit leads to Portugal, where the desecrated tomb of a sleeping king and a temple built of bones recall Harper’s very first paranormal case and hold clues to the cult’s true intentions. Harper and Quinton will need all the help they can get to avert a necromantic cataclysm that could lay waste to Europe and drag the rest of the world to the brink of war.