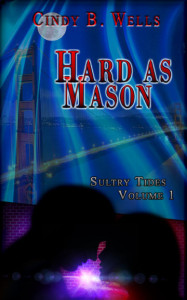 “We don’t want to draw too much attention, and if I’m standing next to you…Well, I don’t think I’ll be able to stop myself from kissing you.”

It took all her will power to stop herself from closing her eyes and turning to kiss him right then, in front of anyone who chose to watch. “Yes, good idea.”

“This place is amazing,” Laura said to Stephanie.

“Yeah, it’s beautiful. As are some of the guys,” Stephanie spoke so the women sitting with her—other assistants and managers—could hear her. They began laughing as Stephanie cocked her head and looked past the women to check out some guys wearing the day’s suit and tie. She looked back at Laura and offered an arched eyebrow.

“What?” Laura tried to play innocent.

“Oh, you’ve got to see this,” Stephanie said so her companions could hear. “Come on.” She grabbed Laura’s hand and led her around the bar to another room of the club.

“So, what took you two so long? As if I don’t already know.” Stephanie spoke quietly through a smile.

“No, no. Nothing happened,” Laura attempted a bluff causing Stephanie’s eyebrow to climb and her head to drop with suspicion.

“Uh, huh. Laura, I don’t care if you guys did anything. I think it’s great. Actually, it’s about time you had some fun with a real man. Don’t try to deny something happened tonight; it’s written all over your face,” Stephanie giggled.

Laura’s brow furrowed and she rubbed her forehead.

“Look, don’t worry. I won’t tell anyone. It’s between you and Mason,” Stephanie whispered.

“Is it really that obvious?” Laura asked.

“Probably just to me because I’m with you so much. But don’t sweat it. Your secret is safe with me,”Stephanie paused. “Come on. Let’s have some fun.” She started walking back to the women who had moved to a couch that had opened up. The pair joined the others and sat down as a waitress took their drink order.

From her vantage point, Laura could turn her head a bit and see Mason across the large room. He sat facing her from another round of couches. He was talking to some of their coworkers and continued speaking as he looked at her. She started blushing when she noticed a subtle smile forming in the corners of his mouth. She bit her lip and looked down at her drink.

She raised her head to take a sip and join the conversation with the other women. It felt good to have a relaxing evening of laughing, chatting, and listening to great music instead of going home to silence after so many evenings filled by her soon-to-be ex-husband’s stressful demands and accusations. After sipping down another martini, she lost track of the time and hadn’t realized an hour had passed. When she again looked in the direction of Mason, her face grew solemn when she found him missing from his seat. Actually, most of the people in his group had left for home, as did some of the people sitting near her on the couch.

Laura felt a twinge of panic growing in her chest. Had he left without her? Did he change his mind about wanting to be with her? No, she tried to convince herself. Perhaps he just went to the bathroom, or over to the bar. She tried to remain inconspicuous as she scanned the room to see if he was still present. She couldn’t find him. Sadness washed over her. She felt foolish and wanted to escape.

“Oh, no. Hang out some more, Laura,” one of the women implored through her faintly slurred words.

“No, I think I’m going to make a quick stop in the lady’s room and head home,” Laura said as she rose to her feet. Everyone said their goodbyes.

Laura asked a waitress where the restrooms were located and followed her directions to a curvy hallway that looped around away from a back room of the club. A blue glow filtered down through more of the rippled-water lighting. She opened one of the many doors into an individual bathroom housing a toilet, a sink made of glass and a small table under a white orchid plant. Next to the table was a chair on which she set down her jacket and purse.

She wet a paper towel and dabbed it on her forehead and neck. Her mind was swimming with questions. She leaned against the cool wall and looked around the room. She was pleasantly surprised by the care taken to continue the club’s design in the restroom. There were more glass tiles of ocean blues and greens above a beautiful mosaic of a tropical reef that rose up from the floor.

Laura finished up in the bathroom, grabbed her jacket and purse, and opened the door to leave. The door was still shutting as she started down the hall, but someone had been standing behind the door. They grabbed her from behind and pulled her around, pressing her out of sight and inside the blue bathroom before locking the door. It was Mason.

“I’m not going anywhere without you,” he said as he pressed Laura against the cool wall. She dropped her belongings and they wrapped their arms around each other exhibiting frantic desire. Their mouths became ravenous with passion as their tongues danced and their breaths grew deep. They moaned with relief after suffering through more than an hour of longing from being separated by a large room and the watchful eyes of their co-workers.

2 responses to “Sunday Snippet: Hard as Mason by Cindy B. Wells”