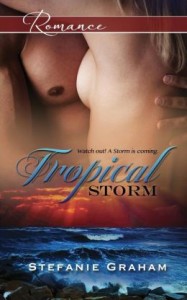 Time sped by or maybe stopped, Cairo wasn’t sure.  In that moment all that was important to him was that she was coming closer.  The ivory caress of her skirt brushed his thigh before his senses identified her for who she was.  Even then he couldn’t believe his eyes.

She fell to her knees in front of the child and hugged him.  She barely even noticed Cairo watching them his heart clenched in an almost forgotten pain.  He thought he would never have to see her again, but there she was – Jessica… Storm.

“Shane!  Don’t you ever wander away from me again!  I was so worried.”

At her words, Cairo stood up abruptly drawing her gaze to him.

“Thank you, sir, for taking care of my s–” She stopped abruptly as their eyes met.

“Son?  That was what you were going to say wasn’t it, Jessica?”  The child looked about six years old.  She’d wasted no time.  The knowledge burned.

She froze for a second before a smile spread across her face.

It felt like she’d stabbed him; blood-red bitterness poured forth.  He’d learned to control his emotions since his youth; however, so he didn’t let his expression betray his feelings.

“Life’s funny, isn’t it, Jessica?”  His tongue fumbled over the unfamiliar use of her first name.  “The last time I saw you I was certain that I never wanted to see you again.”  He turned to leave.  “Nothing changed.”

“Cairo?”  She reached for his hand, held on and wouldn’t let go.

Cairo felt the touch everywhere, starting at his toes, sending shock waves of sensation through his body and alarms going off in his brain.  None of this inner turbulence showed on his face.  He cocked a brow, an affectation he’d learned from her butler Salvador on that fateful night.  It worked; she released him.

She looked down at her son.  “Shane sweetie, will you wait over there for me?”  The child skipped away and she tuned back to him.  “Cairo, it’s been a long time.  I’m glad to see you.”

“I wish I could say the same.”  He said his mind already hard at work.  How had she found him?  If she’d come to Jamaica deliberately to see him then she was truly industrious.  When he’d left New York City six years ago he’d covered his tracks well, leaving all connection to the city and its painful memories behind.

“Wait, can’t you stay and talk for a while?” she asked her gaze roaming over him, lingering on the changes that six years had made.

“I don’t have anything to say to you.”  He said trying to be nonchalant.

“Catch up?  Is that why you came here, to catch up?”  The words came out harsher than intended.

“Jessica,” Cairo said, struggling not to shout.  It was getting easier to call her that now.  “I have nothing to say to you.  So if the purpose of your trip was for us to “catch up” then you’ve wasted your time.”

“You’re not the reason I came.”  She responded flippantly.  “Jamaica is the perfect place for a holiday.”  The words came out smoothly but when his gaze pinned her, her lashes swooped down to hide her eyes.

“One question before you go.”

Cairo stopped but didn’t bother to turn around.

“Since when do you call me, Jessica?  You never used to call me by my first name.”

He considered not answering.  After all, what difference did it make now?  Still, his own bitterness surprised him along with his sudden and immediate need to hurt her.  He felt transported to the time six years ago and all he could remember was the damage she’d inflicted; it was his turn to inflict some damage of his own.

“Storm was an illusion, a figment of my imagination.  In my heart she died six years ago in a motel room.  She was the woman I loved and you killed her.  Don’t ask me about her again.  As far as I’m concerned, she’d dead and buried.”