Today I am happy to welcome author Jeffe Kennedy to That’s What I’m Talking About. Jeffe is here to share a little bit about her new release, Rogue’s Paradise. Please help me welcome Jeffe! Also, be sure to stop back later today for Una’s review of Rogue’s Paradise.

Many thanks to Jen for hosting me here today, to celebrate the long-awaited release of Rogue’s Paradise – third in the Covenant of Thorns series and the culmination of Rogue and Gwynn’s adventures and complicated love affair. This has been such a journey for me, too, as book 1, Rogue’s Pawn, was my first published novel. It took me a long time to get that book placed, as it didn’t quite mesh with anything else out at the time. Since then, the genre of Fantasy Romance has really blossomed, with more and more readers discovering both the genre and this series over the last two years.

(Note: if you want to read what happens just prior to this excerpt, you can find it on the Contemporary Romance Café blog on Monday, September 8.)

“What happened to the flying monkeys?”

“They’re gone.” He cupped the back of my neck, tilting my head so he could nibble the sensitive underside of my jaw. I melted, moaning a little. “You are delicious, powerful Gwynn. That was far more than I needed. I’m glutted with you.”

With a flick of a disgusted thought, Darling Hercules jumped down from the saddle, mentally muttering about there being no mice in this prey-forsaken place.

“What did you do? How do we know they won’t keep coming?” I asked, my breath coming unevenly.

“I…reversed them in a way. Instead of finding us, they go backwards.”

“I’m flattered you think so.” He found my mouth again, kissing me long and sweet and deep, rocking against me.

So help me, I wanted him like nothing I’d felt before. As if all the months of buildup, all that teasing and torment, had layered on, fueling my desire just a bit more with every encounter. This close to him, to his deeper thoughts and emotions, I knew Rogue felt it too. The unbearable need to bury ourselves in the other.

All those times I’d said no. All those arguments and my determined resistance. I might have paid my life debt to Rogue by promising to bear his child, but I’d at least been able to forestall those consequences by refusing his seduction. All come to nothing.

I’d never agreed and I’d still lost that battle. I hadn’t quite assimilated that I was truly pregnant. Titania had forced us—tricked, manipulated, however you wanted to split the hairs—into doing the deed, but then she’d removed the memory afterward. It had happened weeks ago. Or months, as time in Faerie flowed in a different way. Titania had restored the memories and informed me of the pregnancy in a neat double whammy meant to lay me low. I was still reeling from the rawness and violation of the rape. Technically I’d done it to Rogue, but I counted Titania as our true rapist, as she’d pulled the strings.

I could let that go now. No more defending myself from the embryo I already carried. I could say yes, finally.

“If you say no again, it might kill me,” he growled, biting my lip again, then laving it with his tongue.

“Even though you’re immortal?” I teased.

Something inside me released at that moment, old scar tissue breaking open, finally yielding up that tight, binding pain. A rush of gladness followed. I didn’t have to fight this anymore.

Not letting me go, raining kisses on my upturned face, Rogue swung down from Felicity, in a feat of strength and grace that had me gasping. He smiled, the fanged lines around his beautiful mouth twisting with the movement, loving that he’d impressed me.

His magic swirled and he laid me down on a bed of velvet he’d wished into existence, stretching himself beside me.

“Doing magic left and right now?” I asked him in an arch tone. 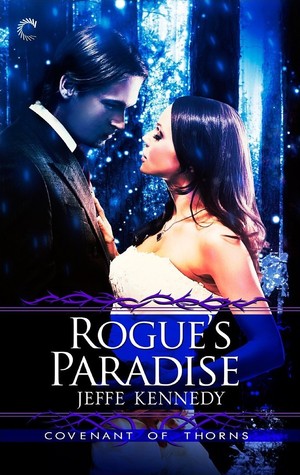 “Yes. I am overflowing with you. And still you feed me more. Let me have more.”

With a choking sound and some incoherent emotion I couldn’t discern, he fell on me, fingers twining into my hair, holding me in place while he kissed me in that drugging way that swept all thought aside.

I meant it too. For the time being, at least, I just wanted to enjoy him. Savor the moment without worrying how much I might lose to his magnetic personality. He’d said he loved me and, though it might not mean to him what it did to me, I wanted to believe in that. Even if it had been in the heat of battle and the crushing aftermath. I only wished that I could touch him in turn. At least loosen the band that tied back his hair.

But I couldn’t use my hands. Thanks to the handy anesthetic magic of Darling Hercules Goliath—I was trying to remember, though the name chain was getting ridiculous—I mostly didn’t feel anything. The makeshift bandages swaddling my hands, however, both mittened me and hid from view the lethal claws that had made a ruin of my fingers. The feline spirit that had recently taken up occupation in my soul had helped defeat Titania, but it also wanted out and needed my flesh to do it.

Nothing to do about it at the moment. Rogue had promised we’d fix it and we would. For now I wanted not to think about it, to simply seize the moment and savor Rogue.

Besides, I had other means at my disposal. A lowly scientist in my previous mundane life as a university professor, I’d become a sometimes distressingly powerful sorceress, with even my least notion coming true until I learned to control it. A hair tie was far more easily dealt with than, say, an army of flying monkeys. I vanished it, and the black silk cloak of Rogue’s hair fell around us.

“I am looking forward to the moment,” he commented in a wry tone, “when I manage to sweep your thoughts away in truth.”

“You’ll just have to work harder.”

“Oh, sweet Gwynn, I fully intend to.” He untangled his hand from my own hair and put it on my bare leg, raising my skirt. I stared into his fulminous eyes, riveted.

Pregnant, possessed, and in love with a man I don’t dare to trust-those are the consequences of the risks I took to save my life. But Faerie, the land of blood and magic, is filled with bitter ironies, and the bargains I made now threaten me and my unborn child.

The darkly sensual fae noble Rogue still tempts me to danger and desire. As we await the birth of our child, I’ve been forced to question whether our offspring is part of a bargain Rogue once made to save himself. He can’t tell me the truth due to a spell the vicious Queen Titania has him under. Would he betray our family against his will? Could I ever forgive him if he does?

Rogue insists on an eternal commitment from me, even as Titania’s forces close in on us. I don’t know if Rogue and I can withstand her onslaught, or that of the beast within me. But I will not stop looking for answers-even if it brings the walls of Faerie crashing down.