Today the writing team of Serge and Moira Stelmack, aka S.M. Stelmack, drops by for a fun, albeit a bit unconventional, author guest post. They are here to share more about their newest title, Midnight Everlasting and their series, The UnderCity Chronicles. Please help me welcoming Serge and Moira to That’s What I’m Talking About.

The Starbucks was virtually empty when Serge arrived. Just a pair of giddy-looking young brunettes who’d been liberally imbibing the café’s beverages, and a 40-somethng knockout in a tight leather jacket, calmly sipping her latte by the corner.

Moira Stelmack. His partner in crime.

Together they’d been on some wild adventures, many of them well outside a PG rating, but as strong as their bond had grown he wasn’t sure how she was going to react to what he had to say today. Ignoring the over-caffeinated baristas he took a seat across from her, not waiting for an invitation.

“Thought you hated this place.” She smiled, her green eyes lit with her trademark tease. She’d been thrown enough in life to not take anything too seriously. Especially him.

“This time of day it’s quiet,” he replied. “And we’ve got business to take care of.”

“I mean business business,” he clarified. “A blog called That’s What I’m Talking About.  They’ve been kind enough to invite us to write a post.”

She pouted a little, swirling her coffee. “You’re no fun, and you know what they say about all work and no play.”

“Moira, this is serious.”

“I want to tell people about The UnderCity Chronicles.”

Immediately he had her full attention, her casual demeanor evaporating as quickly as the steam from her latte. “Serge, those books are dangerous. They’re not what people are used to reading. Hell, they can’t even be classified as a specific genre. And the secrets—you really think the public’s ready to learn the story of what went on—what’s going on—beneath their feet? If they knew half the truth most of them would probably never be able to sleep with both eyes closed again.” 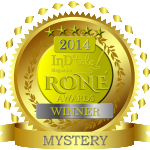 Serge knew she was right. The Chronicles were a chimera of a series. They’d won the 2014 Rone Award for Best Mystery, but even with that label people couldn’t agree on what they were. Romantic Urban Fantasy seemed to fit the bill, but so did science fiction and horror. And yes, they weren’t for the Twilight crowd. The story of smart, strong and gutsy heroes and heroines pitted against a species of living madness was certainly not for blushing virgins. No clichéd vampires/werewolves. The horror of the moles was far more visceral than such pedestrian monsters could ever be.

But as unconventional as The Chronicles were, one thing was for sure. “The readers need to be told.”

Moira downed her latte like a shot of jack, then fired the paper cup a good ten feet, landing it right into the tiny garbage slot meant for stirring sticks. “The story’s international,” she said, not missing a beat. “The first novel in New York. The next in London. The third in Paris. And some of the characters are pretty edgy. Take Jack Cole, for example. What the moles did to him makes my skin crawl, yet he still had the guts to hunt them. And Zephanie Sweetly’s an unabashed crime queen who’s tough enough to take on the horror with nothing but an attitude and a pet rat named Blackball. I’d say we’re going to need some pretty think-outside-the-box readers for this puppy.”

For a long moment she just stared at him, gauging the veracity of his words. Judging his commitment. “If we do this there’s no going back. And I’m sure that’s bound to get to the moles. When they find out we’ve made The Chronicles public we’ll have to unplug the phone and move to Zimbabwe.”

“Wouldn’t be far enough,” said Serge, taking her hand in his. “So I need to know. Are you with me?”

She nodded. “So when you going to write this blog entry?”

He took a careful look around and then slid a flash drive across the table. “I just did.” 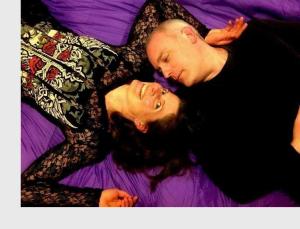 S. M. Stelmack is the pen name for the writing team of Serge & Moira Stelmack.

They aim to give readers what they like in a story— gutsy men and women, high stakes and LOL lines. Serge is the storymaster who blasts out the beginning, middle and end. Moira comes behind, clucking and hemming, as the story undergoes countless rewrites till it meets their vision. She’s also the media relations manager, senior editor, marketing VP, director of operations (domestic and foreign), comptroller and the one who makes sure that Serge has a steady supply of cola while he works.

They live with their two kids, and several other strange pets, in a land of wintertime sunshine and snow and summertime mud and mosquitoes. Actually, it’s not that bad. The snakes in the local lake aren’t venomous. 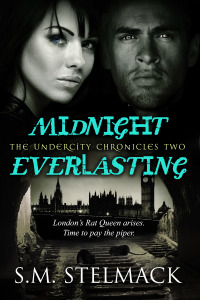 Be sure to come back later today for Vampbard’s review of Midnight Everlasting.