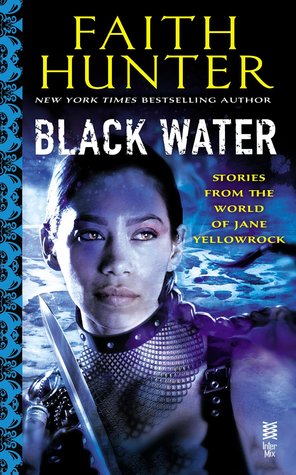 Jane Yellowrock is back in this trio of short stories that go a long way toward easing the wait between full-length novels. Told from Jane’s perspective, they provide a more thorough look at some previously seen minor characters, introduce a few brand new ones, give readers a glimpse of a younger Jane just starting out, and reaffirm that, no, she really doesn’t get any down time. Ever. They’re also a good reminder that Jane is adept when it comes to vengeance, and that, very often, retribution is extremely satisfying.

“Black Water,” which takes place between Blood Trade and Black Arts, finds Jane headed back to Chauvin, Louisiana to tie up some unexpected loose ends related to the last job she and her business partners were hired to do. Forced to track a violent escaped convict through the swamps, Jane enlists the help of a one-of-a-kind werewolf and his dog, as well as the wonderful Younger brothers. The situation quickly becomes more urgent and disturbing than Jane could possibly have anticipated, but, then again, everything Jane does seems to follow that pattern, so that’s not really a surprise. While I found parts of the story unsettling, the punishment Jane delivers here is darkly enjoyable, and reaffirms that Jane plays the role of avenging angel exceedingly well.

The next story, “Snafu,” is the shortest offering in this collection and tells how Jane began her evolution from orphan to vamp hunter. We are also treated to one of her earliest interactions with her Beast, which I enjoyed a great deal. The younger Jane is just as wary as she is later on, and her economy of conversation is likewise as entertaining and consistent. The best part of this story, for me, however, is the excitement Jane expresses once she’s alone. It’s a single, bittersweet moment colored by the reader’s knowledge of the events Jane has yet to face, her unguarded enthusiasm both beautiful and a little sad to see.

Of the three stories, “Off the Grid” was definitely my favorite. In the final story in the collection, Jane is acting in an official capacity as Leo’s Enforcer to rescue a missing vamp from a religious cult. Jane is cool and capable here, and has no trouble holding her own in the company of unfamiliar vampires. The Younger brothers make another appearance, I was very happy to see, since Jane’s relationship with the two has become one of my favorite aspects of the whole series. We are also introduced to several new characters, including Nell Ingram, who is likable and quirky, and will be getting her own series soon.

Overall, Black Water is a good addition to the Jane Yellowrock series. As is true of the other books I’ve read in the series, these tales have a dark quality to them, this time in the form of women who are being abused and are in peril. But, Jane and Beast are ferociously determined when it comes to saving those who are victimized, Jane’s recognition of her own shortcomings having made her even better at what she does. Having missed a couple of the short stories leading up to this collection, I was a little lost during the beginning of “Black Water,” but that didn’t hinder my enjoyment of the title as a whole. I definitely recommend picking up these stories if you’re a fan of the series, and, thanks to the included sneak peek at the first two chapters of Broken Soul, I am even more excited about what might be coming next.

In Snafu, a young Jane shows up for her internship with a securities firm. But before she even gets her foot in the door, she’s accosted by two street toughs and is forced to draw on her new-found Beast-magic to defend herself…

In Black Water, Jane encounters a dire situation involving an escaped prisoner and endangered hostages. With a helpful—and oddly sane—werewolf, Jane goes after the criminals, but can she stop them in time to bring the kidnapped women home alive?

In Off the Grid, Jane goes on what looks like a simple mission for the Knoxville blood-master—finding a missing Mithran. Her search leads Jane to a young woman named Nell, a woman with a scarred past and a strange power, a woman who may hold the key to saving the missing vampire, if Jane can convince her to assist.

One response to “Review: Black Water by Faith Hunter”