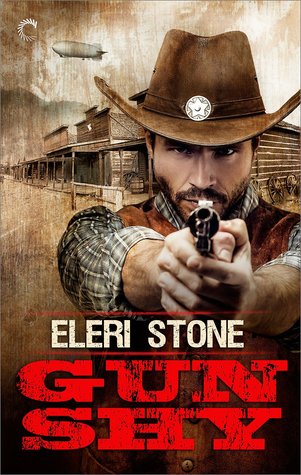 The Reaper series is a wonderfully original, cross-genre series that mixes a bit of paranormal, sci-fi, and old west adventure in an alternate timeline romance. There are Reapers, men who have contracted a virus, becoming flesh-eating zombie-like creatures; Rangers, men and women who are immune to the virus, with the job of protecting the border communities; and Scrapers, the upper echelon of society who live in the foothills and mountains free from Reaper attacks. Gun Shy opens about one year after the conclusion of the first book in the series, Reaper’s Touch, and deals with the political ramifications of a newly discovered serum that cures the Reapers.

Lieutenant of the Rangers and second in command to Captain Jones, Lyle is placed in charge of the fort while Cap travels to the Scraper capitol with a delegation to discuss the Reaper virus and the future of the Ranger units. Lyle’s best friend and fellow Ranger is Cam. A couple of years ago and unknown at the time to him, Cam fathered a child with Jane, who received compensation for raising a future Ranger. Unfortunately, the child died and Jane held captive by an abusive man until Cam rescued her and brought her back to the fort. Since that moment, Jane has relentlessly chased Cam in hopes of having another child; meanwhile Lyle keeps quiet how much he truly adores Jane. When someone from Jane’s past steals the fort’s supply of Reaper antidote, Jane and Lyle journey out to face down Jane’s past and retrieve the serum.

I really like Lyle. He’s a typical good guy, strong male lead who’s got his head on straight and falls for the pretty girl. It’s apparent that he really likes Jane – not just for her body – but is valiant and loyal to his friend Cam. However, he also doesn’t want just a casual sexual fling with Jane, which he knows is all she’s willing to give. I adore that he comforts Jane when needed, but doesn’t take advantage – nor does he let her take advantage. I enjoyed watching Lyle work things out to make the best decisions possible. I also love how he’s so protective of Jane, yet respects Jane’s strength and treats her like and equal.

While I found Lyle a worthy romantic lead, Jane on the other hand was not one of my favorite characters. Jane starts the book desperate to be with Cam, blind to the intentions of anyone else. She is so determined to have him that she thinks it is love, so I was relieved when Jane realized her own independence and truth behind her feelings for Cam when going off with Lyle. However, Jane is a do-now-think-later kind of gal and it didn’t really work for me. Often she ignored the sound advice of the experienced Lyle, and her behaviors came across self-centered. While things usually worked out, her attitude bothered me, and I felt she was terribly moody. In addition, I never felt a true relationship developed between the pair. To me, it just seemed like Jane went from chasing one man who didn’t want her to being with another who did. Lyle and Jane aren’t bad together, and in fact, they make a sensual pair, but I just never felt a true love develop between the two.

The story’s plot is centers on the retrieval of the stolen Reaper serum, which leads Lyle and Jane to several different locales. As the story unfolds, the layers of subterfuge increase, creating multiple interesting dynamics and scenarios. In addition, there are a few well-timed twists that aren’t overly shocking, but exciting nonetheless. I also liked the scenes told from Abby and Jakes’ perspectives – learning more about the rarely seen Scrapers. I find the dynamic between the wealthy Scrapers and the working men and women of the plains fascinating. It is the political ramifications of the discovery of both sentient Reapers and a cure for infected Reapers that really grabs my interest. Unfortunately, after a strong start and several scenes with Abby and Jack, these scenes drop off and that piece of the overall story arc remains wide open.

In the end, I enjoyed Gun Shy, and I find Ms. Stone’s world completely fascinating. The concept and stories are original and exciting. I especially enjoyed the furthering development of the conflict between the Scrapers, Reapers, and Rangers. However, as much as I wanted to love Lyle and Jane as a couple, I never felt a strong connection between the pair, and frankly Jane started to annoy me with her often rash behavior. Although I found the romantic storyline subpar, Gun Shy is still a fun, western adventure, and I look forward to reading the next title in the series.

Before the cure, Lieutenant Lyle Dalton’s job was simple: kill the Reapers. Now, under orders to inject all captured flesh eaters with the serum that restores their humanity, his Rangers at Fort Dougan face entirely new dangers. Someone wanted the Reaper cure badly enough to spill blood for it, and Lyle needs to steal it back if he hopes to hold the border.

Jane Fisher escaped Scraper crime boss Gideon Moore with only the clothes on her back. What he took from her can never be replaced, but her new home at Fort Dougan is the first safe one she’s known. Or was, until the remaining supply of serum was stolen, flown high into the mountains on Gideon’s command. Serving as Lyle’s guide through Scraper territory means revisiting her own personal hell, but it’s also an opportunity—for closure or revenge, Jane isn’t quite sure.

Beautiful, proud and haunted, Jane is a temptation Lyle’s worked hard to avoid. The mountains are the last place she needs to be. But if Jane can find the courage to face down a man like Gideon for the sake of the fort, no force on earth will keep Lyle from her side.

Reviews in the Series:
Reaper’s Touch by Eleri Stone (Reapers #1)

One response to “Review: Gun Shy by Eleri Stone”