Posted September 3, 2014 by B. in Paranormal Romance, Rating A, Reviews Tags: Bs-review, Heart of the Wolf series, Sourcebooks, Terry Spear

Hero of a Highland Wolf 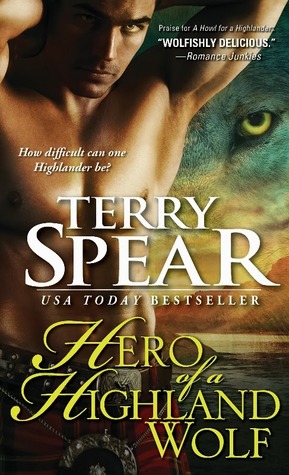 Alpha through and through, Colleen Playfair is used to calling all the shots in her life, and has in no way needed, or wanted, anyone else’s approval. Having been raised in America by an alcoholic father, she is thrilled by the prospect of inheriting the Scottish castle that her family called home for generations. Fighting with the stubborn male currently managing the premises is a less-than-appealing proposition, but she’s never backed down before, and isn’t about to start now.

Having dealt with one absentee (and usually drunk) heir from the Playfair family already, Grant MacQuarrie is determined to run off the newest owner of Farraige Castle before she can upend everything his clan has done to protect it for so many years. Yet, despite the warnings from his best friend, Ian MacNeill, about feisty American she-wolves, Grant is certain he’s up to the task. He soon learns, however, that, while assumptions and arrogance are never a good combination when dealing with a headstrong “lass,” sometimes surrender can lead to the sweetest victory of all.

One of the characteristics of the Heart of the Wolf series that I have enjoyed over and over is the temperament of the main characters. Colleen is an alpha without a true pack of her own, and has been fending for herself ages. Unlike other characters of similar dispositions, however, she is swift to acknowledge when she doesn’t have the full story, and knows the value of making amends. Grant, like his fellow Highlanders before him, is bullheaded but well intentioned, and watching him flounder before changing course was both funny and sweet. Colleen’s reluctant admiration of the other alpha was likewise completely understandable, and I loved seeing them both finally give into their mutual desires. Things get pleasantly steamy between the two quite a few times in this relatively quick read, proving yet again that Ms. Spear has a knack for writing sexy shifters and plenty of lighthearted erotic tension.

While the romance between Colleen and Grant is certainly the most prominent facet of the story, Hero of a Highland Wolf also brings to culmination a long history of greed and betrayal surrounding the estate itself, and nicely ties off all the loose ends uncovered during the course of the narrative. As an event that has been a mainstay of the Heart of the Wolf novels thus far, the bad guy gets it in the end, and watching this particular nemesis meet his unfortunate demise was a guilty pleasure I’d looked forward to since his introduction. While not a surprise, given the pattern these stories follow, the happy ending was very much welcome, and an enjoyable occasion all around.

As is true of Ms. Spear’s other novels I’ve been fortunate enough to read to date, the Heart of the Wolf series has been a lot of fun from the beginning, and this newest addition is no exception. Packed with brawny Highlanders and determinedly capable women, this story has something for just about anyone who appreciates a lighter touch when it comes to shifter romances. With action, kilts, and plenty of humor, Hero of a Highland Wolf is another keeper by one of my favorite authors in the genre, and I sincerely hope that there are no plans to end the series anytime soon.

She’s ready for change…
Colleen Playfair has never been to Scotland, but when she discovers she must spend a year and a day overseas learning to manage her newly inherited estate, she’s ready for the challenge. She even has some ideas for improvements-if she can get past the sexy werewolf who seems convinced he’s the one in charge.

But he’s digging in his claws…
Grant MacQuarrie and his clan have been managing Farraige Castle for three centuries. The last thing he wants is a meddling American heiress trying to change the way things have always been done. He’s more than willing to fight the she-wolf every step of the way, using every tool at his disposal. And if that means taking the lass to bed, well…all the better.

Locked in a battle of wills, caught in an attraction they can’t escape, Colleen and Grant must find a way to work together…or face losing it all.

Purchase Info:
Hero of a Highland Wolf (Heart of the Wolf #14)

3 responses to “Review: Hero of a Highland Wolf by Terry Spear”