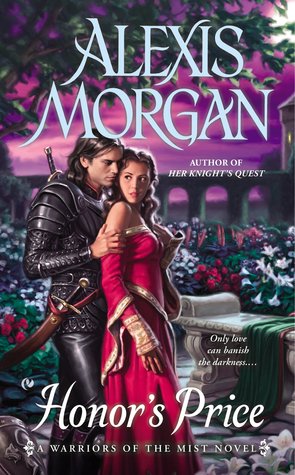 Honor’s Price is the third and culminating book in the story of the Warriors of the Mist. In the previous two books, readers learned about the five damned warriors for the Lady and Lord of the River, destined to an immortal existence of being called from the river to help those in need. Most recently, the honorable Lady Merewen requested aid from the Warriors to combat a growing evil spreading across the kingdom of Agathia at the hand of the evil Duke Keirthan. After winning small battles against the Duke and his men and with time growing short, the Warriors prepare for the final showdown.

The plot of Honor’s Price focuses on the warrior Kane, who carries the visible mark of a dark mage upon his face. In order to discover how to best defeat the Duke, Kane, along with comrade Averel, enters the capital undercover as a mercenary looking for work. Because of his proclivity for magic, the Duke recruits Kane for his personal guard, hoping to use the dark magic within Kane to fuel is own evil creations. However, Kane finds an unlikely ally in the Duke’s sister-in-law, Lady Theda, who lives at the mercy of the Duke’s machinations. With time running short, the Warriors of the Mist must find a way to save Lady Merewen’s land from permanent darkness.

Overall, I enjoyed the Warriors of the Mist trilogy, and recommend the series for fans of fantasy and romance; however due to the overarching nature of the story, I would not recommend starting with Honor’s Price. One thing that I enjoyed most is that the book neatly wraps up the entire three-book saga and continues sharing the stories of previously featured hero/heroine pairings.

Although the book is the final chapter of the trilogy and shares multiple points-of-view, the focus of the romantic interest rests with Kane and Lady Theda. The pair is an unlikely match that I adore. Kane is dark and although he has done much good in the name of the Lady of the River, the dark mark he wears creates a heavy burden on his soul. In addition, knowing he only has a handful of days until he and his fellow warriors are judged and must return to the river, his focus is aimed solely on defeating the Duke. It is wonderful when the Lady Theda captures his heart from the first moment he sees her, and Kane must decide if he can afford to share his affections and the truth of his quest.

Lady Theda is also a noble warrior in her own right. After the current duke murdered his brother, her late husband, he kept Theda around to use her for her resources and fortune. Theda tolerates and sacrifices much to keep those under her protection safe. I admire her tenacity and courage, although sometimes it made me a bit nervous, worrying how it would get her into trouble! But it also helps create delightful chemistry between Theda and Kane.

I like Lady Theda and the match with Kane. As is true of all of the pairings for the warriors, I appreciate the openness and honest each pair has between partners. Theda and Kane are no exception. Their mutual attraction and innate kindness draw the pair together and lend to an easy, early love during this time of high stress. Plus knowing that the warriors are not long for the earth, Kane gives his love to Theda openly, which is totally swoon-worthy.

Due to this being the final story in the trilogy, there is a lot that occurs in the pages of Honor’s Price. In addition, the author has the challenge of tying up all of the loose ends and concluding the overall story arc. While I mostly enjoyed the outcome, I felt that at times the subplots collapsed into simplistic solutions. In addition, one thing that bothered me was the number of times the deities reached out directly to the Warriors and seemed to contradict their own edicts. For example, after centuries of fearing the power and wrath of the God and Goddess if they use magic, now suddenly the warriors are told directly by their deities that it’s all okay. The change in not only the apparent attitude of the Lady and Lord of the Lake, but also the change in behavior by reaching out directly to the warriors, created some annoyance on my behalf. However, in the end, I was pleased with the closure that came with the tale.

Honor’s Price is the final story in the Warriors of the Mist series. It hit all the right notes, wrapped up all the open story lines, and came complete with a predictable, yet satisfactory conclusion. Overall I enjoyed the series and each book. I am happy with the outcome and glad that the author completed the entire story arc. At times Honor’s Price seemed a bit predictable and even simplistic, but I honestly didn’t mind it because I grew to like the Warriors of the Mist and their companions. While I wouldn’t recommend reading Honor’s Price as a stand alone, I do recommend the trilogy to fans of fantasy or period romance.

The Warriors of the Mist have fought side by side for centuries, but Kane alone has felt something darker calling to him.  With the Kingdom of Agathia on the brink of rebellion, Kane knows that relying on dark magic to infiltrate the enemy’s court is dangerous but necessary despite the cost to his soul.

Lady Theda hopes to end the tyrannical reign of Duke Keirthan, the man who killed his own brother—Theda’s husband. But she has little hope of succeeding, until a mage-marked warrior appears.

For the first time in centuries, Kane is tempted not by dark magic, but by a woman who wants more than his protection. But with both of their hearts—and her people’s lives—in jeopardy, giving in to their passion may be a risk too great to take…

One response to “Review: Honor’s Price by Alexis Morgan”