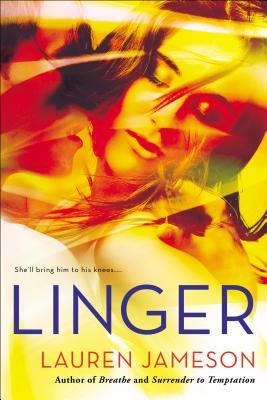 If you’ve not read Lauren Jameson’s In Vino Veritas series, you’re in luck. The third – and final – installment, Linger, has released and you can book-binge on the trilogy! I highly recommend all three books in this series. While you don’t necessarily have to read them in order, it is highly suggested by this reader.

Scarlett is a deep character. As she was getting to know Logan, she took her role as a Domme seriously and asked for help from her mentor when needed. This made me absolutely adore her. We can’t all have every tool in the chest for every eventuality, and by asking for help, this made Scarlett human – not just another character in a book. The fact that she was learning from Logan during the day, and acting in her role as Domme by night showed her versatility and her eagerness to learn. Even when plagued by worry that she wasn’t doing her job as Domme, she was able to divide her roles and perform her daytime tasks by Logan’s side.

Logan is an alpha male that chooses submission in the bedroom for a host of reasons. And all those reasons make me love him more and more every second. He’s the typical ‘tortured warrior’, and every layer of his past that is revealed makes me love him more. There’s a lot of people like Logan out there, and I connected with him from the start because IRL, I am that alpha and in control in most aspects of my life. There’s times when I need a break from making decisions. One easy place to let that happen is the bedroom. Logan has so much passion, it hurts to watch him TRY to submit to Scarlett. Even when he’s doing his best to put that alpha part of himself away, he initially struggles. A. Lot. It takes so much effort for him to see himself as submissive in the bedroom that it’s painful to watch. As Scarlett broke down his walls – and there was definitely breaking happening here, folks – Logan didn’t resent her for it. Logically, he knew she was doing her job as his Domme, and learning what she needed to do to give him peace. Peace does have a price for Logan, however. And when that level of trust is finally reached, it’s definitely a beautiful thing.

I loved watching Scarlett and Logan’s story unfold. I’m not generally a big fan of cowboys and wide-open spaces, but Linger may have won me over for that particular sub-genre of romance. I wish I could say more about how much I loved this book, why it moved me so much, and how poignant it was. But that would be spoiler-ish, and I think that everyone into the genre should go pick up the entire In Vino Veritas series.

On her last night in Nevada before embarking on a yearlong veterinary internship, Scarlett Malone is celebrating—and looking for one night of incredible pleasure. But the man who draws her eye is not her usual type: He’s a cowboy whose alpha-male tendencies tempt her beyond belief. Scarlett can’t understand why she wants this man and no one else, but she’s determined to entice him to submit…

Dr. Logan Brody lives an isolated life in rural Montana, running a ranch and suppressing his submissive tendencies. Only on his occasional trips does he give into his hidden urges. He can’t deny his scorching attraction to Scarlett or that she makes him want more, but he never lets anyone break him down fully. He’s hers for one night and one night only.

But when Scarlett shows up at Logan’s door as his intern for the year, he realizes that the walls around his heart are about to crumble—and that this sexy dominant woman has no intention of letting him keep control…

Reviews in the Series:
Blush by Lauren Jameson (In Vino Veritas #1)