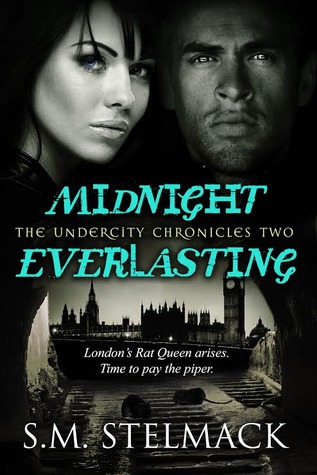 This dark urban fantasy, tinged with romance, immediately reminded me why I liked Undertow, the first title in The UnderCity Chronicles by husband-wife team, S.M. Stelmack. I still missed Jack, but was delighted to see Reggie make an appearance. The new main characters are engaging, and battling similar horrors as the first title described. With a LOT more at stake.

Yup. Still pre-1992 Stephen King-esque. The creeptastic creatures crafted by the Stemacks are straight out of nightmares. No. Lie. I’m pretty sure I’m going to be giving manholes a wide berth for awhile, once again. And, for some strange reason, I’m thinking a rat might be a good pet.

Even though the setting (underground London) kinda creeped me out at first (thoughts of all the decay and generally gross stuff in those ancient tunnels?!?! *shudder*), the descriptions weren’t anywhere near as graphic as the first title. I’m okay either way on that, btw. When Whitechapel was mentioned, my head immediately went to Jack the Ripper. I actually had a lot of déjà vu moments while reading, courtesy of some history class I took in college. I thought the descriptions of the settlements ‘down below’ were well-done, and I felt as though I was experiencing these cavernous places with the characters.

Zephanie is part of an underground hierarchy. She’s technically the maven, and although she is young, she seems to have no interest in the role at the onset of the story. I thought it was really interesting to watch Zeph grow in to the Rat Queen. I like the way her mind worked, her independence, and the way she was a take-charge girl. Part of what drew me to Zephanie was the expectation that she was ‘destined for greatness’. As the oldest child of the former Rat Queen, Zeph had mismatched eyes – one blue, one grey. This genetic marker signifies the descendants of the original Sweetly (family surname) that ruled the London underground. We learn about gifts and talents passed down through generations. Her diary was part of the story, and I found it interesting that the authors chose to infuse the history of the Rat Queen in that way. It worked. I’m not usually a fan of diary entries amidst a novel, but this really worked. What solidified my girl-crush on Zephanie was the fact that she never begged or groveled. She was all ‘love me as I am, or don’t…even though you’re my ONE, and I’ll love you until the end of time.’

Tom Coyle, Zephanie’s ONE, seemed like he was along for the ride. Even though he wanted to find his son, it seemed like he was really looking for his own salvation, and he found that in Zephanie’s arms. I mean, not literally. Tom’s son went missing ten years ago, and he was a hot mess over it, still. Ruined his marriage. At the beginning of the story, he was really hateful toward Zephanie’s family and their business in the London below. I mean, he’s all law-abiding, and her family arranges safe meetings for the most crooked businesses in town. Pretty cool dichotomy there. But Tom was all kinds of messed up. He had severed ties, it seemed, with anyone that may have pointed out that he needed to let go of his need to find his son. He was really alone in the world, and I think that when Zeph came to him, with news that she might have a lead on his son, he came alive again. My initial reaction to Tom was that he was sort-of bad ass, but he didn’t take care of himself well enough to be a force to be reckoned with. Does that make sense? Through the title, Tom had a few epiphanies. Watching these form and take shape was part of that ‘awwww’ moment I get when I read.

So, this is an urban fantasy. But the romantic element in Midnight Everlasting is evident the minute you see Tom and Zephanie on the page together. As matter of fact, when I neared the end, I was glad to have a break for a family commitment. When I picked it up later, things resolved so that I’d be a happy camper. The sexual tension between the two is palpable for pretty much the entire book. There were a few times when I may have yelled, “Do her already!” But, ultimately, the Stelmacks did a fabulous job with their characters and their relationship; I’m satisfied with the ending. Fans of Egyptian history will be thrilled that Isis makes an appearance. Those with penchants toward science and technology won’t be sorry they picked up this title.

Midnight Everlasting, while it’s the second book in The UnderCity Chronicles, could be read without reading the first title. A few references to characters in the first title aren’t really that important, and would be easy for most readers to float over. The introduction of a character from the first title really doesn’t reference the events that took place, either. I’m eager to read the next title in the series… Paris, here we come!

Reviews in the Series:
Undertow by S.M. Stelmack (The UnderCity Chronicles #1)