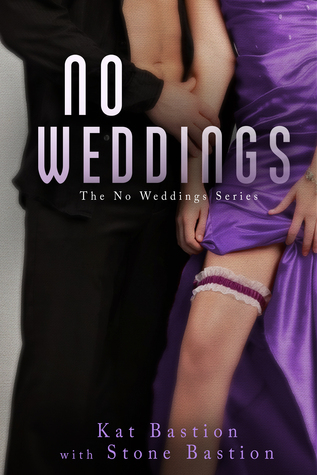 I’ve known about the No Weddings series for a while. I can’t believe it’s finally here, though! I was excited to read the newest by Kat Bastion, and her co-writer and otherwise duly noted partner in life, crime and fiction, Stone Bastion. And if I fan-girl a little bit during my review, forgive me ☺

This series is about the development of a relationship. A sturdy, solid, for-the-long-haul relationship. We don’t have insta-love here, folks. And we get book 1 of the series completely from Cade’s point-of-view. Male. Point-Of-View. I loved his narrative voice and the way we got to see the inner dude and how hard he was falling for Hannah. His inner turmoil. How he wrestled with his own demons. How he has tender and thoughtful moments. Most of all, how he is patient and thoughtful.

Cade, a.k.a. Kincade, is an anomaly in romance. He’s not all caveman, thumping his chest to impress a woman, outwardly. At the onset of the story, Cade is Mr. No-Strings-Attached with a list of booty-calls. On a STICKY NOTE. He’s the epitome of bachelor-dom, living with his friend, Mase, and has another friend – Ben – that seems to casually drop-in whenever the mood strikes. I think that he lives in a pseudo man-cave, but there’s a hint of civility that seems to be infused into his domain. And humor. So much humor, my face hurts from smiling as I read.

One of the most poignant passages I read made me stop and think: “Life didn’t have to be good or bad. We didn’t have only one predestined road to follow. Life existed not in the black and white, but in the gray.”  And it’s significant because I think it shapes the way everything evolves for Cade and Hannah. It’s realistic, and wrought with emotion if one stops and thinks about how it applies to themselves.

As the synopsis states, Cade owns and runs a bar. He’s successful and the bar is a success. He’s also starting up a party planning business with his three sisters. One of the rules established was that Cade couldn’t sleep with the help. And when Cade has to go into negotiations to contract with Hannah to exclusively use her baking talents to supply confectionary goodness for their parties, he spouts off this gem:

“A trifecta of sibling code, business code, and bro code obliterated the weak hold I had on my grumpy mood.”

Hannah, from Cade’s perspective, begins as an ‘ice queen’. We learned about her from Cade’s interactions, and it seems as though his suppositions about her demeanor ended up evolving into something with which I, as a reader, was quite pleased.

Eventually, Hannah does warm up to Cade. They become friends, spending a lot of time together in the name of further developing her newly-launched business. And the attraction between them becomes evident. Charged with innuendo, their interactions become a fabulous volley of double entendre between the couple. Their banter is part of what endears Cade and Hannah to me. They remind me of myself and Mr. VampBard.

Not only does Hannah build a relationship with Cade, she also builds one with his friends. Hannah regularly cooks dinner for Cade and his bros. It’s a great way to get to know so many aspects of a guy – getting to know his friends.

“No other girls were allowed at these sacred dinners. We hadn’t outright discussed the subject, but in unwritten guy code, we wanted Hannah all to ourselves. She’d become one of us with her raunchy banter and fearlessness. She was ours. And we didn’t want to share.”

Even as Cade was about keeping his time with Hannah to himself, he did allow his sisters to get to know her. And allowed Hannah to find a place within his family. Like another sibling. But not quite. It’s just a wonderful coincidence that she gets along with the family.

As much as No Weddings is about building a relationship, it’s also about healing. Both Cade and Hannah have been hurt in the past. Getting beyond the hurt and betrayal and moving on is something that most everyone can understand and with which readers can identify. Watching threads of fear unravel, watching confidence build – and the way the Bastions convey these inner feelings is nothing short of amazing.

I want to talk about the balance of the series for a minute. One Funeral, the next title, is from Hannah’s perspective. From the blurb, it seems to pick up where No Weddings ends. Two Bar Mitzvahs, title number three, is back to Cades point-of-view. Three Christmases is from both Hannah and Cade’s perspective. There’s a novella, For Valentine’s, slated for publication in January – and this is the final title in the series (and from Cade’s POV). Readers won’t have to wait for one book per year to release to finally get the whole story about Cade and Hannah. Just a few months. If I have gotten any gut reactions whatsoever about the No Weddings series, it’s that Kat and Stone Bastion are putting together 240ish pages at a time, and crafting their plot through the eyes of the natural narrator that came forward while drafting. And I adore this concept. I think it’s important – especially when the ultimate Happily Ever After (HEA) is reached in stages, or over time – that readers get into the heads of both main characters. I feel like I know Cade already, and I can’t wait to get the next title so I can learn about Hannah in a little more direct manner.

Kat and Stone Bastion have managed to create two real characters with which readers can commiserate as well as laugh. And love like their best friends. I’m honored to have had the pleasure to meet Cade and Hannah, and look forward to watching their sassy relationship continue to unfold.

I think I have my act together as a successful bar owner, my master’s degree within reach, and a list of no-strings-attached women warming my bed. Turns out, I don’t.

Hannah believes she has safeguarded her wounded heart by shunning men and focusing on her new baking business. The thing is, she hasn’t.

When my three sisters and I form an event-planning business with Hannah as our baker, I have no idea how my life is about to change. As Hannah and I work closely together, the attraction between us becomes irresistible. And complicated. I’ve promised my sisters I wouldn’t mix business with pleasure. But I’ve never been one to follow the rules.

9 responses to “Review: No Weddings by Kat & Stone Bastion”