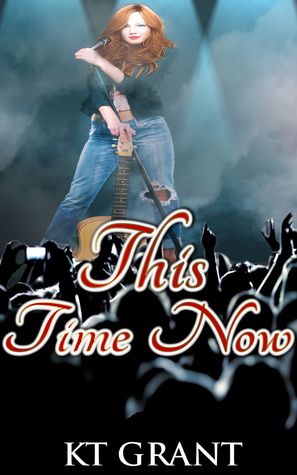 This Time Now
Author: KT Grant
Reviewer: B.
Rating: B+

Regret is never an easy thing to live with, but coming face-to-face with its source when you least expect it can be heartbreaking. Amanda Barkley and Billie Layne had big plans together before tragedy and circumstance tore them apart. Now, six years later, Billie is back and Amanda is still angry and hurting. While forgiveness isn’t a simple thing, second chances don’t happen often, and both women are about to learn that holding on to the past too tightly could cost them the very happiness they’ve been looking for.

In This Time Now, Ms. Grant makes good use of the notion that opposites attract when telling Amanda and Billie’s story. From the beginning, I thought Amanda was a very likable character. At a little more than five feet tall, blonde, sweet, and pretty, she’s well liked by those around her. Despite the fact that she seems to be fairly independent, she’s surrounded by some well-meaning people who have her best interests at heart. She has sacrificed a great deal for those who need her, but has managed to build a life for herself that works. It’s not how she imagined things would be; yet she seems content to look ahead from where she is. I couldn’t help but want her to be happy, my reservations over her former girlfriend’s intentions aside.

Billie, on the other hand, I didn’t care for at first. Her initial arrogance and presumptuousness did nothing to help me see her as a sympathetic character. Billie returns home after attaining the fame she left to pursue six years ago, as well as having a major health scare, with the notion that she can just reinsert herself into Amanda’s life and that they’ll pick right back up where they left off. Thankfully, it didn’t win Amanda over any more than it did me, and while I felt sorry for what Billie had been through, I was glad that Amanda resisted for as long as she did. It isn’t until Billie realizes she can’t bulldoze past Amanda’s resistance, and experiences a real dose of fear and potential loss over the situation that she begins to be honest with Amanda, as well as herself, making the inevitable ending much easier to accept.

This Time Now is a very short tale of regret, forgiveness, love, and new beginnings. While I think Billie should have had to work a little harder to win back Amanda’s trust, she has had some tough moments of her own. Though they aren’t exactly equal in severity, both women have made mistakes, and both have a need to follow their hearts, regardless of the risks. Given the choice between dwelling in the past and starting anew, I feel like Amanda made the best decision that she could, and it really was nice to see her happy again. I would have liked to get to know them a little better than was possible within the confines of a narrative of this length. Should Ms. Grant ever expand the world of This Time Now, and there are certainly enough interesting secondary characters that she could, I’d very much like to explore where this series might lead.

Twenty-three year old, Amanda Barkley works as a kindergarten teacher and part time server at Sisco’s, the most popular bar in town where most of the bands who perform there go on to become some of the biggest names in music.

One day a blast from Amanda’s past arrives back in town. Her former next door neighbor, Billie Layne, one of the biggest rock stars of the decade has returned home. The one person she wants to see most of all is Amanda who she hasn’t talked to since she left six years ago after a big fight between them. When Billie was offered a recording contract, but had to move to California to accept, she wanted Amanda to come with her. Amanda was more than willing to follow Billie anywhere, but then her mother almost died in a car accident and is paralyzed, never to walk again. Amanda refused to leave her mother’s side. Billie left without a backward glance.

Now that Billie is back, she wants to renew their friendship in the hopes they can become lovers again. Billie will do whatever she can to get Amanda back, even though Amanda fights knowing Billie could break her heart and leave her again for the promise of even bigger stardom.