To Love a King 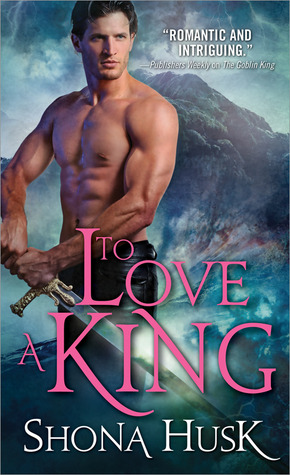 To Love a King is the third novel in the interesting Court of Annwyn series.  Although this novel is the culmination of the previous books, and major story arc is resolved, the series is far from over.  We wonder what is in store for the future of Annwyn.

NOTE: If you have not read the previous two books, there may be mild spoilers for you in this review.  The books in this series build upon each other, even though a different couple is the focal point of each novel.  Read this review at your risk.

It is winter in Annwyn.  With the Queen imprisoned and the King dying, it is time for Prince Felan to take the throne.  But to do so he requires a human queen and heir.  Felan does not want the fate his father had – a queen he does not love.  Unless he can win back Jacquie, he will either be in the same predicament, or killed by a rival to the throne.

Gikany and Una have been intrigued by Prince Felan since we met him in the first novel.  He was aloof and kept much to himself.  In the Faerie Court, he could only confide in those he absolutely trusted if he was to survive… and everyone knows you cannot trust a faerie.  However, in To Love a King, we finally get to see behind Felan’s façade to the real person he is.

Jacquie has every reason not to trust Felan.  Neither Jacquie nor Felan fully recovered from the painful ending of their relationship.  There is a great deal pain and resentment between the two.  We admired the strength of both characters.  What was frustrating was the lack of communication.  So much is riding on them working things out, especially for Felan, and yet instead of laying it all out, Felan slowly reveals what he wants and needs, and the price to Jacquie will have to pay.  It was frustrating, but considering who Felan is and especially his upbringing, it isn’t surprising.

What is sweet about their journey is that they both know that they cannot be happy without the other.  It is this core belief that allows us to cheer for them as they come together.  Although Jacquie has everything to sacrifice, Felan has everything to lose.  The juxtaposition is fascinating.  Watching them finally open up to each other was as passionate as it was freeing.

As the novel concluded, the antagonist is thwarted in a way we were not expecting, and we are left with questions.  Without giving away key points of the novel, we hope in the next book some of those questions will be answered.  However, we are left with great hope as spring is emerging in Annwyn.  If you enjoy a fascinating romance novel within a complex faerie realm, pick up the first book in the Court of Annwyn and see how lost you can get in the world.

HE’S TRYING TO RECLAIM THE PAST
To keep the balance between good and evil at the court of Annwyn, Prince Felan ap Gwyn has two weeks to marry and take the crown. But he wants more than just power—he wants love; a love he once had but was too stubborn to hold on to.

SHE’S STRUGGLING TO FACE THE FUTURE
It took years for Jacqueline Ara to put her life back together after Felan abandoned her. She’s moved on, even if her heart still burns for him. But with war in Annwyn looming and death bleeding into the mortal world, Felan and Jacquie will need to heal old wounds and rekindle the passion that once welled between them… or face losing everything.

Purchase Info:
To Love a King (Court of Annwyn #3)