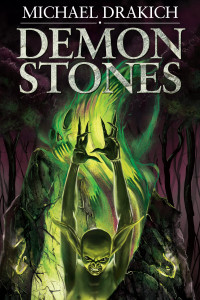 The window was open and the night breeze cooling. He stared out at the field where he had labored. Such were his days, when not in school. Tomorrow, he would return to class and escape the drudgery of working round the home but, in the meantime, he could no longer abide staying there that evening. He climbed out the window and headed for the meadow.

It was always a place where he was able to find a certain level of contentment. He reveled in the gentle gurgle of the stream, the soft whisper of the wind through the leaves of the trees, and the long grass to lie in. A large stone poking out of the grasses made a comfortable place to lean and contemplate things. A number of symbols were carved into it that he did not recognize. He often lay there and traced the figures, trying to guess at their meaning. Even when the weather would chill, for some reason, the stone was always warm.

That night was no different from any other visit as he absently ran his finger over the markings. Why does my father hate me so? I turned sixteen three months ago. That makes me a man. I can go out into the world and find my own place, make my own way. If I left, who would tend the farm? Pap? Not likely. They’d starve without me.

A silhouette on the hill told him someone was approaching. He watched as the stars illuminated his grandfather trudging toward him.

“I figured I’d find you here.”

His grandfather dropped down beside him and pulled a wedge of bread from inside his shirt. “It’s not much, but I couldn’t let you go hungry. Take it.”

“Thanks.” He accepted the bread and took a deep bite.

“You know, you were wrong back there.”

He stopped chewing. Pap was always honest with him and not so quick to anger as his father. He’d give it a shot. “Why? Because, like my father, I take more than my fair share?”

His grandfather glared at him for a moment. “Your father is why you have a table and food to put on it. True, he does take a large share, but know that he needs it to maintain his strength. The life of a tanner’s helper is not an easy one. There are those worse off than you—those with no roofs over their heads, no beds to sleep and who go hungry more nights than not. Be grateful for what you have.”

“Should I really? I go to school and the other kids laugh at my homemade clothes. When my birthday came, I was no longer a child, but a man. After I finish this term, I can no longer go to school but would have to pay for further education. Money I do not have. That will come to an end. My life lies before me at the back end of a plow behind a smelly ox.”

His grandfather said nothing but gazed around. After a moment, he patted Gar’s arm. “I understand. You see no future for yourself beyond this farm. But it is not all as bad as you would make it seem. I was born on this farm. I raised your father and his brothers here. And, back then, we had no oxen. Your father has done well to own such fine beasts. The progression of things takes time. Your children will have more than you. I shall die here, and when I do, it will be not as a happy man but a content one. I did my part.”

“That may be fine for you, but I want more in my life than that.”

His lips tightened. Both of his uncles had joined the army. The kingdom of Sechland was one of the poorest of the seven southern kingdoms. It didn’t even have direct access to the Great Sea. In the last battle with Morica to the east, both of his uncles were killed. The kingdom was still required to pay for passage on the Lorne River that originated in the hills with many meandering creeks like the one beside him. “No, not like them.”

“I thought not. But your moodiness is brought on by this swale. Why do you come here?”

“It’s peaceful. I can let my worries go here.”

“Too peaceful. Listen, what do you hear?”

He craned his neck in an effort to pick up whatever sounds he could recognize. “The same as always. The water in the rill, the wind in the leaves, nothing more.

“Exactly. There is nothing more. No owl on the hunt or mouse in the grass, not even the chirp of a cricket. The dumb creatures of the world know better than to be here.”

The truth of his grandfather’s words dawned on him. “You’re right. I hear none of those things. I wonder why?”

His grandfather slapped the stone. “Here’s why. I’ve never told you the story because I thought you too young, but maybe now it’s time you learned. This…” he patted the stone once more, “is a demon stone. It goes back many a year to before even I was a young lad like you.”

“A demon stone? Why is it called that?”

“In those ancient days, when the Southern Kingdoms were united and our only enemies were the Karsargi to the west, demons were set loose on the land. No one really knows where they came from nor how, but they rampaged throughout the seven realms and Piaxia to the north. It’s said some even raided the badlands where the Karsargi hold sway but no one knows for sure. The only thing we did know was they couldn’t be killed. Neither blade nor fire harmed them. They were finally vanquished by a great warlock from Piaxia named Bron who entombed them throughout the lands in stones such as this. The tales goes, though beaten, the demons still live, trapped forever within the stones. It’s why they’re warm to the touch. It’s said their blood boils. If you listen closely, you can hear the drumbeat of their demon hearts.”

“I’ve been told how demons came and stole children who were bad, but I thought it was just a tale to scare us.” Gar bent and put an ear to the stone. He listened but could not be sure whether it was a heartbeat from inside the stone or the echo of his own in his eardrum. “I don’t know if I hear it.”

“Huh. Well, no matter. Even if the tale is true, there’s no way the beast is getting out of there. It’s been that way for as long as I’ve been around and probably will be, long after I’m gone.”

His grandfather rose and extended a hand. “Come, it’s getting late and you need to return to your room before anyone notices you’re missing. I’ll go back in and make enough noise to cover your climb. Don’t disappoint me.”

Gar grabbed hold and Pap pulled him up. “I suppose you’re right. Thank you for the bread. Let’s go.”

He followed his grandfather back to the house where and true to Pap’s word, he stomped inside, grumbling aloud and clomping into the main room, making Gar’s ascent unnoticeable. After changing into his nightshirt, Gar slid into bed. He was tired. Sleep sounded like a good idea. He laid his head on his pillow and listened as the noise downstairs ceased and all he could hear was the sound of his own heartbeat.