Authors L.A. Witt, Alexis Hall, and Cornelia Grey come together on a Steampunk book tour to celebrate the releases of Precious Metals, Prosperity, and Circus of the Damned.

And Gaslamp Fortnight is featuring a fabulous giveaway! Comment on the tour stops for a chance to win a $250 gift certificate to Harlots and Angels Steampunk Corsetry and get your own custom corset or personalized steampunk gear.

To celebrate, That’s What I’m Talking About has as its special guest, author L.A. Witt here today. Please help me welcome Ms. Witt to TWITA!

TWITA: What drew you to Steampunk to begin with, and what’s your favorite thing about it? Will there be more stories in the Metals series? Any chance for a Steampunk m/m anthology?

Steampunk was something I’d never written before, so I wanted to give it a go, and it turned out to be a lot of fun. My favorite thing is creating cool technology, and using it to make the characters’ lives even harder. (Author = sadist)  I don’t have any steampunk stories in the work at the moment, but more Metals series or an anthology are definitely possible in the future.

TWITA: Most authors like to torture their characters to varying degrees. Which of your characters have you particularly enjoyed torturing, and why?

Pretty much all of them. LOL It’s just fun to take a person, throw them into an awful situation, and see if they have what it takes to get through that situation. And of course, make them fall in love with the worst possible person (their boss, their enemy, etc). It’s fun. As far as my favorites? I’m probably always going to be partial to whichever characters I’m working on at the moment. In this case, I’m rather enjoying tormenting my small town homophobic preacher (Lead Me Not), as well as some particular characters on loan to me from Aleksandr Voinov (Dark Soul 6).

TWITA: It seems like you’ve worked on a lot of collaborative projects in the last couple of years. Do you have to alternate working on the collaborations with your other (individually written) stories? Or, are you able to slip back and forth between the two easily?

I go back and forth pretty easily. It’s not unusual for me to be working on multiple collaborative projects and solo projects at the same time, particularly if a co-author and I alternate chapters (I write one, send it back to them, they write the next, send it back to me, etc).  When I write with Aleksandr Voinov or Marie Sexton, we write in real-time (both of us in the same Google document, watching the other write), obviously I have to be pretty focused on what we’re doing, but after we’ve ended a joint writing session, I’ll frequently shift gears to a solo book. Assuming Aleks and I haven’t just written 20,000 words of our historical book in a single sitting. And yes, we’ve done that.

TWITA: There’s been a substantial increase in the amount of LGBTQ literature that’s currently being written, which is a fantastic and welcome development. What are your hopes for the future of the genre?

TWITA: Which of your upcoming projects are you most excited about? Is there anything in the works that will surprise your fans?

I’d say I’m most excited about Dark Soul 6, which many of my (and Aleks’s) fans are aware of. I had hoped to finish it earlier this year, but had to back burner it temporarily due to some setbacks (an injury, being sick for a couple of months, etc). It’s back in the works, though, and I plan to finish it before I get to Spain in January.  I’m super excited about that one because…I mean, it’s Dark Soul, y’all. Aleks is letting me play with the whole gang—Silvio and everyone—and I’m having soooooo much fun with it. As far as what will surprise my fans… probably Lead Me Not. I’ve mentioned a few times recently that I’m writing a sweet gay Christian romance, but I still think people will be surprised when it’s actually finished and released. I’m… kind of the last person on the planet you’d expect to write something like that.

TWITA: On a personal note, reviewer B. would like to know: Do you have any plans to continue with your webcomic, Marginally Unhinged?

Yes! I didn’t have PhotoShop for a long time due to computer issues, but I have it back now, and I’ve been brainstorming some strips to draw once I’ve caught up on writing. Hopefully before the end of the year. 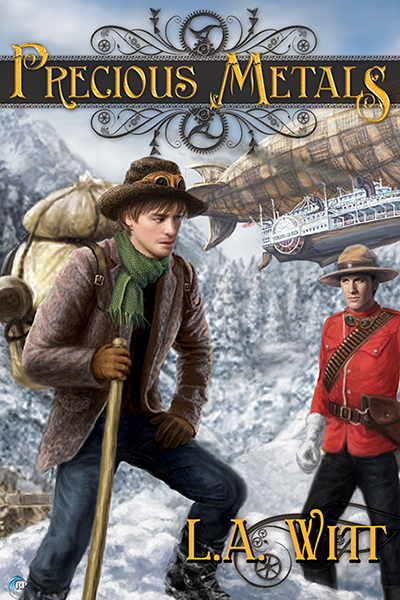 For Constable Paul Benson of the North-West Mounted Police, monotony is a blessing. As a provision inspector below the Chilkoot Pass during the Klondike Gold Rush, he’s seen miserable conditions and gold fever turn civilized prospectors into madmen.

Joseph Starling is on his way to the Klondike to find the men who savagely beat him, murdered his eldest brother, and stole their mining machine. They’ll kill his youngest brother if Joseph doesn’t operate the machine for them—it won’t work without him. With time running out, Joseph must purchase an expensive ticket aboard a crash-prone airship. But the station is miles away through dangerous terrain.

Under orders, Paul grudgingly escorts Joseph, but quickly finds himself intrigued by the young man. As they make their way toward Juneau, it’s not just the need for warmth that drives them closer together. But neither man can draw an easy breath until they make it to the gold fields . . . and there’s no guarantee that Joseph’s brother will still be alive when they do.

B.’s review of Precious Metals can be found here.

Should you encounter Lauren, don’t tell her L.A. is in Omaha. This bio will self-destruct in 17 seconds.

Comment on the tour stops for a chance to win a $250 gift certificate to Harlots and Angels Steampunk Corsetry and get your own custom corset or personalized steampunk gear. Each new post you comment on earns you an entry into the drawing, so be sure to check out the rest of the tour schedule, too! 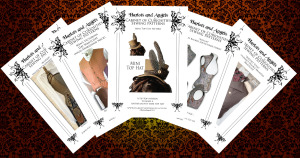 Hello I’m Sharon Ince and I own Harlots and Angels.  We are a UK based company that creates unusual sewing and crafting patterns, clothing, corsetry, props and accessories with a wide range of themes from Steampunk, Sci-Fi, Victorian, Gothic and Burlesque.

We have produced work for a large diversity of clients, including The Disney Corporation, the BBC costuming department, Sky TV, Working Title films as well as several Hollywood production companies and local theatre and film productions.

I have always loved to design and I’m self-taught. In fact I started at the early age of about 5 years old and have never stopped. I love to work with leather, sew natural fabrics, sculpt, and build my house with stone and wood; though my real passion is to design.

When I am starting out on a new design the hours fly by and I’m lost in the perfect bliss of experimenting, mathematical calculation, followed by the thrill of seeing the idea become reality.

My love of Gothic literature, mad inventors and scientists and all things Victorian has always filtered through my thoughts and designs, so when I first discovered the emerging Steampunk community some years ago many of my creations found their family niche.