Today I’m excited to feature a brand new paranormal YA title from author Christine Allen-Riley. Eventide is the first book in her new Iron Fall series.

I left the store and hurried through the parking lot where my dad waited in the car. Aubrey Miller was right behind me, and I really wanted to get out of here without talking to her. I’d almost reached the safety of the car when I caught sight of my dad, and I stopped, unable to move any closer. He’d changed seats leaving the driver’s side empty for me. He’d said that sooner or later I needed to start driving again. I thought I’d at least be able to wait until I was ready.

Aubrey caught up with me. I’d stayed still too long.

“Wow. Your dad’s willing to ride with you? He must have a death wish or something if he didn’t learn anything after what you did to Rachael.” She pushed her cart past me, not even bothering to stick around to see my reaction.

The chilly autumn wind whipped my hair across my eyes, and I wasn’t sure if the gathering tears were because of the irritation, the mention of Rachael or the prospect of driving this soon after the accident. Maybe it was just a horrible combination of the three.  Brushing my hair out of my face, I opened the backdoor and threw my purse and bags inside.

“I’m not ready to do this,” I said, barely meeting his gaze.

“The longer you avoid it, the worse it’ll be later. Just get in.”

Taking a deep breath, I slid behind the wheel and willed my hands not to shake as I started the engine. I’d barely even ridden in a car, let alone driven since the accident that had killed my best friend. I couldn’t believe he just expected me to drive home from here. It hadn’t even been four months.

I swallowed past the lump rising in my throat and shifted the car into drive, creeping forward.

“Devon, c’mon. You’ve gotta go a little faster than that.

An old woman stepped out into the street, and I braked hard to miss her, my stomach lurching violently as it tried to catch up with the car.

“That Abbott woman’s crazy as a damn bag of squirrels,” my dad muttered, shaking his head as I tightened my grip on the steering wheel and maneuvered around the old lady screaming obscenities into the forest on the edge of town. 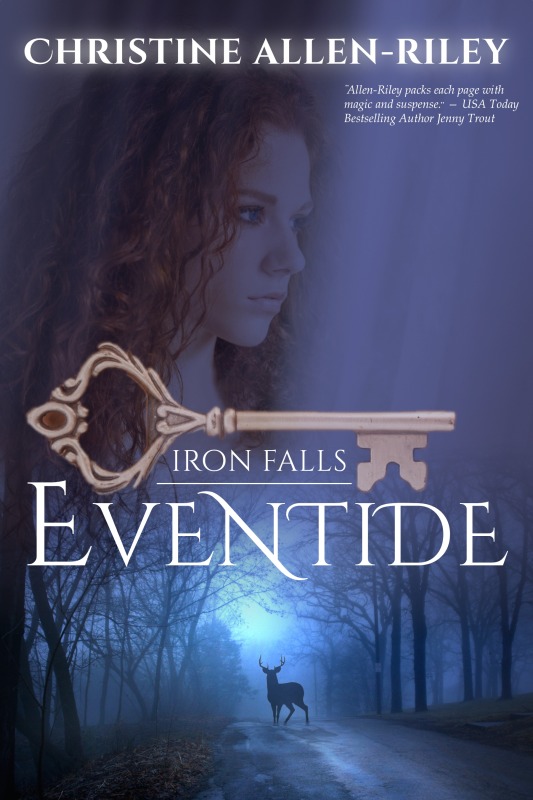 Great. First time driving again, and I almost run over the resident whack-job.

As I approached one of the only three stoplights in the bustling metropolis of Iron Falls, my dad said, “Turn right. I want you to take Twenty-Eight home.”

I glanced at him as I slowed and stopped the car, grateful that I had a red light’s worth of time to try to convince him that I wasn’t ready for that stretch of road.

Before I could even speak, he said, “I know you’re scared, but you need to do this.”

No, what I really needed was to go home and just pretend that the last few months had been a dream. But the light changed, and the honking horn behind me prodded me into motion. Almost on autopilot, I turned right, onto Highway Twenty-Eight. Calling it a highway seemed far too generous. It was a two-lane road through nothing but trees and the occasional mailbox that belonged to a house hidden from sight by the endless forest.

My hands slick on the wheel, I took the curves far slower than I ever would have four months ago. The truck behind me rode my bumper, making me even more nervous as I approached the accident site. I tapped my brakes, hoping whoever it was would back off. Instead, the truck whipped around me, passing with its horn blaring. I was pretty sure it was one of the guys from school. Great.

I thought of the people I went to school with and shrugged. It wasn’t like anyone’s opinion of me could get any lower. I rounded another curve and tried not to stare at the angry-looking skid marks on the pavement where the semi-truck had attempted to stop. For some reason, I hadn’t expected them to be so dark.

“You’re doing fine,” my dad murmured. He had the same tone he used on my little sister when she got hurt and was crying uncontrollably—weirdly sympathetic and exasperated at the same time.

I didn’t bother responding. There was nothing to say. I wasn’t doing fine. I was barely holding it together. A flash of pink on the side of the road caught my attention, and I glanced to the right. My stomach dropped to the floor, and jerking the car to the gravel shoulder, I slammed on the brakes.

“What the hell?” my dad snapped.

Rachael ran through the woods on the side of the road, her long, black hair flying like streamers in the wind. She wore the same pink tank top and jean shorts she’d had on the night of the accident. But the blood I couldn’t forget—even in my dreams—was gone. She kept glancing over her shoulder as if something was chasing her, terror etched on her face.

Ignoring my dad’s questions that were growing louder by the moment, I unbuckled my seatbelt and climbed out of the car to run after her. For a minute, I thought she looked at me. I thought she saw me. But by the time I rounded the hood, she’d vanished as if she’d never been there.

I scanned the trees, frantically searching for her. Nothing moved except the wind through the branches. Where was she? She’d been there. I’d seen her. I was sure of it. Except…she was dead. Tears clogged my throat, but I tried to swallow them back. I’d killed her, and her family had buried her. The grave was so new it didn’t even have a headstone, yet.

My legs were suddenly weak and shaky, and I slumped against the car. I wanted to ask my dad if he’d seen her, too, but the expression on his face told me all I needed to know. He hadn’t. And now he was looking at me like I was the freak of the week. I didn’t know how to explain it, but I knew what I’d seen, she’d been there. Alive. Hadn’t she?

My dad didn’t say a word, just guided me back to the passenger side of the car and urged me inside, buckling up my seatbelt like I was six instead of sixteen. I couldn’t do anything but stare at the trees and will Rachael back into existence. Christine is easily distracted by shiny things – especially good stories.  She loves the hint of a faery tale in the midst of everyday life, and she loves reading and writing YA fiction. She lives in Michigan with her wonderful husband, two amazing kids, and three psychotic cats, where she compulsively crafts, binge watches Netflix, and plots to do terrible things to her characters.

One response to “Book Spotlight: Eventide by Christine Allen-Riley”