Stop by and read about GOING ALL IN, the fourth book in Alannah Lynne’s Heat Wave series.

It’s been two years since Callie Holden helped put her father in prison, and since then, she’s learned a lot about life and herself. To Callie’s surprise, she actually likes working and has learned money is a tool to be used for good… or evil. She also realizes that even though she’s traveled the globe, she’s never truly lived. She longs for adventure and to experience a wildly passionate romance. The last place she expects to discover her dreams is in the arms of the ever-surly man she’s dubbed “The Beast.” But when they’re forced to work together, unexpected chemistry changes everything, and in Wade Neumann’s arms, Callie finds the excitement and passion she’s been seeking.

Callie was surprised to turn and find Wade standing in the doorway, arm braced on the casing above his head, forehead resting on his arm.

“Why are you standing there? Come in.”

His breath was slow and deliberate, his smile sad. “I don’t think that’s a good idea.”

“What? Why?” She had zero practice seducing men, but she’d watched Jen approximately two million times over the years. Hopefully she’d picked up on something. Putting an extra swing in her step, she infused a sexy vibe to her walk and crossed the foyer to him. “It’s an excellent idea.” 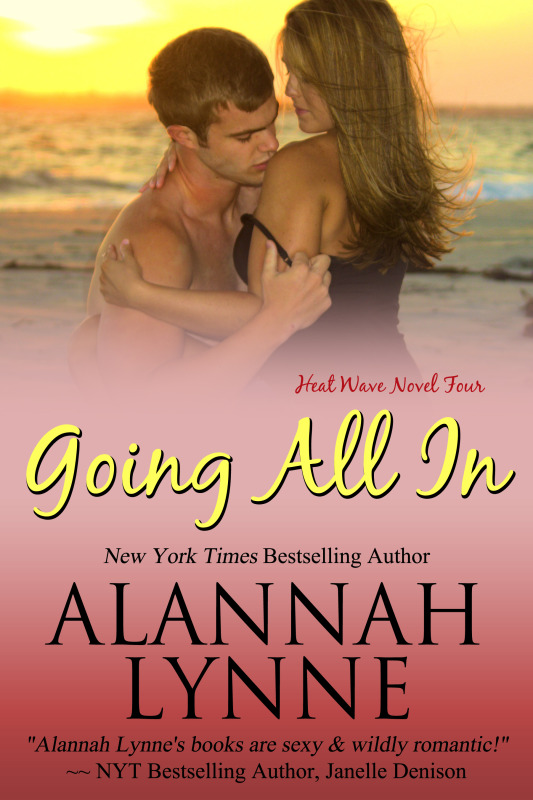 When his grin widened, she thought over her options, then tried a more direct approach. Stepping close enough to run her hands down the middle of his chest, she said, “Seriously, I’m not drunk. The buzz faded on the way home and now I’m just relaxed. At least, I was.”

Her gaze settled on the erratic pulse pounding in his neck, then slid down the center of his chest, over his stomach, to his belt. “Now that we’re alone, I’m not quite as relaxed as I am nervous and excited.” She tried to make eye contact but chickened out and ended up staring at his full and tempting lips. “Very excited.”

He squeezed his eyes shut and pinched the bridge of his nose, then muttered something about being hot-blooded and coldhearted, but definitely not Superman, along with a few other garbled expletives. After a moment, he pressed his lips together, opened his eyes, and stepped into the foyer.

Her heart jumped and the nervous jitters spiked as the door shut behind him with a solid clunk. She wasn’t sure what to do with him now that she had him inside, but before he changed his mind and reversed course, she grabbed his hand and dragged him into the living room.

It had been a long time since she’d been to the bathroom, and while she feared him running away while she took care of business, nature was screaming too loudly to ignore. “I have an assortment of drinks in the fridge. Help yourself to anything that looks good, and I’ll be right back.”

She hadn’t been to church since she was a little girl, but she found herself saying a prayer of thanks when she returned to find him seated on the couch, arms stretched out along the back, legs kicked out in front and crossed at the ankles.

He was the sexiest man she’d ever encountered, the potency made even stronger and more dangerous by his easy confidence. He was totally at ease, while she felt like a cat that had been rolling around in a field of catnip all day. Her eyes and thoughts bounced here, there, and everywhere, trying to figure out the best place to sit.

The chairs across from the sofa were too far away and would knock out any chance for more of those spontaneous kisses or snuggling and cuddling. If she sat next to him, he’d have to turn sideways to look at her and that would quickly get awkward and uncomfortable for both of them. She bit down on the inside of her lip as her gaze settled on his lap. She’d grown comfortable sitting on him at the campground, so why not go with what worked?

She planted a knee on one side of him, straddled his legs, then settled onto his thighs.

His eyes danced with humor as he tilted his head to the side and grinned at her. “Comfy?”

The muscles in his jaw tightened as he clenched his teeth and gripped her waist, stilling her. “Sweetheart, there isn’t going to be a soft spot if you keep wiggling your ass around like that.”

She froze and a gust of heat swept through her. Without conscious thought, her gaze dropped to his lap, and she sucked in a breath as the proof of his words appeared beneath the thick denim fly of his jeans.

His raw masculinity and deeply primal nature melted her ultra-conservative shell, allowing her to be more aggressive than ever before. Her hands burned with the need to touch him, so she started with something relatively safe and familiar—his chest. As she made broad sweeping strokes across the soft cotton fabric of his T-shirt, the heat radiating from him seeped into her palms and turned to lava in her veins.

Even though he wasn’t making any moves of his own, she quickly realized that didn’t mean he was less involved. The rapid rise and fall of his chest and the way his nostrils occasionally flared showed his struggle to control his breathing and possibly even himself.

His reaction bolstered her confidence, so she continued her exploration, going up to his collarbone, then down to his pecs. When her fingers swept across the rigid peak of his nipple, he sucked in a sharp breath and stilled completely.

Unsure if the reaction was positive or negative, she ran a quick body scan, searching for clues. The fluttering heartbeat in his neck along with the rapid-fire rise and fall of his chest seemed encouraging, so she lifted her gaze to his face. The hot, searing hunger flowing from his eyes scorched her and stole her breath.

That look, right there, filled with blazing intensity and desire for her, was something she’d longed to see all of her adult life but had begun to fear she’d never experience.

The carnal longing pouring from him fed her hunger and drove her to continue her exploration. She’d never taken the time—or been given the opportunity—to study a man like this before, and she was fascinated by the breadth of his chest and the sharp ridges and hard lines of his shoulders. There wasn’t enough space between them to allow her to move lower, so she braced a hand against him and slid back to the edge of his knees.

Her fingers bumped across the ridges of his ribs and abs until she ran into the cool edge of his belt buckle. His relaxed-fit jeans were no longer relaxed, and adrenaline zinged through her at seeing how strongly she affected him.

She wanted to continue, but this was well beyond her comfort zone, and fear and insecurity crept in, stealing her confidence and slowing her progress. She paused with her hand on his belt buckle and flipped her gaze to his, silently seeking permission to continue.

Her stomach lurched and nausea rose to her throat as she studied his expression. He had his head cocked to the side, looking at her through hooded lashes, but something in his expression told her to be prepared.

Rejection loomed on the horizon. 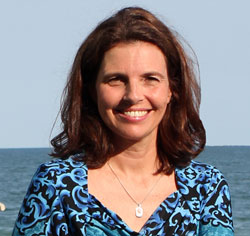 Alannah believes there’s nothing more magical than finding the other half of your soul, experiencing fiery passion, and knowing you’ve found happily-ever-after.

She loves going to work each day (in sweats and a T-shirt) and writing about hot heroes and feisty heroines who torment each other in the most delicious ways before finding their happy ending.

4 responses to “Book Spotlight: Going All In by Alannah Lynne”