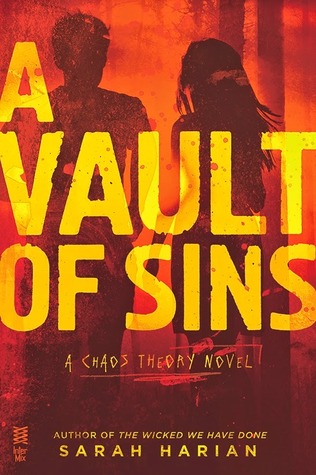 A Vault of Sins is the sequel to The Wicked We Have Done.  This second book had Gikany and Una feeling a little lost, though it was gripping. We liked it but it was not anything that we were expecting.

When we left off, Valerie, Evalyn, and Casey had escaped the Compass Room through great pain and sacrifice.  We thought that this second novel would be about the lawsuit the survivors of the Compass Room brought against its engineers, but surprisingly this is not a courtroom drama.  The trial is over in the blink of an eye and we are left with the aftermath.  Evalyn finds herself drowning in emotions as one trial concludes and she awaits retrial for her original crime.  But she isn’t the only one suffering.  Valerie and Casey are struggling as well and it seems only time will show if they buckle under the pressure.  Evalyn finds herself being teased by someone who seems to know who she is.  Someone who knows more of what went on in the Compass Room and that it is corrupt.  However, as Evalyn follows the clues, she ends up in a place she never would have expected.

Without completely giving away the plot, A Vault of Sins was a complicated sequel.  In the first novel, the main questions were whether or not Evalyn was guilty, and was she truly evil or not?  These questions were answered by the end of the novel.  For this second story, the biggest question is: what is the true purpose of the Compass Room?  In some ways, this novel felt like a retread of the first book.  There were a lot of relived moments.  But through all of this, we continued to wonder where it was all going and what they would ultimately find out. The answer to this we hope is in the next book because we are only given a glimpse of it and it is not enough to be sure of what we witnessed. It was a little frustrating.

Despite that, A Vault of Sins was still a gripping read.  This novel is full of emotions: heartbreak and hope, pain and sacrifice, forgiveness and friendship.  In spite of a weak plot, the characters kept us grounded.  This series continues to be strongly character driven, and we eagerly and earnestly want to know what happens to Evalyn, Valerie, and Casey.  But most importantly, we want to know what the flash of inner workings of the Compass Room really means, and how our trio can put a stop to it.

Even though she’s escaped, twenty-two-year-old Evalyn Ibarra is anything but free. She’s desperate to return to a life that no longer exists, but prying reporters continually draw her back into nightmarish memories, using the tabloids to vilify her. Bad press is the last thing she needs during the trial of the year: the case that she and her fellow survivors staked against the Compass Room engineers. A case that could terminate the use of the inhumane system forever…

But in her dreams, she is still locked in that terrifying jail.

When she wakes, someone is trying to communicate with her in secret, through strange and intricate clues. As Evalyn follows their signs, she uncovers a conspiracy that goes so much deeper than her own ordeal. A dangerous intrigue that only she can bring to light. One that will force her to work with the one person she doesn’t want to see.

The person who owns her heart…