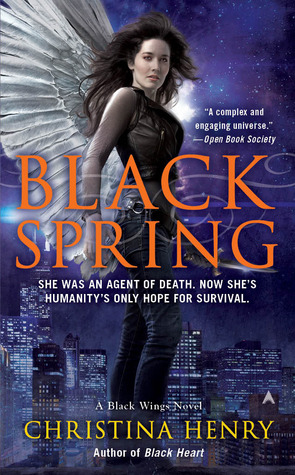 Warning: Black Spring is the final (for now, according to the author) book in the Black Wings series. I do take this fact into account when assigning my rating of the book. In addition, this review does contain spoilers from the first six books of the series as well as potential spoilers from this book.

Madeline “Maddy” Black: former Agent of Death and many-greats granddaughter of Lucifer, pregnant with her son from her recently murdered husband, knows that something dangerous is afoot in her hometown of Chicago. Now that all four of the powerful, god-like brothers, Lucifer, Puck, Alerian, and Daharan, are awakened, it’s only a matter of time before all hell breaks loose on Earth. Together with her make-shift family and great-uncle Daharan, Maddy must find a way to thwart Lucifier et. al. and keep Chicago safe. Unfortunately, there is a mysterious and deadly shifter on the loose, making Maddy’s life extremely difficult. And then there is the matter of Lucifier’s wedding…

Writing this review was difficult for me. *insert heavy sigh* I absolutely enjoyed reading this series from the first book, and I didn’t want to see it end. Although the book contains several of the characteristics that make the series so pleasurable and engaging over the years, I was really unhappy with the way some story lines were tied up. This left me sad and a little disappointed.

One thing that I loved about Black Spring is that the gang is back together after being apart for the last book. The stories are always at their best when the group functions as a team. The dynamics of their support network, friendship, and banter give the stories heart. I adore Beezle, Maddy’s long-time gargoyle companion who is part Jiminy Cricket to Pinocchio and part Xander to Buffy. His snarky wit keeps me laughing, yet it is his thoughtful insight, which is typically on the money, that provides such tender and moving moments. I like how he kept Maddy in check when it came to the growing darkness within her.

I also appreciated Maddy’s own self-awareness. She’s finally figuring out how much power courses through her body, and she owns both the darkness and the light. She’s learning to take time and pick the best course of action rather than always reacting. I appreciate her internal struggles, and I actually LOVED what happens to Maddy with respect to her powers at the end of the book.

As I mentioned, there are some parts of the book that I did not like. First of which is a side character that was introduced prior to Black Spring: Jack, a conspiracy-theory type blogger who reports on the preternatural community. Now that the world knows humans aren’t alone, Jack is determined to expose it all, using Maddy as his springboard to fame. As far as I can tell, the character has no purpose in the story, other than to be a total pain in the butt. He shows up at inopportune and unlikely times, and I felt that his storyline was forced and unnecessary.

While there are a few other incidents that bothered me on a lesser scale, there is one storyline that has bothered me since it took root three or so books ago:  Maddy and Nathaniel. It is upsetting that this strong woman was barely given anytime to grieve the sudden and horrific loss of her beloved husband, and the author already had a new suitor in the wings. While I grew to appreciate the pair’s friendship, I never agreed with the hints of romance and budding love between Maddy and Nathaniel. I mean – she is carrying her dead husband’s child in her womb – it’s ONLY been a few months… WHY does she need another romantic partner in her life? Unfortunately, Ms. Henry chose to continue following this path throughout Black Spring, concluding in a way that left me terribly disappointed, therefore lowering the rating I gave this book.

In the end, I am thankful that the author had the opportunity to wrap up the Black Wings series on her own terms, regardless of my likes and dislikes. It truly has been a pleasure to read, and I still recommend the series to fans of the urban fantasy genre. A lot happens in Black Spring, the final (for now) story of Madeline Black, and it was wonderful to see the team all back together. The story was fast-paced, and I found myself completely engrossed, per usual. I’m happy it ended on a positive note and everything is all wrapped up, even though I am not happy with where the story went in every case.

The author is holding a HUGE giveaway hop! To enter, please see Ms. Henry’s author guest post about the Top Ten Things To Do in October. Prizes include: