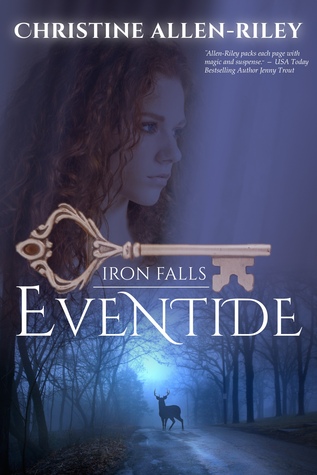 Eventide is the first book in a new young adult series that is quite promising. Gikany and Una enjoyed this slowly building story, becoming completely lost in the heroine’s plight.

The story starts very slowly. We are gently introduced to Devon, the pain and grief she is battling after the loss of her best friend, and her understanding that all is not as it seems in her hometown. As the story begins to unfold, we, along with Devon, learn about the Sidhe who live and hunt in the town of Iron Falls. The tragic accidents that have been occurring are not what they seem to be and that those lost may not be lost at all.

First, we really enjoyed this novel. The tension increases through the novel as the character development, plot, and mythology unfold, and the plight of the characters becomes clear. It is very expertly woven. Though the start is slow, it truly is akin to waiting for the first drop on a rollercoaster ride. Nothing is very clearly cut and we enjoyed trying to figure things out along with Devon – not just the mystery of the Sidhe and how she can save her friend Rachel, but her relationships.

This is a very well done balance between a coming of age story, fantasy/adventure, and mystery. Devon is a down to earth character dealing with some very real and adult issues. Nothing is sugar coated, but it is done gently. It is also handled respectfully and responsibly. Devon was driving on the night of the fateful accident because she was the sober one. The care and concern Devon shows for her siblings. Although nothing is clear-cut and Devon’s world is completely shattered, she is working at putting it in some semblance of order. We liked Devon and we look forward to seeing more of what happens to her and her growth in the next book.

Considering the themes of the novel, we would recommend this to any mature junior high students and above. In spite of the temptations she faces, Devon strives to be conscious of consequences and takes responsibility for her actions. We found we liked her and were rooting for her as she heals and fights for innocents. Though she is a victim of bullying, she works at keeping herself grounded. What helps to keep this story fresh and real is that it is told solely from Devon’s perspective. Her thoughts and feelings as she journeys through are gripping and full of emotions that tug at the reader.

The mythology of the Sidhe mixed with some Native American legends was fascinating as well. We enjoyed the mix of fae legends and how they were blended into this world. The characters were fascinating and we enjoyed what is shaping up to be the overarching plot in this trilogy. The different personalities involved and the agendas are interesting. We cannot wait to see what happens next.

We are happy to recommend Eventide to fantasy fans from junior high through adult. This young adult novel, though slow to start, is gripping with its down-to-earth characters, enchanting mythology and gently ratcheting pace. This journey experienced through Devon’s eyes is heart-wrenching, as it is hopeful, giving readers a heroine to cheer for as we relate. Though we warn you, your nails might become nubby by the end.