Burn for Me
Author: Ilona Andrews
Reviewer: Jen
Rating: A-

Burn for Me kicks off a brand new series from the husband-wife writing team of Ilona Andrews. Their modern-day world has an alternate history, one that saw the development of magical powers in humans. Not everyone has these powers, such as telekinetics and pyrokinetic, and modern society equates the strength of one’s abilities with power and social rank. The authors do a great job laying out this history in the prologue. It is unique, yet familiar enough that it comes together easily.

Several characters are introduced almost immediately, and the reader needs to pay attention because they all come back before the end of the book. Burn for Me focuses on and is told from the first person perspective of Nevada Baylor. She manages and is the primary detective for her family’s investigative agency, which is a subsidiary of the powerful Montgomery House. When Montgomery instructs Nevada to find and detain the well-known pyrokinetic Adam Pierce, she realizes he’s setting her family up for failure, but there is little she can do. Unfortunately, the risks are elevated when Nevada realizes that Connor “Mad” Rogan is also interested in locating Adam. Mad Rogan is the most powerful and destructive magic user in modern times, and he is determined to use Nevada to find his mark.

Although I found myself interested in the story of Burn for Me, it took a long time for me to be completely enamored with the book. I did appreciate the slow world-building; it created a smoldering impression that, in retrospect, was the ideal way to introduce the world and characters. However, for about 75 to 80% of the book, I was interested in reading it, but not completely captivated. But then, suddenly… BAM! I was so utterly engrossed in both the story and the relationship between Rogan and Nevada that I couldn’t put down the book. 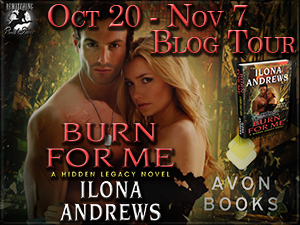 I really enjoyed the heroine, Nevada. She’s smart. I love that she is willing to play the games necessary to survive, but remains focused on what is truly important to her: family. Her tight-knit group adds depth and feeling to the story, and Grandma provides some wonderful comic relief. Her humor had me laughing out loud at times. I appreciated the back-and-forth nature and banter between Adam and Nevada, as well as Rogan and Nevada. Each interaction adds value to the overall story and helps create the whole picture of who is Nevada. And although she has limited magical abilities, I suspect Nevada (and the reader) will learn a lot more before the journey is completed.

Part of the task of finding Adam involves a search for ancient artifacts. Although an interesting journey, I found myself confused more than once during the story. There are several high-action, quick-moving scenes, and at times it wasn’t clear to me what was happening with respect to the artifact pieces. And the closing epilogue also required a couple of re-reads just to make sure I understood the ramifications. With that, I did enjoy the intensity of the action, and the fighting scenes made for some edge-of-your-seat reading.

Along with the action and adventure, there is a hint of romance budding between Rogan and Nevada. I found the pace of their potential relationship very fitting for the story. Their interactions are filled with delicious lust and tantalizing tension, making me want more! Knowing the author’s abilities to write a wonderful romantic storyline (Kate Daniels and Curran!), I think that readers will enjoy the slow burn of Nevada and Rogan’s emerging relationship.

In the end, I really enjoyed Burn for Me. Although I found it a bit slow moving at the start, the book found its pace and came together beautifully long before the end. I enjoyed the mystery of the artifact and chase after Adam, even with my own confusion over the artifact pieces. The overall conspiracy is impressive, especially with the shocker in the epilogue. Rogan and Nevada share some smoldering scenes, and I hope we don’t have to wait too long for the next book.

Nevada Baylor is faced with the most challenging case of her detective career-a suicide mission to bring in a suspect in a volatile case. Nevada isn’t sure she has the chops. Her quarry is a Prime, the highest rank of magic user, who can set anyone and anything on fire.

Then she’s kidnapped by Connor “Mad” Rogan-a darkly tempting billionaire with equally devastating powers. Torn between wanting to run or surrender to their overwhelming attraction, Nevada must join forces with Rogan to stay alive.

Rogan’s after the same target, so he needs Nevada. But she’s getting under his skin, making him care about someone other than himself for a change. And, as Rogan has learned, love can be as perilous as death, especially in the magic world. 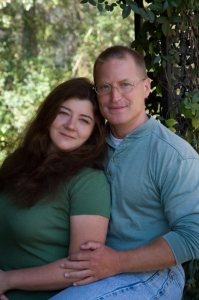 “Ilona Andrews” is the pseudonym for a husband-and-wife writing team. Ilona is a native-born Russian and Gordon is a former communications sergeant in the U.S. Army.

Contrary to popular belief, Gordon was never an intelligence officer with a license to kill, and Ilona was never the mysterious Russian spy who seduced him.

They met in college, in English Composition 101, where Ilona got a better grade. (Gordon is still sore about that.) They have co-authored two New York Times and USA Today bestselling series, the urban fantasy of Kate Daniels and the romantic urban fantasy of The Edge and are working on the next volumes for both.

They live in Texas with their two children and many dogs and cats.

Find Ilona Andrews on the web:

Follow along on the blog tour for your chance to win 1 print copy of Burn for Me along with some Burn for Me swag. To enter, please fill out the Rafflecopter form The giveaway is open during the time specified on the Rafflecopter form. Winner(s) chosen at random from all eligible entries. This contest is open to US Mailing addresses only, where not prohibited by law. Open to participants, 18 years or older, who are legally allowed to participate in such a contest as allowed by their local laws. All federal, state, local, and municipal laws and regulations apply. Void where prohibited. No purchase necessary. By participating in the contest, participants agree to be bound by the decisions of the contest sponsor. Prize will be delivered by the contest sponsor. This blog, its reviewers, and the owner are not responsible for items lost in the mail. By entering this giveaway, participants agree to abide by these terms.

Be sure to hit all of the stops on the Burn for Me blog tour.

17 responses to “Review + Giveaway: Burn for Me by Ilona Andrews”