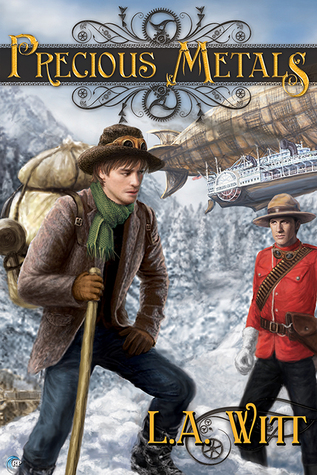 I was very eager to read this title, having enjoyed the first story in the Metals series a great deal, and I wasn’t disappointed. If Noble Metals succeeded in being imaginative and exciting, then this one was even better. Still set in during the gold rush in the Klondike, Precious Metals is the story of another pair of companions-turned-lovers, an invention worth killing (or dying) over, and a perilous journey through the frozen north.

While both stories share certain similarities, there are enough differences between the respective situations of the main characters to allow Precious Metals to successfully stand on its own. Joseph, the younger of the two men, is extremely clever and determined, and more than a little desperate to get back to the gold fields that have drawn so many with the possibility of fortune and a better life. Though the reasons for his initial trip turn out to be less sympathetic than they might have been, the change in his circumstances, along with the likelihood that he could lose much more than wealth, drew me in early on.

Paul, the older and more reluctant of the pair, is likewise somewhat difficult to feel sorry for initially. Ordered to accompany Joseph on the first part of his journey, Paul is resentful of being saddled with the young man whose urgent need to return to the mining camp takes them on a treacherous expedition with no guarantee of a happy outcome. Once Paul’s personal history is revealed more fully, however, his earlier reticence becomes overshadowed by his tentative hope for a better future for himself as well as Joseph, and I found his heroism easy to embrace for the duration of the narrative.

The obvious desire between Paul and Joseph was present from the moment they met, and the pulse of it only increases as the story goes on. Although there were a few moments where it’s not quite as easy to be swept up in their mounting attraction or to accept Joseph’s convictions regarding the ease of what lies ahead for them, the fantasy of their crossing, both geographical as well as emotional, is a solidly enjoyable experience. Once the perils of their excursion begin to wear down their defenses, these two compliment one another in nearly every respect, and watching them explore their growing connection was a real pleasure.

Aside from the Steampunk and romantic elements of Precious Metals, there are plenty of conflicts that effectively maintain a good deal of tension throughout the story. As if the fact that the climate itself is trying to kill them isn’t enough, Paul and Joseph must also contend with the cruelty of men brought about by greed. On several occasions they struggle through almost certain demise, only to meet an even more dangerous hurdle immediately thereafter. The odds are unquestionably stacked against them, which makes pulling for them all the more rewarding.

Precious Metals is a solid addition to the Metals series as well as the Steampunk genre, in general. The time constraints imposed by both the setting and major conflict make it impossible for the story to get bogged down with a lot of superfluous information and side stories. The result is a brisk, suspenseful narrative with likable characters and a “life’s too short” urgency, which compliments the physical and romantic elements between the two men. Although Precious Metals can easily be read as a standalone, I think this series is worth following from the beginning. With the inherent technological potential of the Steampunk, and Ms. Witt’s knack for writing intriguing characters and landscapes, there will hopefully be many more stories in the series yet to come.

For Constable Paul Benson of the North-West Mounted Police, monotony is a blessing. As a provision inspector below the Chilkoot Pass during the Klondike Gold Rush, he’s seen miserable conditions and gold fever turn civilized prospectors into madmen.

Joseph Starling is on his way to the Klondike to find the men who savagely beat him, murdered his eldest brother, and stole their mining machine. They’ll kill his youngest brother if Joseph doesn’t operate the machine for them—it won’t work without him. With time running out, Joseph must purchase an expensive ticket aboard a crash-prone airship. But the station is miles away through dangerous terrain.

Under orders, Paul grudgingly escorts Joseph, but quickly finds himself intrigued by the young man. As they make their way toward Juneau, it’s not just the need for warmth that drives them closer together. But neither man can draw an easy breath until they make it to the gold fields . . . and there’s no guarantee that Joseph’s brother will still be alive when they do.

Reviews in the Series:
Noble Metals by LA Witt (Book #1)

One response to “Review: Precious Metals by L.A. Witt”