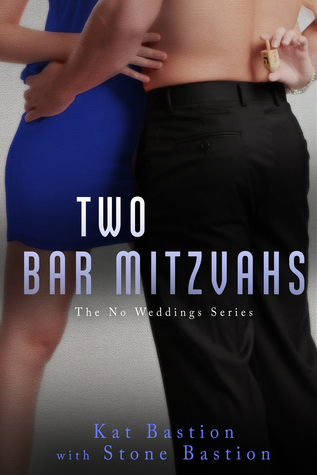 I think Mr. VampBard is going to confiscate my Kindle. I inhaled Two Bar Mitzvahs, and may be a smidge guilty of not really watching a show we were eagerly anticipating. Worth. It. The most poignant moments in the third book of the No Weddings series had me in tears. Since we’re back in Cade’s POV for this book, I was really happy to catch up with him again.

I liked the conflict between Hannah and Cade in this book: the intensity of their emotions. The way it seemed as though Cade’s voice caressed Hannah’s name. The way Hannah’s spine straightened and she fought for their relationship. But what I liked the most about this couple, in this book, was watching them grow closer and closer. Cade’s perspective connects a little more with me for some reason, too. The external conflict? Genius. I’d really like to talk about it, so someone hurry up and read Two Bar Mitzvahs, okay?!?!

Hannah continues to recover from the breakup with her d-baggy ex, and the run-in she had with him previously. I think she’s doing a great job moving forward in her life. She seems to have things together, and really drives the connection between the couple. Just like in real life, sometimes one person is doing all the relationship maintenance, and sometimes it shifts to the other person. That’s what being in a REAL relationship is about.

Cade gets to deal with his past when it walks up to him. Only she’s totally psycho. For real. I’m not sure what Cade ever saw in her in the first place, and I’m glad Hannah trusted in him – in THEM – enough to believe Cade even though things didn’t appear that way (you’ll understand when you read…). I also really liked the way Cade continued to be a take-charge kinda guy, even when he knew he’d have to deal with his ex. What I didn’t like, however, is how Cade gave up in one section.

These books definitely need to be read in order. There’s only 3ish weeks between release of titles, so it’s not forever to wait. I’m glad that Kat & Stone Bastion decided to serialize Cade and Hannah’s story. I don’t think just one traditional novel would tell their story as effectively. Well, that and the fact that if it WAS told the same way it is now, it’d be around a thousand pages, but I’d read every word.

Summer heats up in this third book in the No Weddings Series, where Cade Michaelson strives to balance his and Hannah Martin’s new relationship with the growing demands of his financial success.

Waiting for Hannah has been the best and worst kind of torture. Now I can claim her as mine. We believe we’re done with the past and can move forward together.

Hannah grows stronger than ever as she trusts in me—trusts in us. And when obstacles appear, she shows a surprising fierceness that rivals my own.

However, all is not perfect in paradise. Things get chaotic while I try to juggle multiple businesses, an ex from hell, and a girlfriend I’d do anything to keep. And in the middle of the whirlwind, I recklessly think I can handle everything.

But when all the madness is over, will I have everything I want—will I still have Hannah?