Today M.L. Brennan, author of the American Vampire series, is back for an interview. Tainted Blood (ROC, November 4, 2014) is the third book in this original urban fantasy series. Links to reviews for all three of the American Vampire books are listed below. Big thanks to review team members Gikany and Una (who LOVE this series) for coming up with some awesome questions. Please welcome M.L. to That’s What I’m Talking About.

TWITA: Welcome back to our blog! We enjoy your American Vampire series here at That’s What I’m Talking About. Can you share with us a little about the series and Tainted Blood, the third title, which just came out this month?

ML: Thanks so much! The series is about Fortitude Scott, who starts out in the first book as a complete underachiever and slacker vampire, working minimum-wage jobs and trying to stay as far away from his family and the supernatural as possible. My vampires are also a bit different than the norm – they’re biologically driven, with a life cycle and a reproductive process – so, no immortality, just a really long life and an extensive maturation process. And Fort is your average 26-year-old guy, trying to figure out his place in the world with a completely useless degree and a biological destiny that terrifies him.

By the third book, Fort is starting to really find his place and his direction. He’s grown up a bit – emotionally and in a physical sense, but he’s holding onto his values with both hands. He gets tugged further into the family machine when he has to take over some duties for his brother, whose human wife (#19) has just died. And, of course, Fort is accompanied by his best friend and kickass partner, kitsune shapeshifter Suzume Hollis.

TWITA: The mythology you have created for your American Vampire series is very different from most mainstream vampire mythologies and yet it is very rich and detailed. What was your inspiration? What type of research do you do?

ML: Most of my research for the vampires in my series was biologically driven. I actually didn’t do much research into the mythology of vampires – I felt fairly familiar with it already, but what I was primarily interested in was how to give vampires a life cycle that made sense both as an apex predator which had developed to only have a single prey animal, and as an obligate sanguivore that had parasitic tendencies. So a lot of my reading for vampires has actually been able the life cycle of Great White sharks, and about vampire bats and ticks. I’ve learned quite a lot of fun facts for cocktail parties, let me tell you!

TWITA: Oh wow! That is so interesting! Who is your favorite character? Is it easy to write him/her?  Who is the most difficult to write? 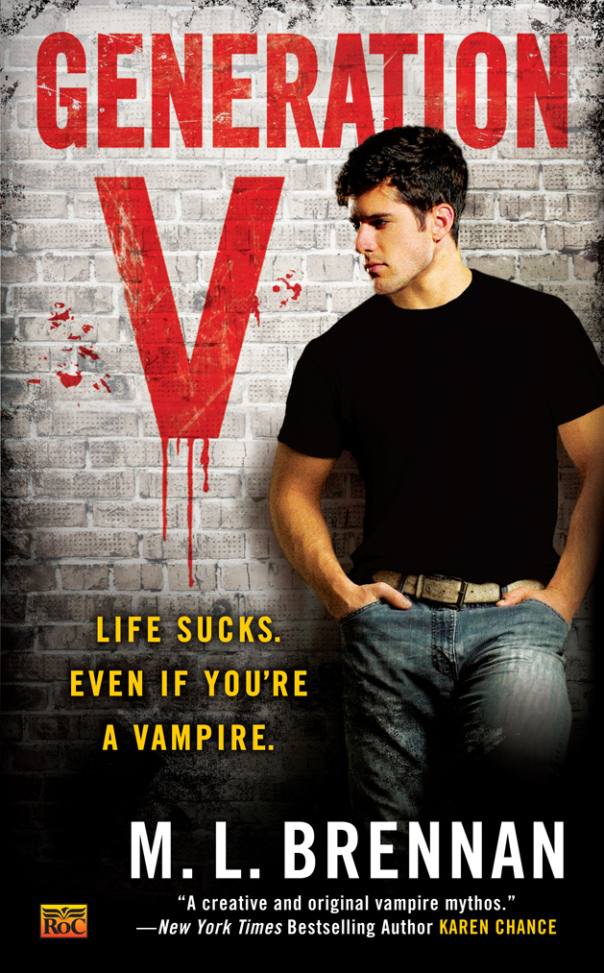 ML: Without a doubt, it’s Suzume. I have a lot of affection for many of my characters, but any scene that has Suzume in it is going to write just a bit easier, and have a lot of possibilities for snarky lines and outright fun. At the same time, she’s also a character who is less likely to get sleeping dogs lie, and sometimes just come out and talk about elephants in the corner. I always love writing a Suze scene, and I always start a book with a stack of notes about ideas I’ve had about things that Suze can say, or pranks that she can pull.

The most difficult character in Tainted Blood ended up being pretty much every werebear that showed up, particularly Dahlia and Gil Kivela. It took me a very long time to figure out exactly how I wanted them to come across, and then how to accomplish that. Their cousin, Carmen, was actually a little easier. But those scenes were very headache-inducing.

TWITA: How did you come up with the character of Suze, because if she were to exist we would want to meet her. Also, we have debated and hope you can decide: how is her name and nickname pronounced?

ML: In a lot of ways, Suze was built to be the complete opposite of Fort as he was at the beginning of the series. She has ego and self-confidence to spare, and is incredibly physically competent. If you were in a fight, you’d want Suze in there with you. She also enjoys herself – she’s fun and a prankster, which was really needed in that first book, since Fort was a bit on the emo side. But at the same time, Suze has a selfishness, and a bit of a moral gap when it came to empathy for those outside her family unit. So as much as she was an immediate favorite of a lot of people (including me!), she was a character who needed Fort in as many ways as he needed her, and they’ve really changed each other. One of my main goals in Generation V was for these characters to become friends, and to really recognize that here was someone who was different, but who made them a better person, and who they actually liked being around.

Pronunciation – I have a link! http://www.forvo.com/word/suzume/

TWITA: What are your future plans for the series? Is this an open ended series or do you have the overall story arc/ending in sight? Please note that we do not want it to end, we love it.

ML: I have all the major events plotted out to a sixth book, but if there turned out to be interest, there could be a lot more. a lot of things are being brought to a boil in Tainted Blood, and the payoff for those elements could last a pretty long time. There were actually a couple of big plot points that I had originally expected to address in Tainted Blood, and I ended up holding them back for the next book, so these things seem to be increasing as I go!

TWITA: Do you have any other series or stories that you are working on?  If so, would you give us a hint?

ML: Right now I’m writing the fourth book in the series, so I’m still really in this world. After this one is delivered, though, I think I’ll want to do something a little different – as a hint, though, it might still involve foxes.

TWITA: What genre do you enjoy reading?  Who are your “go-to” authors?

ML: I’m pretty wide-ranging. I love fantasy and sci-fi, plus non-fiction and history, plus essays, short stories, and literary fiction. Basically, I just bounce from one thing to the next, going by what looks the most appealing in my to-read pile. I love using Goodreads because it’s fun to look back at what I’ve read in a year, and see just how psychedelic that list looks.

Go-to authors – my wallet can tell you, there are a ton. But off the top of my head: Mary Roach, Isabelle Allende, Sharon Shinn, Brandon Sanderson, Max Gladstone, Diana Rowland, Anne Fadiman, and Will McIntosh.

I think that everyone should read Isabelle Allende’s Daughter of Fortune and Max Gladstone’s Three Parts Dead. Like, right now. I’ll wait.

TWITA: ML, it was wonderful to have you stop by during such a busy time. Thank you!

ML: Thanks so much for having me! It was a lot of fun, and thanks for the fabulous questions!