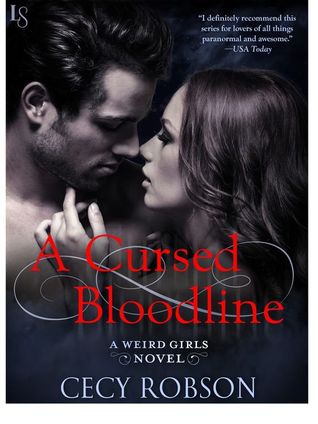 After the conclusion of Cursed by Destiny, Gikany and Una were on pins and needles awaiting A Cursed Bloodline to find out how Celia would overcome the cliffhanger threat left by Anara. Though the first two chapters were a bit sluggish, once it takes off, you better hold on to your socks! But one word of advice, keep the tissues handy.

Anara’s threat from the previous book almost destroys Celia. At the start of A Curse Bloodline, Celia was a shadow of herself.  Gikany and Una didn’t like how withdrawn Celia was, especially with her family. We understood the threat and we understood her deep-seated drive to protect her loved ones, but Celia wallowed in self-pity so long, we were yelling at her to “Buck up little camper and go kick some butt!”  We were surprised that her inner tigress didn’t try to lash out or urge her to seek assistance from Misha.  This is not to downplay the absolutely awful situation she was in.  She had hit rock bottom and her pain was palpable.  But Celia never stays down; she finds a way to fight and doesn’t give up.  Though it was difficult to read, all was not lost and after the first couple chapters, the stubborn side of Celia came back to fight.  From this point, it was a nail biting, page gripping, suspenseful, and pathos-filled ride.

This book had a different feel from the previous books and novellas.  The series has always been a mix of dark themes and lighthearted humor, occasionally leaning toward the happier side.  This book is much darker, more emotionally charged, and we experience tragedy.  Gikany and Una are still trying to come to terms with the loss of a minor character who had played a large part in the series.  Maybe it couldn’t have ended any other way, but it was still painful and we think this lovable character will be greatly missed.  Perhaps the ramifications will be found in the next novel.

However, rest assured, it is not all heartbreak and trauma.  There are some wonderful moments, healing moments, and hopeful moments.  These good surprises help to keep the book from becoming too dark.  We continue to love Misha and feel for this good guy who always finishes last.  We hope to watch him find a HEA of his own.  Maybe there will be a spin-off featuring Misha finding his mate.  Celia’s sisters continue to add vitality and humor to the series.  Their family dynamic continues to enhance the series.  We wonder about what will happen to Emme.  We think we have witnessed some serious foreshadowing about her love interest, but we aren’t entirely sure.  Tye, the lion shifter, really grew on us in this novel.  We liked how he flirts lightheartedly with Celia and we can see him being a good friend to the Wird girls.

This continues to be a fun and fascinating series.  Though this novel was darker with a bit of a slow start, it ends with some strong threads of hope.  However, if the prophecy is never wrong, then something good is coming, but we are sure Celia and Aric will have to triumph over something awful first.  We look forward to the next Weird Girls novel, A Curse Unbroken, coming out March of 2015.

Since being cursed with unique abilities, Celia Wird and her three sisters have fought the most bloodthirsty preternaturals in the Lake Tahoe region. But Celia’s greatest threat is someone she would have never suspected: Anara, a werewolf Elder who has allowed his hatred for Celia to spiral out of control. In a play for dominance, Anara tortures Celia and gives her an ultimatum: sever her mate bond with pureblood were Aric—or Anara will kill everyone she loves.

From the instant they met, Celia and Aric have shared an attraction that cannot be tamed. So keeping Aric away is impossible, and Aric would sooner die than allow anyone to hurt the woman he loves. Misha, master vampire and Celia’s sworn protector, also finds his way into the chaos, seeking blood from those who have harmed her.

Now Celia and her sisters are caught in the middle of a war driven by lust, fueled by hatred, and destined to end in tragedy. For Anara is a force to be reckoned with, and he will not succumb without robbing Celia of those who hold her heart.