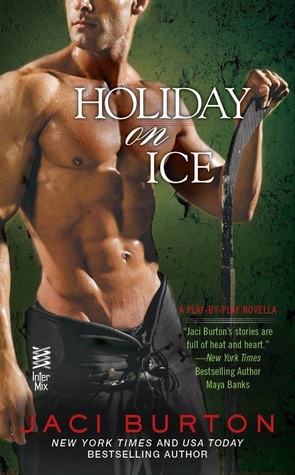 Holiday on Ice is a little Christmas gift from Burton to her readers.  It’s the kind of little novella that you can pick up and finish during the holiday chaos when you just need a moment to yourself.  It’s a bit of Christmas spirit, a little winter fun, and a lot of steamy, um… recreation.

Patrick “Trick” Niemeyer is on the New York Traveler’s professional hockey team with Drew Hogan of Burton’s earlier novel Melting the Ice. He has some recent history with Stella Slovinski who has just landed one of the dance leads in a new Broadway musical that will open in the spring.  Burton does a good job of getting us to accept the depth of their relationship quickly because of their shared past. We move through the Christmas season as the couple reunites, overcomes misunderstanding, and finds their happily ever after.

Unfortunately Holiday on Ice suffers from the same predictability that its predecessors did.  Burton has been here before.  Once again we have a woman who has been badly burned in a previous relationship.  At the first hint something is not all bliss in the relationship, she goes jumping to conclusions or isolates herself against any relationship at all until our hero shows how great a guy he really is, and deserving of her trust, to win her back in the end.  Burton just did this in Hope Burns, book three of the Hope Series and in Melting the Ice.  Nevertheless Burton’s regular readers will not be disappointed.

Superstar hockey player Patrick “Trick” Niemeyer and dancer Stella Slovinski have picked up where they left off a year ago, resuming their hot, uncomplicated affair. Stella refuses to call it dating, or a relationship. But lately, Trick is looking for more…

Stella’s been burned before—in a relationship she never talks about—not with her family, not with her friends, and definitely not with Trick. But now it’s the holiday season and Trick is determined to give Stella his heart wrapped up in a bow. He knows Stella is the right woman for him, but he’ll have to melt the ice surrounding her heart to keep her from walking away.