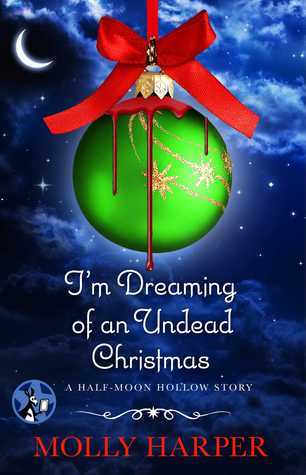 I’m Dreaming of an Undead Christmas is a lovely holiday novella set in the Half-Moon Hollow series. The story is told from the first person POV of Gigi, sister to Iris, the main character of the first full-length book, The Care and Feeding of Stray Vampires. Gigi is home on holiday break from the University of Kentucky, and it is first time seeing her big sister since Iris became a vampire.

Fans of Ms. Harper’s Half-Moon Hollow series will enjoy this story, and while it can be read as a stand alone, I feel that there are too many side characters with detailed histories for someone new to the series to complete enjoy the novella. I felt that if I hadn’t have read the first book in the series, I would have been lost. With that said, those who read the series need to pick up this story because actions that take place are sure to have a major impact on the next book.

I enjoyed seeing what’s become of Gigi, Iris, Cal, and the others since the conclusion of Stray Vampires, and this novella serves as a lovely “catch up.” However, it reads more like a prequel to the upcoming full-length novel, The Dangers of Dating a Rebound Vampire than its own story. Gigi is coming into a transitional point in her life. She’s finishing up college, looking for a job, deciding if her high school sweetheart is the one for her… She’s making some big decisions that will undoubtedly have repercussions on her life and possibly her well-being. While the decisions are made during this novella, their impacts are yet to be discovered.

The novella has many of the traits that I adore in Ms. Harper’s writing: charming setting, crazy characters, and a sense of humor that has me laughing out loud. However, it bothered me that after everything Gigi and Iris have experienced, Gigi was so casual about a potential deadly threat. I was also frustrated that the story itself was left completely open ended.

College co-ed Gigi is headed home to Half-Moon Hollow for her first Christmas since her sister, Iris, was turned into a vampire by her beloved undead husband, Cal. Iris is working overtime to make this holiday as normal and special as possible. After all, it’s taken her months of working with Jane Jameson and the Hollow’s vampires to convince herself that she won’t bite her baby sister on sight.

Gigi has her own worries. She’s falling out of love with her high school sweetheart, Ben, and has no idea how to tell him. She’s got a secret job interview with terrifying teen Council official, Ophelia Lambert. And there’s a handsome but cagey vampire following her around town and then disappearing before Gigi can confirm that he’s not, in fact, a figment of her fertile imagination. Holidays with family are complicated. Christmas with an undead family can be downright dangerous.

Reviews in the Series:
A Witch’s Handbook of Kisses and Curses by Molly Harper (Half-Moon Hollow #2)

7 responses to “Review: I’m Dreaming of an Undead Christmas by Molly Harper”