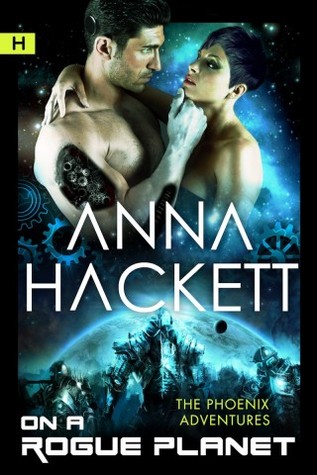 On a Rogue Planet is the third exciting adventure following the treasure-hunting Phoenix brothers and their cousins. The prior two stories shared how two of the three brothers found happiness and love while saving the galaxy. For the third time out into space, Ms. Hackett shares the story of Phoenix cousin Malin Phoenix. Loving her life as a salvage mechanic, she’s always felt lacking in the girly-girly department and unlucky in love.

While on the cyborg planet of Centax, Malin gets caught up in a violent coup and helps the head of Centax Security (military), Xander Saros, escape the uprising. She and her cousins are hired to help locate and retrieve an ancient Terran artifact that will allow Xander to restore order to his home world. What follows is a whirlwind of crazy action and intense emotional breakthroughs.

On a Rogue Planet is full of intense action, starting right from the get go. The classic sci-fi setting coupled with the non-stop excitement reminded me of something I’d see on Star Trek (which is a good thing). I enjoyed the multitude of humanoid beings that filled the pages, especially that the good guys aren’t always human.

Xander was identified for military action at a very early age. With the number of implants in his body, his emotions are dampened to such a point that he comes across as cold, hard, and scary. However, during the uprising, he was attacked and his emotional filters and dampeners were damaged. For the first time he experiences anger, lust, and more. I like how Xander’s ability to experience emotions springs to life because of Mal and that it’s not just desire he feels, but also jealousy, possession, rage, joy, etc. His emotional growth is fulfilling, especially since it leads to finding love with Mal.

Although Mal is secure with herself, she is not always comfortable in her own skin. She has been hurt too many times in her past and won’t allow herself to fall for an emotionless cyborg who’s primary duty is to his planet. Telling herself that she’s just helping Xander experience some of the more pleasurable aspects of life, Mal assumes he too will leave. This makes her journey to love satisfying as she opens up to him, even knowing he will leave her.

Together the couple is smokin’ hot. WOW! Their sex scenes are passionate and Xander’s struggle with feelings of possessiveness made my heart race a bit. I really liked the pair together, which made me wonder why I didn’t feel a strong connection to the couple. Unfortunately, I think it was that the story had too many close calls and the action scenes started to overwhelm me. I found that towards the end, I just wanted the pair to get the artifact and move on.

One other thing that took me out of the story for a short while was the introduction of three additional Phoenix cousins. Instead of being excited by the new settings and more characters, I fell like I was being set up for subsequent books. Like when you are completely into a TV show and the story pauses so the developer can introduce characters who will become a spinoff show. It disrupts the flow of the current story, and I found I was annoyed rather than interested.

Overall, On a Rogue Planet is a fun adventure with plenty of action and some pretty hot scenes. While I didn’t feel a huge connection to the pair, I did like them together and enjoyed watching them develop and mature throughout the book. The ending, while predictable, was emotionally satisfying. I’d recommend this enjoyable read to fans of sci-fi and adventure.

Unlucky-in-love salvage mechanic, Malin Phoenix, didn’t intend to get caught up in a coup and kidnapped by a sexy cyborg. But she finds herself swept into an adventure to help the deadly, emotionless CenSec, Xander Saros, retrieve an ancient Terran artifact and save his planet.

Soon she’s racing across uncharted space and is magnetically drawn to the cyborg whose strong arms and muscled body ignite a desire that burns brighter than a supernova. But Mal can never let herself forget that she can’t fall in love with a cyborg who can never love her back.

The crowning glory of the Centax Security program, Xander is heavily enhanced, his emotions dampened to nothing to allow him to be the most efficient, lethal killer in the galaxy. As he and Malin hunt for the remnant of the galaxy’s first computer, the Antikythera Mechanism, their quest leads them into the lair of a dangerous technomancer. But Xander can’t identify his greatest threat—the enemy or the fascinating woman who’s making him feel.

Purchase Info:
On a Rogue Planet (The Phoenix Adventures #3)

5 responses to “Review: On a Rogue Planet by Anna Hackett”