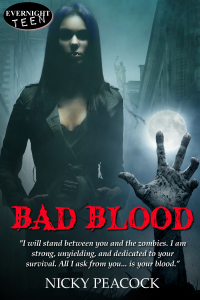 We ran to the hospital. On the way, we encountered hardly anyone, alive or dead. Where were they all? When we arrived at the hospital car park, I understood. Zombies were pack animals. A massive crowd of them were crammed in and around the main building like they were waiting for a concert to start, all barely paying attention to their surroundings and seemingly swaying against the force of gravity. The other thing was the smell. When watching horror films filled with shuffling zombies, the horror came from their ghastly looks—the reminder that death has a tight grip on us all, well, most of us. But what the filmmakers should focus on—if they could—was the acidic rank odor zombies gave off. They had been dead barely twenty-four hours. It took a normal human body at least thirty-six hours to really start to smell, and that was with a vampire’s heightened senses. These guys smelled like they’d been out in the sun for three weeks covered in rubbish and besieged by wily maggots. They were mostly intact, though. Maybe this hospital had been Zombie Ground Zero. Most had turned so quickly their comrades hadn’t had time to feed.

“Maybe we should try a less populated target.” Nicholas twitched his nose and turned away from me to dry retch.

“Maybe you should grow a pair.”

“Maybe you should act like a lady.” He now had his hands on his hips, squaring up for yet another argument.

“Acting like a lady isn’t going to help now, is it? What do you want me to do? Drop my handkerchief in front of the zombies and watch them fight one another to scoop it up for me? Moron!”

“Always to the ‘nth degree with you, isn’t it?”

“Shut up. Look, the doors are holding, and they’re outside, not inside, which means there must be some people left in there alive to have barricaded this place so tight.”

“Or maybe there are just more zombies in there.”

“Well, there’s definitely a blood bank in there, and that’ll help matters no end!”

Nicholas looked thoughtful then nodded. He of course didn’t want to actually say aloud that I’d had a good idea. “So, how do we get past them?”

I assumed it was a rhetorical question, so I started down to the car park entrance, where most of the zombies were mobbing. I opened the outer door as quietly as possible.

“I thought we’d agreed I wasn’t a lady.” And with that, I shoved him as hard as I could into the throbbing throng of zombies.