Today we have a special Sunday Snippet of the upcoming, soon-to-be-released title, The Good Chase by Hanna Martine. As a special sneak peek extra, Ms. Martine is giving away one (1) Advance Review Copy (ARC) of her book!! Details for the giveaway are at the end of the post. 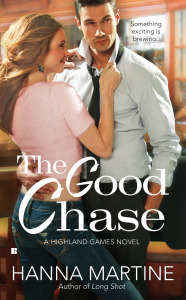 Swirling the mug, Byrne said, “I think, if I had to choose, I’d pick bourbon over Scotch.”

She pressed her elbows to the table. Her gaze turned inward. Dreamy, he’d dared to say. Her lips curved slightly upward. “I love bourbon, too.” Then she gave a little shake of her head. “My granddad didn’t, though, and he was the one who taught me all about whisky with just a y. Scotch whisky.” When he gave her a quizzical look, she added, “All other whiskey is spelled with an e-y at the end, except for Canadian whisky, which is just the y.”

“He claimed the e-y stuff wasn’t rooted well enough, wasn’t historical, and I get where he’s coming from, but I don’t necessarily agree. I love it all for different reasons.”

“Historical?” He shifted on the bench, trying to scoot closer and cursing the table between them. “Explain.”

She gestured to his mug. “Okay, give it a nose.”

He did, using the three-step process he’d found on the Internet, which seemed to have impressed her.

“Smell that? Close your eyes.”

“Picture yourself standing in a green valley, where the rain is little more than a fine mist bringing out the scent of the grass. And as you’re walking along there’s an old stone wall that’s been there for centuries, and clumps of purple heather. It’s so quiet you can hear sheep and cows in the distance, but you can’t see them. If you’re near the coast, you can smell the salt in the air when the wind turns the right way. Along an old road there’s a pub with a thatched roof, and when you go inside, the place smells of peat fire and the polish they used on the wood bar just that morning. Everyone speaks in such a lovely accent, and as you sip their favorite whisky, you can taste their stories.”

Entranced. There really was no other word to describe what he felt at that moment. Byrne didn’t want her to stop describing things, but she did. And when he opened his eyes, the look on her face told him she spoke from memory. It made him want her more, and he didn’t think that was even possible.

She lifted her mug in a toast. “Now let’s drink.”

Though he raised the mug to his lips, he didn’t take a sip. Instead, he watched her drink. The moment her mug went back, her eyes fluttered closed. She worked the whisky in her mouth, at the back of her jaw, chewing it, like the random guy on the Internet video had once instructed him. There was elegance to the way she did it, however. Elegance and . . . sensuality. She looked nearly orgasmic.

Her throat worked, the whisky sliding down, and then she opened her eyes. She glanced at his still-full cup. “You didn’t drink.”

“Sorry.” Act casual. “Was watching you to make sure I was doing it right.”

She silently set her mug on the table. Licked her lips. “You do it right.” Then she hastily added, “I saw you, remember? Last week.”

Was it only last week? It seemed like they’d been doing this dance forever.

In the silence, in the stillness, just the flames behind her moved. Only the logs made sound as they popped and sizzled, and then came muffled giggles from the next campsite as a dad tried to wrangle his toddlers back into their tent.

“You did skip out before I got to the tasting part,” she said. “Want me to give you the VIP tour?”

He grinned. “But then I’ll miss my mouth.”

Holding her gaze, he slowly pressed the mug to his mouth and closed his eyes. Feeling a little like Luke with the blast shield down, he trusted in his Obi-Wan, and tipped back his head, letting the whisky roll past his lips and settle in the back of his throat.

“There,” she breathed. “Do you taste the sun on the fields of barley? The water from the lochs? The smoke from the ancient peat bogs? The people’s pride? The history?”

He swallowed. This bottle was half-gone, having been drunk by himself and nameless others back in the city, and yet he’d never enjoyed it a quarter as much as he did just then.

When he opened his eyes, she’d leaned back a bit, questioning him with a squint.

All he thought was, if this was how she did tastings at the Amber, holy shit, no wonder that place was so popular and that she was such a hit.

“I left out the part about the dirty men who work in the distilleries,” she said. “And how rank the mash smells.”

“And I thank you for that.” But he still drank what was left in his mug, again tasting everything she’d just described.

She laughed and turned sideways, throwing one leg over the back of the picnic bench. A water bottle sat at the far end of the table, and she unscrewed the cap to take a sip.

He nodded at the bottle. “Don’t some people add water to whisky?”

“You can.” She sipped the water again. “It cuts the alcohol and brings out the flavor. Want to try?”

The easiest thing would have been to just reach across the six inches and take the water bottle, but Byrne’s life had never been easy, so why start now?

He stood up and she eyed him questioningly. But he wasn’t leaving. No way. Not yet. Instead he walked around the table, to her side. He straddled the bench, facing her. The fire’s heat coated the right side of his body. She sat so still that for a moment he thought that time might’ve stopped. Maybe he wanted it to.

Taking the whisky bottle, he tipped a bit more into his mug. Shea was still holding the water bottle, and he asked for it with a lift of his eyebrows and a point of his finger. She answered with a nod but didn’t make a move to give it to him, so he reached for it. Slid his hand over hers. With the tiniest of gasps, she released the bottle.

The first touch is always the best, and he let it sink in, let himself memorize how it felt.

“Just a few drops,” she said, after clearing her throat.

“Gotcha.” He did as the expert instructed. “Is that enough?”

“Sure.” Though she hadn’t looked away from his face.

Under the pretense of getting more comfortable on the hard wood bench, he inched closer to her. “Do you add water to your whisky?”

She licked her lips. My God.

Though he clutched the blue-and-white mug in his hand, it seemed nonexistent. Completely unimportant. The only thing he saw was Shea.

“Aren’t you going to taste it?” she whispered.

He was already leaning in. “Absolutely.”

And then her mouth belonged to him, her sweet whisky lips impossibly perfect.

Ms. Martine is generously giving away one (1) ARC of The Good Chase to give to one (1) lucky commenter. To enter, please leave a comment at the end of this post telling Hanna what is your favorite adult beverage. The giveaway is open until 12:00 midnight EST on Thursday November 20, 2014. Winner chosen at random from all eligible entries. This contest is open to U.S. mailing addresses ONLY and where not prohibited by law. Open to participants, 18 years or older, who are legally allowed to participate in such a contest as allowed by their local laws. All federal, state, local, and municipal laws and regulations apply. Void where prohibited. No purchase necessary. By participating in the contest, participants agree to be bound by the decisions of the contest sponsor. Prize will be delivered by the author. This blog, its reviewers, and the owner are not responsible for items lost in the mail. By entering this giveaway, participants agree to abide by these terms.