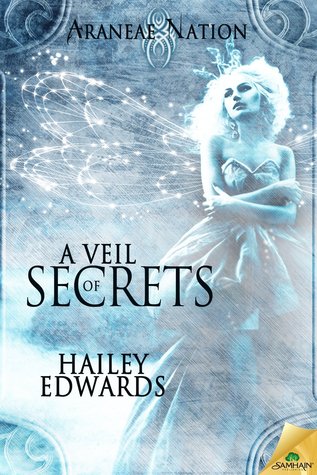 Hailey Edwards? Araneae Nation book? Yes, please! I have been WAITING for this book. And I’m so entirely glad with the results! Ms. Edwards has done a fabulous job!

Okay. Harbingers. If you’ve been reading this series, you know you love to hate most of them, right? Well, I have been WAITING for this story. Knew it had to be told. Knew I had to read it.

Here’s the thing about A Veil of Secrets. Besides learning about the Saltisideae clan, there’s a lot of stuff going on here. The veil, all the stuff with the dayflowers, and the sibling stuff… not to mention the stuff with Marne and Asher. We also get to see Pascale again, as well as Llew. Totally missed them, and was super glad to see them again!

Here’s what I really liked about Marne. She started out as this weak chic that was taken care of by her brother from the time she became a fledgling harbinger and was rescued from her maker. But, despite all the difficulties Marne faced, she grew stronger and fought for herself and the ones she loved. She knew what she was fighting for, and totally went for it.

Asher, however, started off as a pretty huge jerk. By the end, however, he was completely cool. And, rather awesome. The way he cared for Marne, even when she didn’t really want to care for herself, was awesome. The way he attempted to keep his feelings to himself was admirable. One of my favorite quotes from this book comes from Asher:

“Only to those who are averse to being amused by themselves.” He stretched his legs in front of him. “No one has a perfect life, no matter how flawless it may appear from the outside. None of us can ever know the grief another has suffered. I have been fortunate. I had good parents, a good home and a career path set before me. I have several friends who have not been as blessed. I don’t mean to lessen the circumstances that shaped you. I mean only to point out you have broken that small mold. Pay the past respect, but don’t allow those events to govern your future. You are not that person.”

So, while we get to see all the personal growth of Marne, I think the most important thing I took from A Veil of Secrets is that the past needs to remain in the past. To not let it poison your present and future. Personally, this book spoke to me in several ways (and of course, all of them are spoilerish). The big thing, however, is that no single thing gives me my identity. I am a compilation of all things in the past; how I let those things affect me is up to me. They can make me stronger, or I can languish in the past and let it control the future.

I, like Marne, am taking a page from Disney’s FROZEN. Let it go. Now. Seriously. I want to see Henri again. I want Pascale to get her HEA, as well as Llew… and with the tension between them? Wow. Fireworks waiting to happen.

Fresh from the battlefields of Erania, Marne rides south with Edan, headed for the city of Beltania. Among the Mimetidae guards accompanying them is Asher, who’s been a thorn in her side since the day they met. He’s rude and abrasive…yet he was the first to volunteer as escort.

Marne dreams of a fresh start where no one knows who—or what—she is. But first, they must cross the veil. Rumor has it spirits haunt that grim stretch of road, and unwary travelers who enter are never heard from again.

Veil or no veil, Asher is honor bound to see Marne safely to her new home. Though truth be told, Marne leaving Erania is the last thing he wants. This journey is his final chance to convince her distance will only make his heart grow fonder.

When Edan is lost to the mists, Marne is trapped in a strange land with no allies—with a man who draws her closer every day. Closer to her heart, and her secrets. Secrets she must reveal if they are to save the one man bent on tearing them apart.