Christmas has always been one of my favorite holidays. There’s so much anticipation and togetherness and—

“Carbs!” I groaned in pure pleasure as I swallowed the last bite of some lacey, fried Laufabrauð. “But you know, Iceland can’t hold a candle to America when it comes to Christmas bad-for-you-ness.”

Neil was on the couch, a mug of hot cider in his hand, feet propped on the overstuffed ottoman in our den. Only the fireplace, and the enormous tree that reached into the open second story above, lit the room. The golden-white lights nestled in the evergreen boughs easily overpowered the fire, because Neil had insisted the decorator keep piling the damn things on.

He looked up at me, sleepily blinking his half-mast eyelids. “If we’re going to have Christmas here, we get to have food from there.” It was a rule he’d made the year before, when I’d insisted we spend Christmas in our new home.

I sat beside him, sighing happily. “Our first Christmas as a married couple.”

“And our first Christmas as grandparents,” Neil added, tilting his head to bump against mine. “You’re getting these milestones out of the way in record time.”

Snuggling down into the soft leather couch and the crook of his arm, I closed my eyes. “You guys keep teasing me about the grandma thing, and I don’t care. That baby loves me, and you’re all just jealous.”

“What are you talking about? She only has eyes for her afi.” He took a sip from his mug. “Which is what she was saying, I’m afraid.”

We’d been arguing all night over whether or not Olivia had called Neil by the Icelandic word for grandpa, the way we’d all started referring to him during her visits, or if she’d said, “Sophie.” Secretly, I suspected she’d just been blowing bubbles. She was only seven months old, after all. But it was fun to tease him.

He scoffed. “Either way, we’re going to be in terrible trouble if she doesn’t say ‘mummy’ first.”

“I’m so proud of you,” I sighed. “No puppies under the tree, no pony in the stable.”

“We don’t have a stable,” he reminded me, a tad defensively.

“We were going to. Don’t lie. I saw the number for the contractor on the caller ID. I looked him up.”

He shifted position, just a little, and wouldn’t meet my eyes. “When Emma was little, I vowed that I wouldn’t spoil her.”

A huge, incredulous laugh tried to burst from my throat, but I subdued it into more of a choking noise.

“I know I’m not pulling the wool over your eyes. You’ve heard stories; you know I was a dismal failure. But now, with Olivia, I feel as though I can spoil her. I’m retired now, so I have the time. And I’m older and wiser. I recognize that if my behavior turns her into a horrible little beast, well, that horrible little beast isn’t my responsibility.” He smiled his half-smile I loved so much. “Besides, it isn’t as though I’ll have another chance at this.”

“Emma could always have another baby,” I pointed out. As far as I knew, she and Michael wanted a big family.

“It’s different, once there are siblings in the picture. That was one of the joys of having Emma. I could concentrate all of my affection on her.” He stopped himself to quickly add, “It isn’t that I won’t love Emma’s other children. But this is my first grandchild.”

“And you want her to be the star of the show for a while.” I could get that. As an only child, I understood how cool it was to have massive one-on-one time with your relatives. “There’s nothing wrong with that.”

“I’m starting to realize how life… it’s cliché to say it, but it really does go by quickly.”

“You’re telling me. I’m a grandma, and I’m not even thirty yet.” I slipped off my flats and put my feet up beside his.

“Do you know what would be really amusing?” He giggled. The fact that he giggles is like, number seven on my top ten things I find hopelessly cute about him. “If your mother and Tony were to have a baby. Then your sister would be younger than your granddaughter.”

“My sister would be younger than my granddaughter, I’m the same age as my step-daughter, my husband is older than my mother, and we’d all have to go on Maury.” I snorted. I was at that stage of tired where everything was funnier than it should have been. “But seriously, they had better not have any babies. I would be so disturbed.”

“What about an immaculate conception?” Neil set his mug aside. “They both believe in that, don’t they?”

“You’re just lucky mom hasn’t put a bathtub Mary out in front of the guesthouse.” I laid my head against his shoulder again, and he petted my hair absently, twining a lock around his index finger.

“This really was the most fantastic Christmas,” he murmured against the top of my head. He snuck one finger below my chin to tilt my face up. The soft white glow of the Christmas lights picked out the flecks of gold his green eyes. I was as hopelessly enthralled and overwhelmed by him now as the first time I’d ever seen him.

I smiled up at him. “And I’m looking forward to so many more.”

Neil leaned in, and his lips brushed mine, first a feather-soft touch, then a firmer kiss that grew into an urgent demand. I shifted position and rose on my knees beside him on the sofa. Breaking our mouths apart for just a moment, I grabbed the tie of my cranberry wrap dress and tugged it undone. He turned his body toward me, his hands snaking below the fabric as I wriggled out of it to kneel beside him in my ivory balconette bra and lace boy shorts.

“Is this the part of Christmas where you sit in my lap and I tell you what a very, very naughty girl you’ve been this year?” He slapped my ass and dug his fingers in for a squeeze.

It’s amazing how the promise of aggressive, filthy sex can reinvigorate you after an exhausting day.

I leaned over him, my hair falling around us in a dark cascade. “I guess that would be entirely up to you, Sir.”

“I know we said no presents this year,” he said with a mock sigh. “But I am going to give you something.”

I kissed him and smiled against his mouth. “And what’s that, Sir?”

He sank his fingers into the hair at my nape and tugged me down, hard, to whisper in my ear, “A very sore bum.”

His teeth found my earlobe. As his mouth slid down my jaw and his hand came up possessively around my throat, I moaned, “Well, merry Christmas to all, and to all, a good night.”

“Oh, Sophie,” he growled against my neck. “You have no idea how good it will be.”

You can meet Neil and Sophie in The Boss, a free ebook on Amazon, Smashwords, and Barnes and Noble. Their latest adventure, The Ex, is available now! 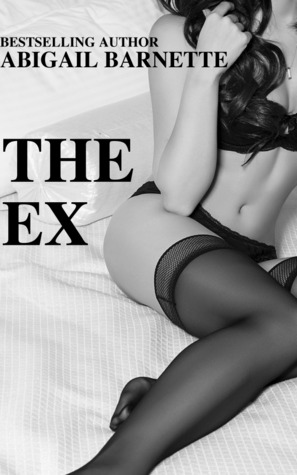 Magazine editor-in-chief, bride-to-be, and soon-to-be-step-grandmother at twenty-six, Sophie Scaife is looking forward to married life with her fiancé and Dom, wickedly sadistic billionaire Neil Elwood. As they enter unexplored sensual territory, Neil leads Sophie to the very edge between pain and pleasure—and she discovers a surprising new side to her sexuality.

While Sophie balances her hectic work routine with her devotion to her unconventional family, Neil has to adjust to life as a retired mogul. With their big day drawing nearer, they have to forge through pre-wedding jitters, personal crises, and an unexpected houseguest to get to their kinky ever after.

But a decades old trauma still haunts Neil. When the private details draw public interest, Sophie learns that the scars of his past are greater than he let on—and he’ll need all of her love to heal them…

She is a proud Michigander, mother of two, and wife to the only person capable of spending extended periods of time with her without wanting to murder her.

Now, head over the THE BOOK NYMPHO to see today’s feature with Kate Allure.