“What the hell is Christmas?”

Dr. Eos Rai-Phoenix looked up from the ancient relic of a bronze sculpture she was cleaning and shot her husband an exasperated look. “It’s an ancient old Earth custom, Dathan.” She shook her head. “You’re the most famous treasure hunter in the galaxy, how come you don’t know this?”

“I hunt treasure, babe. I leave the astro-archeology to you and my big brother. I like the shiny stuff, you know, the stuff I can sell for a lot of e-creds.” He leaned against the wall and gave a mock grimace. “Although for some reason, I seem to donate a lot of it to museums these days.”

Eos smiled. Goddess, he was a handsome rogue with his blue eyes and dark hair, and he was all hers. Since he’d exploded into her life, every day was a grand adventure. And she knew he loved her…enough to stop selling so many pieces of history off to private dealers.

“So, you’re planning to resurrect some Terran custom and make us celebrate it?” His tone made it sound like she wanted him to jump out an airlock in the middle of a solar flare.

“Yes. From the records I’ve been studying, Christmas originally started out as some sort of religious festival, but over time it morphed into a more commercial holiday. Still, it was centered around family. They gave each other gifts, ate too much food together—” she broke off when she saw his indulgent grin. Okay, so she was prone of rattling off interesting historical facts. “Now that we have Lala here…I wanted to do something special. She’s only fifteen and she’s never had a family.” 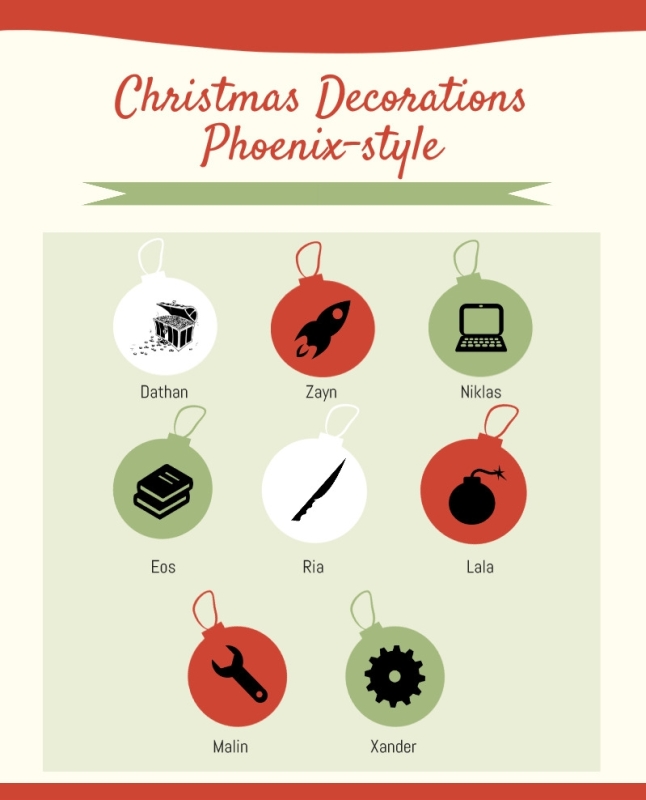 Dathan raised a brow. “She’s a teenaged explosives expert who likes to blow things up. Half the galaxy’s terrified of her.”

Eos dusted off her hands. “She’s still a child. We’re celebrating Christmas, we’ll all get each other gifts, Lala’s going to cook—”

“Stars help us all,” Dathan muttered.

Eos hid a wince. The girl was a terrible cook, and some of her dishes were known to be poisonous, but she meant well. “And we’re going to decorate that.” Eos pointed.

Her husband’s cobalt blue eyes went wide. “Where the hell did you get that?”

The tree stood taller than Eos, probably level with Dathan at a few inches over six foot.

Dathan glanced out the open hangar doors. Beyond it was the purple shimmer of the huma-dome that generated the atmosphere over the headquarters of the Phoenix treasure hunting and salvage business. Beyond that was the gray, pock-marked surface of the captured-asteroid-turned-moon they called home. There wasn’t a tree in sight.

“I got it on Souk.” For the right price, you could get anything on the market planet their moon orbited.

“Why are we going to decorate it?”

“Because that’s what they did on Earth at Christmas.”

Eos shifted. “I don’t know. I haven’t found any explanation for the custom.” She shot him a narrow stare. “But every Phoenix is this building will be making a decoration to hang on it. Something that reflects the things you love.”

Dathan snaked an arm around her. “Then I should just hang you on a string.”

She melted against him. “I’m sure you can use the goods printer to make something creative.”

“Well, I know Niklas will probably make a mini-computer. The guy’s always glued to his.”

That was true. Her astro-archeologist brother-in-law was always researching something. When he wasn’t brooding over a certain rival treasure hunter that often tried to kill him. Not that Eos could cast stones about the research…she was usually doing the same thing. Only she preferred studying ancient books. “And Zayn’s will be a starship.” The youngest Phoenix brother was an ex-Strike wing pilot and lived to fly. Well, his wife probably ranked a little higher than flying now.

“Ria’s will be sharp and pointy. Still can’t believe my brother married an assassin.” Dathan paused, a strange look crossing his face. “I dread to think what Lala will come up with.”

Yes, well, Eos was a little concerned as well. She had to tell the teenager that nothing with actual explosive in it could go on the tree. “And Malin and Xander are flying in from Centax. I’ve already told them to make their favorite decorations.”

Dathan groaned. “We’re going to have the galaxy’s deadliest killer cyborg at our table again?”

“Because Mal will have told him to be. He may be part machine, but the damned cyborg is crazy in love with my cousin. He’ll probably make a Malin-shaped decoration for the tree.”

Or one of the implant enhancements his planet revered. “And Malin’s will be a multi-tool.” The salvage mechanic always had her beloved multi-tool on her. Eos grinned. The Phoenix gang was a unique and varied bunch. She was so glad they were hers.

Dathan let out a gusty sigh. “Okay, I’ll make a decoration. It’ll probably be treasure, and very shiny.” He tugged Eos closer. “But my greatest treasure is right here in my arms. I love you, Eos.”

She pressed her lips to his. “I love you, too. Happy Christmas, Dathan.” 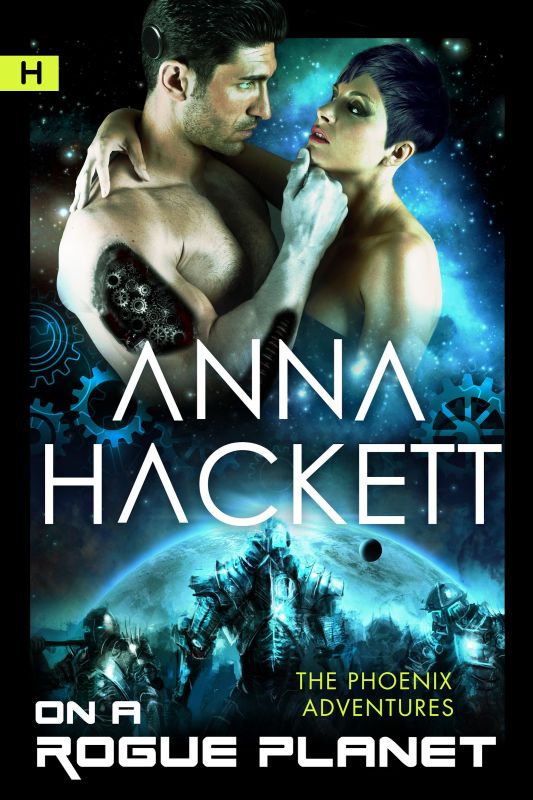 Unlucky-in-love salvage mechanic, Malin Phoenix, didn’t intend to get caught up in a coup and kidnapped by a sexy cyborg. But she finds herself swept into an adventure to help the deadly, emotionless CenSec, Xander Saros, retrieve an ancient Terran artifact and save his planet.

Soon she’s racing across uncharted space and is magnetically drawn to the cyborg whose strong arms and muscled body ignite a desire that burns brighter than a supernova. But Mal can never let herself forget that she can’t fall in love with a cyborg who can never love her back.

The crowning glory of the Centax Security program, Xander is heavily enhanced, his emotions dampened to nothing to allow him to be the most efficient, lethal killer in the galaxy. As he and Malin hunt for the remnant of the galaxy’s first computer, the Antikythera Mechanism, their quest leads them into the lair of a dangerous technomancer. But Xander can’t identify his greatest threat—the enemy or the fascinating woman who’s making him feel.

To learn more about the book and The Phoenix Adventures, visit: http://annahackettbooks.com/books/the-phoenix-adventures

Anna is generously donating a $25 [US] gift card and digital copies of the first two books in her Phoenix Adventures: one of At Star’s End and one of In the Devil’s Nebula to give away to three (3) lucky commenters. To enter, please fill out the Rafflecopter form AND leave a comment letting Anna know what your Christmas tree decoration would be. The giveaway is open during the time specified on the Rafflecopter form. Winner(s) chosen at random from all eligible entries. This contest is open internationally, where not prohibited by law. Open to participants, 18 years or older, who are legally allowed to participate in such a contest as allowed by their local laws. All federal, state, local, and municipal laws and regulations apply. Void where prohibited. No purchase necessary. By participating in the contest, participants agree to be bound by the decisions of the contest sponsor. Prize will be delivered by the author. This blog, its reviewers, and the owner are not responsible for items lost in the mail. By entering this giveaway, participants agree to abide by these terms.

Now, head over the THE BOOK NYMPHO to see today’s feature with Jessica Scott.