Today Carrie Ann is sharing an excerpt from Delicate Ink

Sierra Elder threw her handbag on the counter and stomped her heels on the tile. The nerve of that man. The freaking nerve.

Seriously? That bearded mountain of a man thought he had the right to judge her? What right did he have to sneer at her and look down on her with those gorgeous blue eyes, and make her feel like she didn’t belong in his shop?

What the hell was wrong with her? He’d judged her and found her wanting, and yet she thought he had pretty eyes?

She was twenty-nine for freak’s sake. Not a teenager. Pretty eyes shouldn’t matter. But they were gorgeous.

Apparently, she needed to eat since she was clearly lightheaded and not thinking straight. That man had thrown her off her game, and she wasn’t in the mood to deal with him. It had taken all her courage to walk across the street and into the black and hot pink shop.

She’d lived with the consequences of her actions, of Jason’s actions, for ten years, and in some respects, it hadn’t been long enough. Not enough time to wash away the taint, the nightmares.

She couldn’t think about that. Not now. Maybe not ever.

That Montgomery, Austin, according to her friend Hailey, had pushed her back, and now she knew she needed to buck up and figure out her next step. If she was honest with herself, she would say that she’d just been looking for an excuse to run away from her plans of ink and recovery, but she didn’t want to be honest with herself. She wanted to blame Austin of the gorgeous blue eyes for her problems and fear. If only for a moment. It was the coward’s way out, but she’d take it for the afternoon.

Then she’d find a way to walk back in and talk to the sweet apprentice, Callie, about finally getting her tattoo. Until then, she’d think of interesting ways to beat the crap out of Austin since she was too small to actually do it herself. Plus, violence wasn’t always the answer. Not always.

Great. Now she didn’t know what to think, but she was still hungry. She looked around at the almost finished shop she loved and shook her head. She was too angry, confused, and hungry to deal with the little details that remained until her opening in a few days. What she needed was a sandwich, fresh iced tea, and the smile of her new friend, Hailey.

Luckily, Taboo, Hailey’s café, sat right across the street from her own boutique, Eden. That also meant that Taboo was right next to Montgomery Ink, but that couldn’t be avoided. Sierra thought the café even had a side door right into the shop, which must be nice for the artists. Lucky bastards.

Nope. She wasn’t going to think about him anymore. Not even her rabid curiosity about just how much ink he wore and where it led would move her from her position. She did not want Austin Montgomery, and she did not want anything having to do with his tattoos, thank you very much.

It wasn’t just the tattoo, however. Just his presence made her yearn for things she’d long since buried.

She picked up the purse she’d thrown on the counter and left her shop, locking it behind her. After a good meal and a pick-me-up conversation, she’d get back to it. There were numerous details left for her to handle, but she’d mapped out a whole afternoon off so she could talk with a tattoo artist.

Now it seemed that would all be for naught, but she wasn’t going to think about that. Not until she talked with Hailey and had a turkey and provolone club in her belly. She’d been so stressed for the last few months working on getting Eden ready, putting all her hopes and dreams into a store that could crash and burn on the streets of Denver, that she hadn’t been eating as much as she should. Luckily, Hailey took care of Sierra and made sure that she had food in her system, at least when she was downtown.

Sierra didn’t have the curves she’d always craved when she was younger. She might have filled out some from her all-limbs and flat-chested youth, but not much. She still had harsh angles and barely a handful of breasts, though Jason had never complained.

No, she wasn’t going to think about Jason.

Not twice in one day. There was only so much she could take without trying to find a drink before five at night. She had standards and rules after all.

She purposely kept her gaze from the front of Montgomery Ink. Their large windows made it easy to see in and watch the artists at work. She couldn’t trust herself not to find the one man she shouldn’t find in the first place, so she kept on walking. The man angered her, made her feel like she wasn’t wanted, and yet her damned libido still wanted him.

It was just her dry spell, and he happened to be an oasis in the desert.

“There you are,” Hailey called out from her place behind the counter. “I was about to call you and make you come over here for food. God knows you haven’t eaten yet.” Hailey smiled, her red-painted lips bold against her pale skin and white-blonde bob with blunt bangs. The other woman always reminded Sierra of a starlet of a forgotten era mixed with the undeniable energy and spunk of the current one.

Hailey also made kick-ass soup and sandwiches. The woman was a dream with coffee, despite the fact that during peak hours, when she didn’t have time to wait in line for better coffee, Sierra went to the other coffee shop that sat right beside Eden. She’d seen Austin meander in with those long legs of his to the place next door to Eden as well.

Not that Sierra watched him move.

She disliked him, she remembered. Disliked him and his attitude. 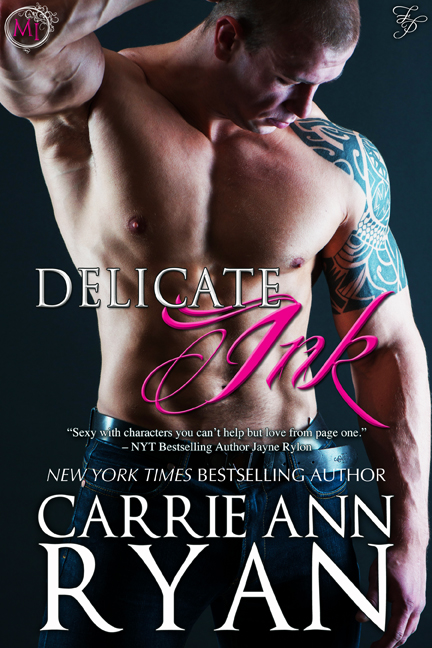 On the wrong side of thirty, Austin Montgomery is ready to settle down. Unfortunately, his inked sleeves and scruffy beard isn’t the suave business appearance some women crave. Only finding a woman who can deal with his job, as a tattoo artist and owner of Montgomery Ink, his seven meddling siblings, and his own gruff attitude won’t be easy.

Finding a man is the last thing on Sierra Elder’s mind. A recent transplant to Denver, her focus is on opening her own boutique. Wanting to cover up scars that run deeper than her flesh, she finds in Austin a man that truly gets to her–in more ways than one.

Although wary, they embark on a slow, tempestuous burn of a relationship. When blasts from both their pasts intrude on their present, however, it will take more than a promise of what could be to keep them together.

Carrie Ann is generously donating a special exclusive swag pack and a ecopy of a book from her backlist to one (1) lucky commenter. To enter, please fill out the Rafflecopter form AND leave a comment at the end of this post telling us about a tattoo you have or want to get (or saw on someone else and liked). The giveaway is open during the time specified on the Rafflecopter forms. Winner(s) chosen at random from all eligible entries. This contest is open internationally, where not prohibited by law. Open to participants, 18 years or older, who are legally allowed to participate in such a contest as allowed by their local laws. All federal, state, local, and municipal laws and regulations apply. Void where prohibited. No purchase necessary. By participating in the contest, participants agree to be bound by the decisions of the contest sponsor. Prize will be delivered by the author. This blog, its reviewers, and the owner are not responsible for items lost in the mail. By entering this giveaway, participants agree to abide by these terms.

Now, head over the THE BOOK NYMPHO to see today’s feature with Catherine Bybee.