Hi there! I’m Kitty Katt-Martini. I’m a former marketing manager turned superbeing exterminator, turned (somehow) ambassador, turned wife of the Vice President (against my and almost everyone else’s will). Along the way I’ve: discovered that aliens are real and the ones that live on Earth are gorgeous in the extreme; married one of them and had a wonderful child; discovered that there are more conspiracies to destroy or take over the Earth out there than you can shake a stick at, both internal and extremely external; and become Wolverine with Boobs and Dr. Doolittle at the same time. (Long stories. Really.)

For me and for everyone else, though, it’s hard to make resolutions and stick with them. Usually said resolutions get tossed to the sidewalk by the end of January.

So I have a plan. I’m going to set mine up so I literally cannot fail. Ergo, in the coming year I resolve to:

5. Kick bad guy butt anytime said bad guys show up around me and mine, which is pretty much all the time. I’ll make this one before the end of the first quarter of the year, guaranteed.

4. Never give in to authority when it’s wrong or just being supercilious and rude. Fight the power, baby, fight the power! You know, when appropriate.

2. Spend quality time with my daughter and family where we are not running for our lives, trying to escape the clutches of evil super-geniuses, or dealing with politicians. This is going to be the hardest one to achieve, but I didn’t say how much time, now, did I?

1. Have lots more sex with my alien hottie husband, Jeff Martini, in as many places and using as many positions as possible. 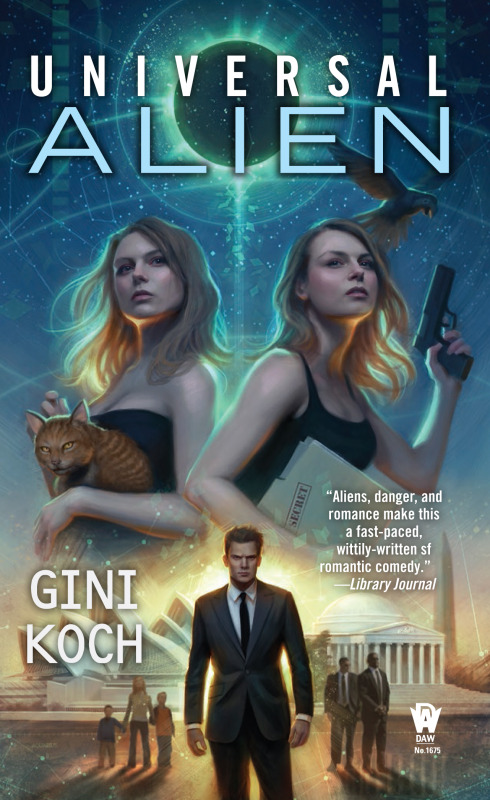 Being the wife of the Vice President isn’t easy. Especially when your talents lie in kicking butt and rocking out…

Jeff and Kitty Katt-Martini find out just how easy it is for the wife of the Vice President of the United States to unintentionally insult an ally. Now they have to smooth things over with the Australian Prime Minister, pronto, or risk creating an international incident the worldwide anti-alien coalitions will be able to use to force Jeff to resign and the A-Cs to leave the planet.

But before Kitty can make things worse, a cosmic congruence and a little help from some powerful beings shoves her into another world — one where she’s been married to Charles Reynolds for years and aliens don’t exist. She’s also landed in the middle of a huge conspiracy and is marked for death…but at least that’s business as usual.

Kitty’s not the only one confused, because the Kitty from that world has taken her place in this one. Now Alpha Team and the Diplomatic Corps have to make sure that no one spots that there’s been a switch, while keeping World War III from happening. And they have to do so while keeping this new Kitty in line, because she has views about what to do and how to it, and time is running out.

Can both Kittys save their respective days before it’s too late to go home to the universes they belong to? Or will one Kitty decide to keep the other’s life…forever? 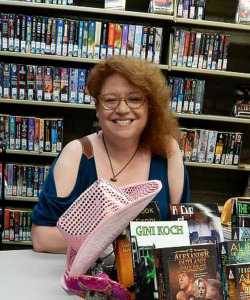 As G.J. Koch she writes the Alexander Outland series and she’s made the most of multiple personality disorder by writing under a variety of other pen names as well, including Anita Ensal, Jemma Chase, A.E. Stanton, and J.C. Koch.

Currently, Gini has stories featured in the Unidentified Funny Objects 3, Clockwork Universe: Steampunk vs. Aliens, and Two Hundred and Twenty-One Baker Streets anthologies, and, writing as J.C. Koch, in Kaiju Rising: Age of Monsters, The Madness of Cthulhu, Vol. 1, and A Darke Phantastique anthologies. She will also have a story in the first book in an X-Files anthology series coming out in 2015. Gini can be reached via her website: www.ginikoch.com

Gini is offering one (1) winner the choice of one of any of the first 9 books in the Alien/Katherine “Kitty” Katt Series (Touched by an Alien, Alien Tango, Alien in the Family, Alien Proliferation, Alien Diplomacy, Alien vs. Alien, Alien in the House, Alien Research, or Alien Collective), signed and personalized. To enter, please fill out the Rafflecopter form AND leave a comment at the end of this post telling us one of your New Year’s resolutions. The giveaway is open during the time specified on the Rafflecopter forms. Winner(s) chosen at random from all eligible entries. This contest is open internationally, where not prohibited by law. Open to participants, 18 years or older, who are legally allowed to participate in such a contest as allowed by their local laws. All federal, state, local, and municipal laws and regulations apply. Void where prohibited. No purchase necessary. By participating in the contest, participants agree to be bound by the decisions of the contest sponsor. Prize will be delivered by the author. This blog, its reviewers, and the owner are not responsible for items lost in the mail. By entering this giveaway, participants agree to abide by these terms.

Now, head over the THE BOOK NYMPHO to see today’s feature with Kerrelyn Sparks.