The New Year’s Fantasy is a sequel of sorts to The Christmas Fantasy. Jessica is the heroine, and her chance at a happily ever after takes place on New Year’s Eve where she catches the eye of a much older, dashing man, who happens to be Chris’s boss- fire captain Douglass Finley. Both Jessica and Doug have had a bad patch in the love department. I wanted Doug and Jessica to connect during the New Year’s Eve party they’re at, and I decided to take a “lust at first sight” approach from Doug. The reason Doug notices Jessica is because she’s enjoying a plate of chocolate covered strawberries. Doug can’t stop watching Jessica because as he never witnessed a woman so turned on by eating fruit.

A flash of light from someone’s camera went off next to him, blinding him for a moment. He blinked and turned away, this time facing the windows. A few feet away, a woman sat alone at a table, eating strawberries—or rather, she made love to them with her mouth.

He lowered his glass, afraid he would choke on his drink. This woman, a good ten years younger than him, with long, rich copper hair framing her scantily clad chest, kept her eyes closed as she devoured a strawberry covered in white chocolate. Her tongue swept along her bottom lip, swiping away the remains of any juice and chocolate she left behind. When a bit of chocolate landed on chest, right above the globe of her breast, she gasped, dabbing at her skin with a napkin.

Blood rushed to his cock, and his balls swelled. He licked his lips, imagining how soft her flesh must be and how incredible she would taste, both sweet and salty at the same time. He shifted to relieve the pressure in his dick. He should stop staring before his arousal became noticeable, but he couldn’t. This stunning vision was a feast for the eyes.

His breath hitched, and his pulse lambasted his eardrums. The end of the beauty’s hair tickled her nipple. The bead of flesh covered by the sequined fabric stiffened before his eyes. He’d never seen a woman turned on by eating fruit!

I’m a dirty old man. Catching the object of his inspection staring right back at him, he shifted his gaze away. She flicked her hair over her shoulders, giving him a wider view of her cleavage that would make any man drool. An amused light came into her eyes as she studied him, zeroing in on his crotch.

She can’t be looking at…. No way. He chuckled, letting her get her fill. It was only right since he’d been the voyeur first.

She twirled a strawberry around in the air. She then popped it in her mouth and winked. He laughed.

Thankful she wasn’t insulted by his peeping, he grabbed his glass and approached the table, hoping she wouldn’t tell him to get lost. He concentrated on her lips, plump and lush, as if she’d just been given a lusty kiss. He cleared his throat. “You like strawberries.”

Her forehead knitted in confusion.

What the fuck is wrong with me? Of course she likes strawberries! He grimaced at his lame statement, wishing he had a rewind button. He waited for her roll her eyes or even get up and leave.

With an impish smile, she pushed the plate toward him. “I do love them. Want a taste?”

Does Doug taste the strawberries Jessica offers him, and perhaps much more? To find out you’ll have to pick up a copy of The New Year’s Fantasy on January 5th 2015.

KT Grant is a self-proclaimed eccentric redhead who not only loves to read a wide variety of romances, but also loves writing it. Under her alter-ego, she is a well-known book reviewer and blogger who doesn’t shy away from voicing her opinion. A proud native of New Jersey, KT is multi-published and known for writing “out of the box” romances. KT has been a top ten best-selling author at Amazon, as well as being a multiple All Romance Ebooks best seller and a Night Owl Reviews Top Author Pick. 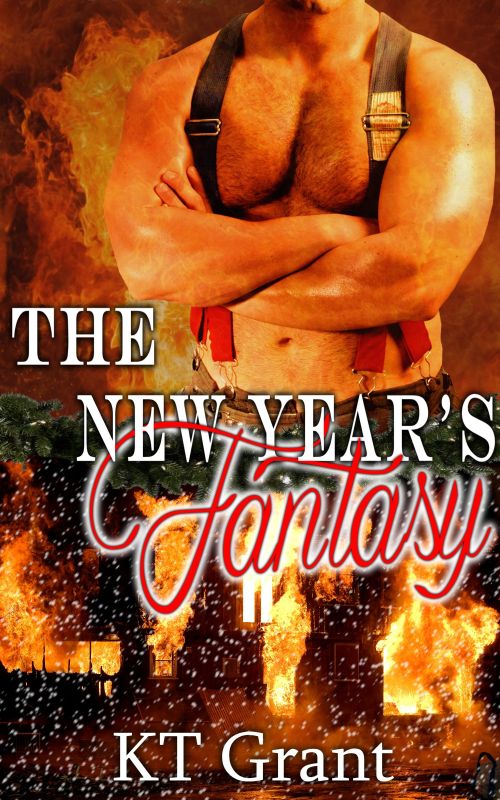 Seven years ago, the once overweight Jessica Mulligan made a pact with her best friend that ended up changing her life for the better. Now sixty pounds lighter, Jessica’s self-confidence has soared, but her longtime firefighter crush still won’t notice her.

What she doesn’t count on is catching the eye of his boss, the much older and handsome Captain Douglass Finley, who thinks she’s perfect in so many ways…

Three years ago, Doug Finley’s life took a turn for the worse when his wife admitted to an affair with their next door neighbor. Other than the possibility of a promotion to Deputy Fire Commissioner, the only thing he looks forward to is weekends with his eleven-year-old daughter. With his forty-fifth birthday around the corner, his love life is in the toilet. The ritzy New Year’s Eve bash he has been roped into feels like torture, until he spies a vision of beauty eating chocolate covered strawberries like she’s making love to them…and all he can think about is making love to her.

When Jessica admits she never had an orgasm, he’s determined to give her the ultimate New Year’s fantasy she’ll never forget.

But can he convince her they belong together for longer than one night?

If you have a craving for chocolate covered strawberries (also low fat), which is easy to make and a great treat to have at any holiday party, here’s a great recipe you can follow:

KT is generously donating a $25 [US] gift card to Godiva Chocolate to one (1) lucky commenter. To enter, please fill out the Rafflecopter form AND leave a comment at the end of this post telling us your favorite holiday treat. The giveaway is open during the time specified on the Rafflecopter form. Winner(s) chosen at random from all eligible entries. This contest is open to US residents only, where not prohibited by law. Open to participants, 18 years or older, who are legally allowed to participate in such a contest as allowed by their local laws. All federal, state, local, and municipal laws and regulations apply. Void where prohibited. No purchase necessary. By participating in the contest, participants agree to be bound by the decisions of the contest sponsor. Prize will be delivered by the author. This blog, its reviewers, and the owner are not responsible for items lost in the mail. By entering this giveaway, participants agree to abide by these terms. a Rafflecopter giveaway

Now, head over the THE BOOK NYMPHO to see today’s feature with Kara Braden.