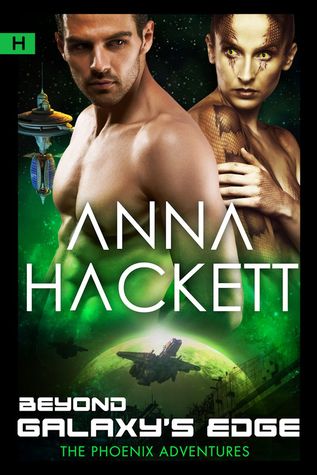 Justyn Phoenix lives at Galaxy’s Edge with his two brothers and sister. Together they run a deep-space convoy with a little illegal smuggling on the side. They are cousins to the more famous treasure hunting Phoenix brothers from the previous Phoenix Adventure series titles. For three years, Justyn has admired, even fallen in love with, Nissa, thinking he is not worthy of a woman like her. Meanwhile, during those same three years, Nissa has tracked down and attempted to catch Justyn in the act of unlawful transactions, becoming obsessed. Now the pair must work together to recover one of the galaxy’s most vital and cherished historical documents, heading out into dangerous and deadly space beyond Galaxy’s Edge.

Beyond Galaxy’s Edge is a wonderful space escapade, full of exciting adventure and steamy romance. I have to admit that after reading the previous book, On a Rogue Planet, I wasn’t keen on the fact that the author opted to introduce readers to three more Phoenix brothers, plus a sister, before finishing off the first trio. However… Ms. Hackett made the right decision! Justyn and his brothers are a welcome addition to the Phoenix universe, and moving the setting to the edge of the known galaxy creates vast opportunities for exhilarating adventures.

First, Justyn. Think Han Solo. He’s a bad boy with a good heart, and he’s in love with Nissa. He’s dreamed of being with her for three years, but he wants more than a roll in the hay. He understands that his bad reputation would damage the career-driven Nissa, so he purposely keeps his interactions to light flirting and fun. He wants what is best for Nissa, and he isn’t what is best. Justyn is utterly swoon-worthy! I found Justyn to be a very worthy and sexy romantic lead.

Nissa is equality as noble, and she makes a great fit with Justyn. While he pulls out the adventure in her, Nissa allows Justyn to shine. I appreciate her internal struggles between doing what is right because it’s her job and doing what is good because it’s right. I am thankful that Nissa isn’t a woman who falls in love and decides her man is more important that her goals and ambitions. Rather, she is complex, and we discover that her upbringing and background have played a major role in what she thinks is best for her life.

But romance is only part of what makes Beyond Galaxy’s Edge such an enjoyable read. High action and adventure surrounding an impossible treasure hunt kept me reading until late in the night. The U.S. Constitution has been stolen! I have to admit that I cracked up when I discovered three of the five most important documents in the entire galaxy are from ancient Earth, and they are still intact. But just go with it. The theft sets up an amazing adventure that travels the course of four different planets, each with its own unique complications. While there are some incredibly lucky circumstances along the way, possibly a bit too coincidental, I found I was able to look past the fortunate occurrences and get wrapped up in the adventure. The situations afford our couple the opportunity to air deep secrets and hidden truths, developing their close bond and adding emotional intensity.

With all this goodness, I do have one small issue, which is truly a personal thing… Nissa is a reptilian humanoid. While I adore and appreciate the fact that Justyn finds her absolutely sexy, I have to say, the whole scales and vertical pupil thing, along with wider mouth, gave me the creeps a bit. I kept imagining a snake woman, and unfortunately, it wasn’t sexy.

Overall, Beyond Galaxy’s Edge is extremely fun and an enjoyable romance. The quintessential sci-fi adventure is exciting and action-filled. I adored Justyn and Nissa’s passion, and found the author creates a just the right balance between plot and romance. The treasure hunt is well thought-out, even with a couple of convenient plot twists. One need not have read the earlier Phoenix Adventure books, because Beyond Galaxy’s Edge focuses on a new set of Phoenix brothers, although the original set makes an appearance. I highly recommend Beyond Galaxy’s Edge, and look forward to more adventures!

Ambitious Patrol Captain Nissa Sander has spent three years at the galaxy’s edge keeping the law and order, and chasing scoundrel smuggler, Justyn Phoenix. But the charming rogue has always outwitted her and she’s had a hard time ignoring his hard body and handsome face. But when one of the galaxy’s most important documents—the US Constitution—is stolen, Nissa finds herself working with the very man she’s been trying to throw in her brig.

Justyn Phoenix embraces life and offers everyone a wink and a smile. He’s also in love with a spit-and-polish Patrol captain. Yep, crazy in love, and he knows she’ll never love him back. But when the opportunity arises to work alongside Nissa on a wild and crazy mission to recover the US Constitution, he can’t resist.

But nothing on this treasure hunt is as it seems. The trail leads them to fake documents, rival treasure hunters, and a millennia old mystery. As the hunt takes them beyond the galaxy’s edge, Justyn and Nissa will face the firestorm of their desire, and soon learn if they can survive long enough to save the galaxy.

Anna released an excellent stand-alone novella just prior to the release of Beyond Galaxy’s Edge. I really enjoyed reading it, so even though it wasn’t on my review schedule, I wanted to share a quickie review with you. 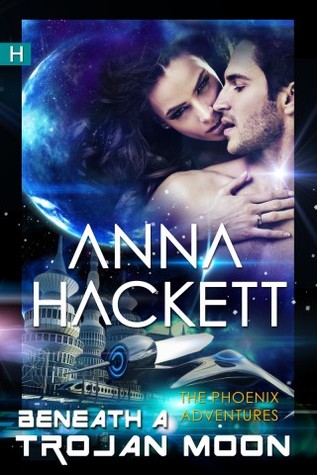 Beneath a Trojan Moon

Relda Dela-Cruz carries a huge secret, one that threatens not only her life, but those around her. Relocating to the market planet of Souk four years ago, Relda remains in hiding as a market businesswoman.

Marshal Hunt Calder recently moved to Souk to be marshal after retiring from Galactic Security Services. When two baddies attempt to rough up Relda, Hunt makes it his personal mission to protect her. With his alpha side taking control, Hunt can no longer hide his desire for Relda.

Beneath a Trojan Moon is an incredibly sexy and well-developed novella set in the Phoenix Adventure series. The title is completely stand-alone, although a few familiar characters make a cameo appearance. Hunt and Relda are HOT! The pair steams up the pages and develop an excellent rapport in the time given.

The story behind Relda’s secret and the lengths she’ll take to protect those around her is engrossing. I really enjoyed Ms. Hackett’s voice and the complexity she obtains in the novella-length format. I didn’t figure out the tale’s twist until the last moments, and I found the plot well-written and exciting.

Overall, I really enjoyed this novella. Beneath the Trojan Moon is super sexy and fun! It had the right mix of action, romance, and intrigue. Relda and Hunt are likable characters, both of whom I connect with immediately. I loved their sparks and enjoyed the back and forth play. They are mature and caring, not willing to play games. This stand-alone story is a must read for fans of sci-fi and romance.

Fortune teller Relda Dela-Cruz is a woman with a secret. One she’ll do anything to conceal. She hides in plain sight on the market world of Souk, content with running her profitable fortune-telling business and never letting anyone too close. But when assailants attack her in pursuit of a powerful artifact, Relda collides with the city’s handsome, new marshal. A man who leaves no stone unturned and no secret covered.

War has left former Galactic Special Forces Captain Hunt Calder tired and empty, but one look at sexy Relda—with her wild curls and lush curves—brings him back to life. When she’s threatened over the mysterious Trojan Moon, Hunt will let nothing stop him from protecting her. Even Relda herself.

As they face alien attackers and killer droids, Relda can’t resist her burning attraction to Hunt. But she knows he’s the most dangerous threat of all, because he doesn’t just want her body, he wants her trust and her secret, too. A secret with the power to destroy Hunt and Relda, the city, even the planet itself.

Purchase Info:
Beneath a Trojan Moon (The Phoenix Adventures #4)