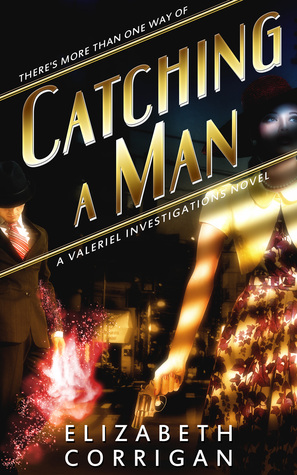 Catching A Man is the new alternate world detective drama by Elizabeth Corrigan.  After reading two of her previous works, I was intrigued by the premise of this one.  Ms. Corrigan did not disappoint in her new Valeriel Investigations series.

This world is familiar, yet different.  It feels like the roaring 20’s mixed with the 50’s in an alternate British empire like setting.  I really enjoyed the politics that play along with the societal norms in this different world.  What makes it more poignant is the juxtaposition of our heroine, Kadin.  She is a more modern woman trapped in a world where her intellect and honesty aren’t valued.  She tries to follow the expectations of her gender even though she longs for something different.  There are several moments that had me laughing out loud because of her uniqueness.  The story is completely told from her perspective allowing us to really see this world through her.  Her views are fairly balanced because we experience her struggle between trying to fit in to society expectations and being herself.

The supporting characters add a richness to the world.  Between her friends and her family, it is no wonder Kadin is torn.  Her best friend, Trinithy is perky, beautiful and everything that a woman in this world is supposed to be.  Everything except married – but she is working feverishly for it.  Her other friend is Olivan, Ollie for short.  He also is working diligently to see Kadin happily settled so she no longer has to live under her sister-in-law’s thumb.  The two of them are hilarious together and compliment Kadin’s personality.  Her SIL, Octavira, wants Kadin out of the house, but while Kadin is there, she treats her almost as a servant.  Though her brother places no expectations or financial obligations on her, Octavira more than makes up for it.  While demanding assistance with the children and chores, and having Kadin occasionally purchase things for Octavira, she belittles Kadin and her skills.

Kadin’s brother, Tobin, would happily have his sister live with them forever.  He feels she is special and should not be forced to follow society’s expectations.  This causes tension between Octavira and Tobin, which may explain Octavira’s resentment and thus poor treatment of Kadin.  Octavira uses the burden of having to care for Kadin as a reason to complain that they would be better off if Tobin had been an investigator rather than a doctor.  It is very interesting to note that in this world, investigators are more highly esteemed than doctors.  Medical insurance doesn’t exist – it is covered by taxes so it is not lucrative as it is in our world.  Investigations, on the other hand, are not a covered expense.  If you need a crime investigated, you either have insurance or pay cash for it.  Which means, sometimes good people pay for crimes they didn’t commit as well as some criminals get away because their victims cannot pay to prosecute.  Yes, this is a very, very interesting world and society.

Like I said, this story has a very rich world and captivating characters.  I found myself devouring this book, it was a gripping and fast read.  It was over too soon and I cannot wait to read about more of Kadin’s life and adventures.  There was some foreshadowing about Kadin and I am eager to learn more about her.  The world-building is slowly done, entwined with the progress of the story and I enjoyed the suspense it brought.  I look forward to learning more about the world.  I would wager that Kadin is on a path of development and self-discovery that may span several books.  It intrigues me because I enjoy stories of woman who are unique in worlds that do not necessarily appreciate them and find their own niches in them and thrive.  Though the mystery was not as complicated as I thought, it was still enjoyable with some twists and turns.

If you enjoy a good mystery/detective story set in a fresh new world, you may just want to give this new Valeriel Investigations series a try.  I truly enjoyed the characters, most especially Kadin, the mystery and the world it exists.  Catching A Man was an engrossing and fascinating read and I anxiously await more.

Kadin Stone’s life is finally going according to plan. She’s starting her new job as a homicide detective’s aide at one of the premier criminal investigation companies in Valeriel City, the capital of a 1950’s-style kingdom. Kadin is certain her new position will introduce her to any number of eligible men, so she’ll finally be able to get married and stop burdening the brother who insists on supporting her.

On Kadin’s first day, the royal family calls in her team to investigate the murder of gossip-rag cover girl Queen Callista. Kadin’s superiors think it’s an open and shut case. The queen’s jilted lover Duke Baurus DeValeriel had motive, means, and opportunity, but Kadin can’t help but spot holes in their theory.

After checking into a few leads of her own, Kadin inadvertently ends up in the confidence of Duke Baurus. When she tries to share what she knows with the rest of the team, she finds them unwilling to listen to the opinion of a girl who they know is only after a ring on her finger. In order to see justice served, Kadin finds herself doing the last thing she expected when she started working for a homicide detective—solve a murder!

5 responses to “Review: Catching a Man by Elizabeth Corrigan”