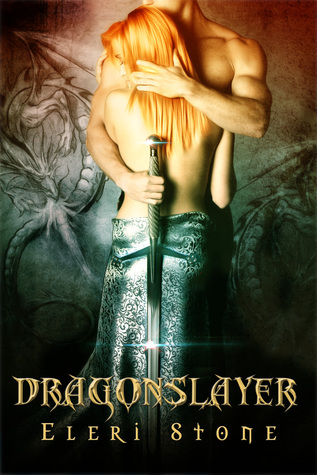 Eleri Stone’s Twilight of the Gods series share the stories of the citizens of Ragnarok, Iowa. They are the Æsir: the descendants of Asgard. I absolutely LOVE that all of these god-descended heroes are farmers in Iowa! The third story in this entertaining series, Dragonslayer, opens just about one year after the conclusion of the previous book, Witch Bound. Previously we learned that Christian was to marry Raquel in a marriage arranged since birth, but neither loved the other, and Raquel fell in love with Fen, Christian’s best friend. When Christian stepped aside for the pair, he realized that he too wants a wife, family, etc., so he’s remained celibate and alone for a year, searching for something special.

DNR wildlife biologist, Jacey Morgan, stumbles into Ragnarok looking into reports of missing chickens and dead animals in the surrounding area. When she meets Christian at a local bar, she thinks she’s found someone who will help her figure out what’s going on. Even though he agrees to help her, Christian plans to find a way to get this human out of town quickly, using some made-up excuse for the disturbances. However, soon Jacey discovers that there is more to the citizens of Ragnarok, and the creature she is hunting isn’t a stray dog. Christian takes a chance and trusts the human female, bringing her into his inner circle. However, will he be able to move past his own upbringing to realize what a true treasure Jacey is?

Dragonslayer is utterly exciting and entertaining; the romance sweet and emotional; and the characters honest and interesting. The story opens in just the right spot, having given Christian time to figure out what he really wants in life after his near marriage a year ago. He’s still best buddies with Fen and good friends with Raquel. Christian demonstrated a lot of maturity in Witch Bound, which only increased during the course of this book. He’s got to tackle his own beliefs and upbringing as one of the Æsir and balance expectations with reality. I found Christian intriguing, honest, and sexy.

I also adored Jacey. Being a bit of a geeky girl myself, I related to her awkward behaviors. Sometimes her comments were misunderstood, but she doesn’t let that get her down for long. She’s got almost a naivety to her, because of her awkwardness, making her all the more endearing. I didn’t like how much the clan dislikes Jacey and how horribly they treated her, especially when they gave others (in prior books) more leeway. Their attitude, coupled with Jacey’s inherent quirkiness, created empathy and an emotional connection on my part.

Together, Christian and Jacey are fabulous! Ms. Stone does an amazing job of fostering a simple and innocent attraction between Christian and Jacey, allowing it to blossom into a wonderful romance. It’s like two teens having their first crush, which develops into something far richer because they take the time to get to know one another. When Christian begins to experience a strong attraction to Jacey, a human, he is torn between his upbringing (to mate with another Æsir) and his own feelings. The internal struggle gives Christian, and the story, added depth, creating a high-quality, emotionally fulfilling story.

Carefully cultivated and honest conversations between characters is one aspect of the book that helps creates such a wonderful story. I appreciate that there aren’t any games and that the characters communicate difficult feelings. I like when they are challenged by their friends to look openly at the choices in front of them.

Beyond the romance is an interesting tale about a mysterious creature looming around town. How it arrived in Ragnarok and what it means for the Æsir and Midgard opens up a world of possibilities for future stories. I liked the action and adventure of the plot, and I look forward to finding out what will come next for the community. I also enjoyed seeing several familiar characters involved in this story, creating additional fodder for future tales.

In the end, I absolutely enjoyed Dragonslayer. My only complaint is that it took way too long to firmly establish the pair as a couple. However, the author treats readers to an epilogue set a couple years into the future, giving a greater sense of closure. The story was full of adventure and action, as well as quiet times like the remarkable one-on-one character moments. I loved watching Christian and Jacey grow as individuals and as a couple, and hope to see them again in future Twilight of the Gods installments.

One year after his bride left him at the altar for his best man, Christian Jager is stuck in a rut. Working at the local co-op, dating the same handful of women he’s known since childhood, riding with the wild hunt twice a month to keep the jötnar who destroyed Asgard from invading earth.

He wants something more, but he’s not quite sure what it is until Jacey Morgan blows into his life like a breath of fresh air. A wildlife biologist who’s come to Ragnarok to investigate rumors of a strange predator in the area, she’s also a native Midgardian who can’t ever learn the truth about Christian or his clan. His job is to distract her and get her the Hel out of town as quickly as possible so the Æsir can take care of the problem themselves.

Jacey wants the case wrapped up quickly too, and she’s not about to get distracted by the sinfully sexy man who’s so unexpectedly determined to help. With a new degree and a plan to get out of Iowa, she’s ready to move on to bigger and better things… A dragon isn’t quite what she had in mind.