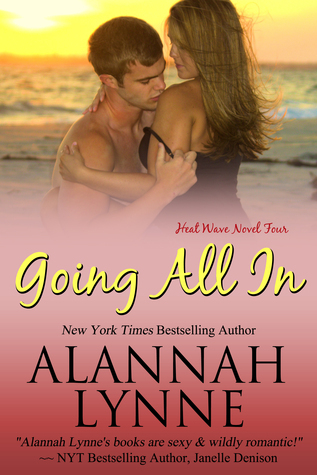 One year ago Wade Neumann was dumped by his rich, entitled, cheating finance Miranda, who didn’t seem to really care about him at all. With his heart broken he kept going, hating that his boss and good friend, Kevin Mazze, had him working with Callie Holden, someone who reminded Wade all too much of his ex.

Callie Holden did work Wade into the ground a year ago, but only because Kevin told her to do it – to keep his mind off his breakup. But in the two years since she’s left her wealthy father’s home, she’s learned she’s no longer that rich snob party girl. Now she’s working for her living, following her own ambitions, and refuses to use any of the trust funds left in her name.

Once again working together, Wade begins to see past Callie’s superficial similarities to Miranda and who she is on the inside. Wade is attracted to Callie – both physically and as a friend, but he does not want it to lead anywhere, afraid he’s going to be used and hurt all over again.

Going All In is a delightful romance, hitting both sweet and serious notes, which comes altogether for a satisfying conclusion. I really enjoyed both Callie and Wade. They are down-to-earth individuals and characters that I could be friends with. I appreciated how Wade expects Callie to act like Miranda, and is pleasantly surprised each time she proves him wrong. Of course, his constant expectations for Callie to hurt him and “waiting for the other shoe to drop” does lead to a major blow out over a pretty minor misunderstanding, which irritated me a bit. But overall, it works for the couple.

I liked that both Callie and Wade are super attracted to one another right from the start, and they both want to do what is best for the other. Wade is convinced that he can’t give Callie his heart, and so he tries to remain friends, but Callie wants more and pushes herself outside her own comfort zone to flirt with Wade. It creates a wonderful dynamic and some emotionally tender moments. Oh, and a SUPER HOT shower scene! And while there is a major misunderstanding that causes issues for the couple, I loved how they usually talked things through, especially when Wade admits he may not be the man Callie needs. It was refreshing to see this in a relationship.

With the relationship at a turning point and Cade not behaving like an adult, Callie takes matters into her own hands by joining Cade and his buddies on a diving expedition, which felt awkward to me. While the unfolding events added heightened drama and were a bit predictable, I’m good with how it all goes down and happy with the ending results. The only part I wasn’t happy with is the manner in which the pair finally seals the deal. After taking such care with one another, and Wade’s desire to give Callie the best, I felt how it all went down between them was a bit disappointing.

Going All In is an enjoyable romance filled with cute, sweet, and a few intense moments. I enjoyed Wade and Callie a lot, although the emotional power of their relationship seemed to weaken after a traumatic experience. I am very happy that the drama between Wade and Callie was minimal, and generally they did their best to talk it out. I was worried about being annoyed-there was potential for a few additional misunderstandings, so I’m glad the author didn’t go that direction. Overall, Going All In is an exciting and sexy, quick read that will heat you up during these cold winter months.

It’s been two years since Callie Holden helped put her father in prison, and since then, she’s learned a lot about life and herself. To Callie’s surprise, she actually likes working and has learned money is a tool to be used for good… or evil. She also realizes that even though she’s traveled the globe, she’s never truly lived. She longs for adventure and to experience a wildly passionate romance. The last place she expects to discover her dreams is in the arms of the ever-surly man she’s dubbed “The Beast.” But when they’re forced to work together, unexpected chemistry changes everything. In Wade Neumann’s arms, Callie finds the excitement and passion she’s been looking for, as well as a few other surprises.

3 responses to “Review: Going All In by Alannah Lynne”