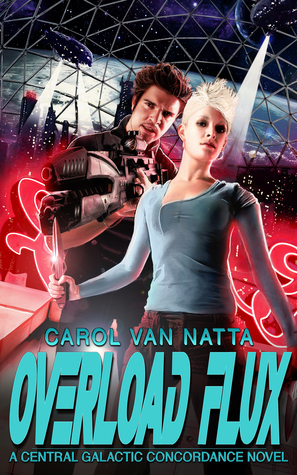 Overload Flux is a sci/fi-romance which ambitiously sets the stage for Carol Van Natta’s new series, The Central Galactic Concordance.  Set in the distant future where earth’s population has colonized and thrived on many distant worlds, non-sci/fi readers will find it approachable.

Policing such a vast federation of is an exercise in futility.  Those with big money and secrets to keep turn, instead, to La Plata, an elite intergalactic investigative and security agency.  I was intrigued by La Plata and the potential that is there to exploit in the series to come.  Shadowed and well-funded villains come with that territory which I think will provide to worthy opposition.  Van Natta has created a core group of characters that I think I will like to see working together, even as the focus on specific characters may shift, from book to book.

Overload Flux concentrates specifically on La Plata employees Luka Foxe and Mairwen Morganthur.  Luka and Mairwen have interesting mutative powers that were integral to the story and while it seemed that they would compliment each other, the reality of their connection was lacking for me.  Unfortunately this is where the story fell flat for me.  It didn’t feel romantic.  During their few sex scenes, it didn’t feel sexy.  Both characters are loners by nature who work hard at keeping to themselves so when they came together, there was a noticeable lack of passion.

Over and over I was left with the feeling that the author was trying too hard to walk a line that wouldn’t alienate non-sci/fi readers. Regular sci/fi readers may find themselves impatient.  Names felt contrived, some of the writing was muddy, and I didn’t feel like there was enough explanation of how humanity had arrived at the conditions where the series begins.  The possibility of alien life is even summarily dismissed with this comment near the end of the book,“…it had enough defensive and offensive capability to fend off an alien invasion, even though humans had never encountered other intelligent life in a thousand years of galactic exploration.”  That, to me, was an unfortunate narrowing for a species capable of interstellar travel.

For me, the epilogue, and the promise of future stories based on the world building established in Overload Flux, was the best part of the book.  To the author’s credit, I arrived there caring about the characters’ futures, so something did sink in.  As is typical, first books in a series are often the best book or the worst as the author gets her feet under her.  In this case, I think this average beginning will steer the series into better and better stories.  I look forward to seeing what intrigues La Plata gets pulled into next.

The Central Galactic Concordance has been stable for two centuries, but trouble is brewing. A pandemic is affecting hundreds of civilized planets, and someone is stealing the vaccine…

Brilliant investigator Luka Foxe’s hidden mental talent is out of control, making him barely able to function in the aftermath of violence, and the body count is rising. The convoluted trail leads to a corrupt pharma industry and the possibility of an illegal, planet-sized laboratory. In the face of increasing threats, he must rely on an enigmatic, lethal woman he just met, but she has deep secrets of her own.

Mairwen Morganthur hides extraordinary skills under the guise of a dull night-shift guard. The last thing she wants is to provide personal security for a hot-shot investigator, or to be plunged into a murky case involving sabotage, treachery, and the military covert operations division that would love to discover she’s still alive.

Two more lives in a rising death count won’t bother their enemies one bit. Their only hope for survival is revealing their dark secrets and learning to trust one another.

One response to “Review: Overload Flux by Carol Van Natta”