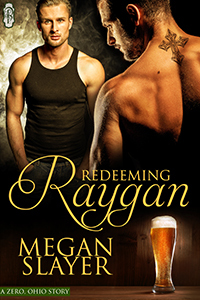 Sent by his publisher to Zero, Ohio after a bitter divorce from his husband, Jamie Grusin just wanted to hide out and get his novel back on track. He certainly wasn’t looking for a relationship when he decided to rent the small apartment over the local watering hole. Having dealt with one high-maintenance lover who ended up cheating on him, the last thing he should be thinking about is his brooding, skeptical new landlord. But, he can’t deny that something about the man intrigues him, and if spending time together is inspiring in more ways than one, who is he to argue?

Having recently inherited the Eight Ball bar, Raygan Mason has his hands full trying to modernize the place from the ground up. His new tenant’s attentions, however, are proving to be an especially irresistible distraction. Well aware that his personal history makes him a terrible candidate for anyone’s boyfriend, Raygan has sworn never to open up to anyone again. Still, there’s only so much temptation he can take, and losing this battle just might be exactly what he needs.

Throughout the story, I found Raygan to be a complex, if mildly confusing, character. Initially, I had a hard time reconciling his claim of being a habitually lousy boyfriend with his current fear of rejection, but felt his straightforward observations of those around him were refreshing. I liked Jeep fairly well, too, and thought most of his actions were justifiable, particularly since neither he nor Raygan seem to be amenable to the prospect of long-term, mutual involvement at first. The erotic tension between the two of them is likewise nicely done and builds steadily from the very beginning. Ms. Slayer’s characters once again have some legitimate doubts about the concept of “forever,” but they don’t take the happiness they have for granted, and the “happy for now” ending really works here. Leon’s reappearance was a special treat, also, and I loved the way he brightened up every scene he was in.

While I enjoyed Redeeming Raygan, there were a couple of moments that seemed a little awkward, and clouded portions of the story for me. As was the case with the previous story, Mixing Mike, keeping up with the time that passed was difficult on occasion, and I had to reread those sections a few times to make sure I had it right. I also felt that some later waffling on Jeep’s part took away from his strength as a character unnecessarily, but he makes up for it in the end.

Although I did have an issue with specific aspects of Redeeming Raygan, I enjoyed the story a good deal overall. Not easily finished in a single sitting, the narrative benefitted from a substantial page count increase, giving the main characters time to become more fully developed. While most of the secondary characters felt a little empty sometimes, Jamie and Raygan are very likable in their respective ways. The additional visits from Leon and Mike, and the news that accompanied one of them, made the entire story even better. Even though there was a rough spot or two, Redeeming Raygan is a sexy, sweet read that should make any fan of the Zero, Ohio series happy.

Raygan Mason is done with love. After plenty of failed relationships, he wants no part of the emotion. He’s broken inside and believes he’s not worthy of redemption…until he meets a man named after a car. Then his structured, but closed off world gets turned upside down.

Jamie “Jeep” Grusin isn’t big on love, either. Fresh out of a marriage filled with cheating and lies, he’s not looking for another partner. The writer wants a fresh start and is told Zero will cure what ails him. He’s not convinced…until he ends up at Eight Ball bar.

Can two men who think they are totally wrong for each other find out that redemption and a new start is so right?