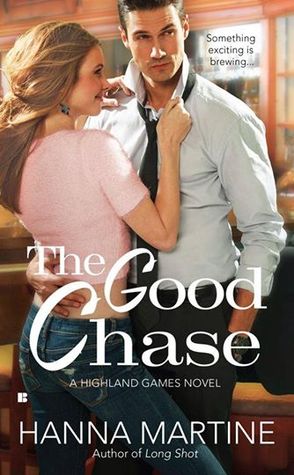 Ms. Martine has done it again with her wonderfully passionate and slowly burning contemporary romance, The Good Chase. The book was a fun and enjoyable read.

I have loved Shea since reading Longshot.  Shea is a no nonsense whisky expert who loves and cherishes her Scottish blood.  She is a woman who has learned from the mistakes of her past and is working hard to be the strong independent woman she knows she can be.  Shea is smart and talented, and I found myself connected to her in many ways.  She had been hurt and that hurt caused her to be careful to keep her personal and private lives completely separate.  However, Shea is not afraid to work for what she wants, especially since she enjoys what she does.

Bryne was eye-catching in Longshot as well.  Though we only briefly saw the ruggedly handsome rugby player in Longshot, we are finally introduced to him fully in The Good Chase.  Whew, he improved considerably – and that was impressive.  But Byrne is not a prince charming that will swoop in and make everything right (though he will try).  I loved his loyalty, his love of his family, his devotion and strength, and his heartbreak and frustration at not being able to help those he loves.  Bryne is witty and charming and smart.  His attraction to Shea and his admiration and love for who she is were sexy as heck.  I loved how he worked hard to keep to her comfort zones, not being pushy but still pursuing.

What made this story so awesome is the subtle tug-of-war that occurs between Bryne and Shea.  They are both very smart and independent people who want to do things for themselves.  Combined with the caring nature of Bryne, it creates obstacles for them.  I also enjoyed the almost backward courtship they had.  It causes them to get to know each other far better and to be more intimately connected.

Their story spanned quite a bit.  First there was the obstacle of Shea and her beliefs about keeping work and private lives separate.  Though this was the largest of the issues (spanning more than half the book) it was also the cutest in many ways.  I enjoyed watching Bryne work hard to approach Shea at the right times, not getting discouraged after being turned down, and then trying to find a place in her life.  Shea learns to see that Bryne is more than a just three piece money making suit as Bryne reveals bits and pieces about himself proving that money is only a means to a greater goal.  Family and ex issues pop up and lead to a huge challenge near the end.  One that is resolved because of their independent stubborn will, loyalty, and love.

Though this is the sequel to Longshot, you need not read it prior to this novel.  They can be read as standalone novels.  However, it was nice to get a brief peek at Jen and Leith and their ongoing HEA.  There were a couple of predictable/foreshadowed plot twists/resolutions.  The manner in which they are revealed was surprising and heartfelt making this a really comfortable and enjoyable read.  If you haven’t read The Highland Games series, you should.  It’s a great feel good, character driven contemporary romance.

Even though Shea Montgomery’s swanky bar and distinguished palate have made her a highly regarded whiskey connoisseur, she’s happiest bringing her favorite spirit to various highland games around New England. Her demanding ex made her wary of men obsessed with money and status, and she’s now more comfortable in the country than in the city. Still, when a gorgeous rugby player straight from Wall Street barrels into her whiskey tent, she’s tempted to change her mind…

J.P. Byrne went from poor beginnings to international high roller by using his charisma and wit, and holding fast to his dreams. A strong, independent woman like Shea is exactly what he’s looking for, only he has no idea how to prove he’s more than his three-piece suits—especially when he’s spent years doing just the opposite.

But as Shea and Byrne battle old demons, they discover together that the best remedy for past pain is a good, stiff shot of present pleasure…