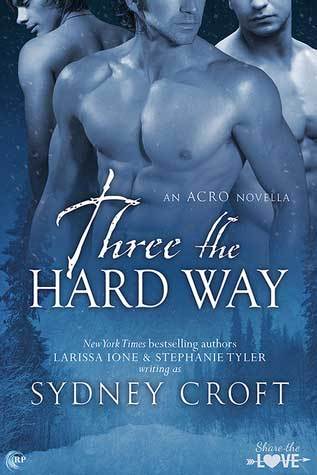 Taggart and Justice were childhood friends and more. On the run together with their mothers, the pair had to hide their unusual abilities out of fear they will be taken and killed just like their fathers. However, that all changed a few years back when both Tag and Justice’s moms were killed. Justice made the decision to join ACRO, a black-ops organization friendly to those with paranormal powers, whereas Tag went off the grid. The once inseparable lovers and best friends were no more.

Tag spent the past year on the run from ITOR, and evil organization who kidnapped and used his powers for murder. Betrayed to ITOR by Ian, the only man Tag thought he could love after leaving Justice, Tag must turn to Justice for help.

Three the Hard Way is a quick story set in the wonderful ACRO universe. This is one of my favorite series of all time, so I jumped at the chance to read and review the book. Generally, I enjoyed my return to ACRO; however, I felt the shorter-length story was missing some character development and relationship growth.

Tag has some major baggage, and he comes across extremely needy and selfish. He has two men who are willing to take care of and love him, yet the chip on his shoulder weighs heavily. Once he is able to lift his burdens, the flow of the book moved more smoothly.

Making three work as more than sex and as a true romance can be tough because of the odd man out, but the authors make this work. Two men both love the same man and are willing to try, especially because they are attracted to one another. But it works because they both love Tag so much.

Overall, I enjoyed the story, but the shortness of the novella made for some easy fixes, and I would have preferred more in-depth development as the trio went from enemies to lovers. However, the authors do a pretty good job of tackling the backstory of three men and allowing some healing. Per usual for the ACRO series, there are some hot and heavy erotic sex scenes. Generally, the scenes are used to display and convey the characters’ emotional states and well being. Three the Hard Way is a fun, sexy novella, I just wanted more between the explosive beginning and the HEA.

6 responses to “Review: Three the Hard Way by Sydney Croft”