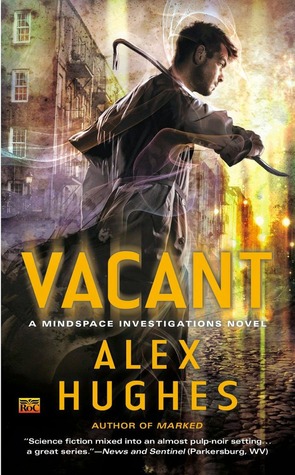 Ms. Hughes has done it again!  Gikany and Una are stunned by the realistic foundation of this stunning science fiction series.  Adam and Cherabino reached a momentous pinnacle in Vacant and were forcibly thrown off into a murky future. Word of warning – if you thought the previous novels were heartbreaking, you ain’t seen nothing yet.

Vacant begins with Adam and Cherabino on a date at a concert.  The experience Adam had during the concert was amazing.  This glimpse into what it is like to be a telepath was staggering.  And the emotional experiences continued through the novel.

Adam continued to develop as a character.  He continued to keep us enthralled with his tarnished hero persona.  Adam showed true strength of character, dedication, and self-sacrifice in this novel.  But his development wasn’t the only one chronicled.  Cherabino was heartbreakingly thrust into some life changing circumstances.  Gikany and Una had a very difficult time saying we loved this novel, because no one loves to suffer.  But Ms. Hughes expertly gave us the emotionally charged scenes in doses we could handle without going too far. The balance was delicate and well done. The heartbreak and sacrifice that took place were realistic and purposeful.  Thankfully we were given a glimpse of hope at the end.

As you are aware, Gikany and I discuss the novel and produce our reviews from our discussions.  Think of it as being privy to the summary of our book club meeting.  Vacant felt like it was the pinnacle of the overarching story of Adam versus Fisk.  In the previous novels they have unwittingly been on a crash course and it reached a head in this novel.  Through each novel we have been slowly learning the breadth and depth of Fisk’s power and influence.  In Vacant we discovered the staggering extent of it.  Gikany and Una are consumed by nervous energy as we anticipate what happens next.  Fisk has successfully harmed Adam, but in return, Adam struck back at Fisk and we know Fisk will seek retribution.

Vacant is well written, gripping, and therefore a very quick read.  Though it is an emotionally charged novel, we know our heroes will (eventually) be the stronger for it.  If you haven’t picked up this gritty and fascinating science-fiction detective drama, you need to and soon!