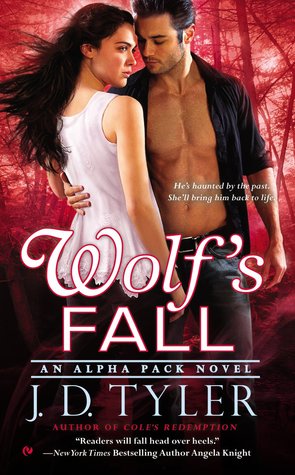 Wolf’s Fall is the sixth novel in the Alpha Pack series. Gikany and Una had been looking forward to Nick’s story – there was so much potential. Unfortunately, for us Nick and Calla’s story fizzled and left us a bit disappointed.

Note: This review contains spoilers from earlier books in the series. The books in this series build on each other to a degree.

At the end of the previous novel, Nick was still recovering from the traumatic events of his capture. The ending of Cole’s Redemption gave us a glimpse of Calla and the first meeting between Nick and Calla. It was electric and Nick was horrified that his mate is a vampire. Since his capture, Nick was sickened by the thought of being a vampire’s blood donor, and mated vampires can only drink from their mates. This set up and incredible tension in the story – but their journey felt forced and rushed.

Nick must mate with Calla or he will die, but Nick wasn’t sure he wanted to survive. Additionally, their mating was rushed because of Calla’s need for Nick’s blood. Once their mating began, she must feed from him and he was not capable of allowing that. We liked Calla, she was strong willed, courageous, and, although not necessarily a warrior, she was still a fighter. But, the lack of communication about things that are vital was just frustratingly silly.

However, we were confused by the fact that a vampire can only feed from their mate, yet Calla was still be living despite her mate being starved to death. This was never explained. How can any vampire survive the death of a mate? Calla was not the only example of this. This omission in the mythology really stuck in our craw.

There were a couple of other issues that rubbed us wrong. The first is that the big bad in this novel was kept unidentified until the end. This was a new character that none of us knew. The sections written from his perspective kept the character mysteriously cloaked. All it did was irritate us with the knowledge that his identity was being intentionally concealed from us for no apparent reason. Another oddity was the coupling between Nick and Calla. We are all for steamy, boisterous, demanding smexiness in a novel, but this one seemed to be far more graphic and with a harder edge than the previous novels. Not that we didn’t appreciate it, but were more surprised by the stark difference in this couple’s first sexual encounter. It lacked the tenderness we had come to expect. Their first rendezvous was more of a conquering than love-making. Though the subsequent scenes were bit softer, they also lacked warmth.

The introduction of what may be the new antagonist was fascinating. We hope he will be another overarching big bad, as he seems to have all the right markers for it. The alliance between the Alpha Pack and the Vampires looks promising for more stories between the two groups. Not to mention the vision Nick has about Noah (we cannot wait for Noah and Phoenix’s story). Yet what had Gikany and Una talking was the glimpse of power we see from Sariel. He continues to be a character that we love. Hopefully we’ll see his HEA story but until then, we love learning more about him.

Overall, Wolf’s Fall seemed to suffer from transitional novel syndrome. So much of this novel seems to be setting up future stories. Not that this is a bad thing, but because time was taken for it, there was less time to draw out the story between Nick and Calla, making it feel rushed and leaving out information that may have clarified the mythology quirk that irritated us. However, we still look forward to continuing with the series as we do enjoy the characters and like the world Ms. Tyler has created.

Our Rating: C+ Liked It, but we had issues

A top secret team of wolf shifters, the Alpha Pack are former Navy SEALS that use their Psy powers to take on the world’s greatest predators. But while each member is loyal to the pack, it can be hard to deny the call of desire…

Still tormented by his recent captivity, Alpha Pack commander Nick Westfall isn’t sure he’s fit to lead—especially when he meets the one woman he can’t claim without reliving the torture he endured at the hands of a rogue vampire.

Vampire princess Calla Shaw has seen her own share of heartbreak, but she can tell that the wild attraction she and Nick feel for each other could turn into something significant—if only he’d let it. But Calla isn’t about to give up on her mate without a fight.

Time is running out, not only for Nick to claim his mate, but for Calla and her coven. A vampire war is on the horizon, one the Alpha Pack can’t hope to win if their leader can’t pull himself back from the abyss…