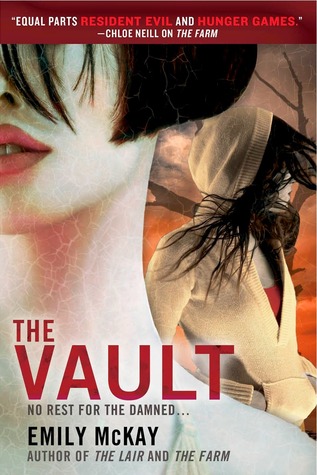 Gikany and Una have come to appreciate the compelling world of The Farm series. The unique vampire mythology is fascinating. Humans already possess the DNA that can turn us from thinking beings into ticks consumed by only the hunt and need for blood. That this potential can be made a reality through a catalyst created by human scientists is staggering. The previous two novels, The Farm and The Lair, have led to this final resolution: the search for the cure. Does it exist? Will it actually work? But most importantly, what are the consequences using the cure on the tick?

As the novel begins, Carter and Mel are forced to split up to try to save Lily. Carter returned to base camp to get help obtaining a sample of the cure from the vampire Sabrina. Meanwhile, Mel returned to El Dorado to hopefully find Sebastian and use him to open his impregnable vault. However, nothing in this novel was as simple or clear cut as it seemed.

The end of the novel nicely tied everything up with a big bow. We enjoyed how the story came full circle and the hope we were left with. Despite that, we still wonder what happens next. The world isn’t fixed, but there is hope that it can heal. However, with nothing on the author’s website alluding to future novels, it seems like this is the last novel. After experiencing so much heartbreak and tension through the series, it was really wonderful to have that sense of hope and happiness at the end.

Gikany and Una are not fond of multiple points of view when utilized in first person narration. The Vault is told from the viewpoints of all three main characters. This is a chapter from Mel, then a chapter from Lily, a few from Carter, then one from each, and so on. The constant starting and stopping interrupted the flow of the story for us, especially as the story bounced from once location and situation to another. To add to the roughness of the rhythm of the story, Carter and Lily’s perspectives are in past tense while Mel perspective uses present tense adding to the confusion as the story transitioned from one narrator to the next. In our opinion, it would make the story flow more smoothly if the author had told the story in the third person.

All in all, The Vault is a compelling and hopeful conclusion to this journey. We are not sure what happens next, if anything. The world is still not finished and we hope for more in it. Despite the choppy narration, this young adult series is fascinating and enjoyable.

Our Rating:  B- Liked It, but we had an issue

In a world where vampires rule and teenaged humans are quarantined as a food source, there is only one choice—resist or die. But fighting the vampires comes at a terrible cost to twin sisters Mel and Lily and their best friend Carter…

With Lily exposed to the vampire virus and lying in a coma, it’s up to Mel and Carter to search for the cure. Time is not on their side. With every passing heartbeat, Mel is becoming more and more purely vampire.

Desperate, Carter and Mel decide to split up. Carter will recruit human rebels from the Farm in San Angelo to infiltrate the guarded kingdom of the vampire Sabrina and steal the cure. Mel will go back to her mentor, her friend, her betrayer, Sebastian, who is the only one who can access an underground vault that may house the secret to the cure.

That is, if he’s still alive after she staked him to the ground. Now her worst enemy may be their best hope for curing Lily—and saving the human race.

Purchase Info:
The Vault (The Farm #3)

2 responses to “Review: The Vault by Emily McKay”