Welcome to the first post of my new weekly feature that focuses on audiobooks. It’s time to…

For many, to include myself, audiobooks are a learned pleasure. Figuring out how to listen attentively and appreciate the nuances of the narration can take a newbie some time. Listening to a book you’ve read previously is a great way to break into audiobooks. This is especially true if you loved the book, and it is narrated by a top-tier performer.

I started my love affair with audiobooks in this manner. I completed a “re-read” of the Kate Daniel series by Ilona Andrews and narrated by Renee Raudman. It took about two books for me to get into a groove, but once I hit my stride, I couldn’t get enough of the books in the audio format. It was nice because if I missed a scene or two, I generally knew what was happening. This allowed me to figure out how to better listen and determine which are key moments not to miss. Eventually, I was able to take these learned experiences into new-to-me books with great success.

Want to try and audiobook? See if your online library has one of your favorites and give it a go. Now, here is my audiobook review of a book I read and reviewed in 2014.

Burn for Me – Audiobook review 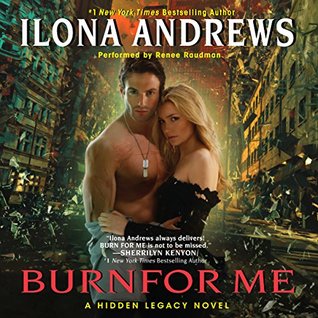 My first audiobook review of 2015 is a re-read. I first read Burn for Me back in October 2014 as a digital ARC for a review. Since my review still holds many truths, I am not going to repeat it all. Here are a few key points I wish to reiterate about the story.

I absolutely adored Burn for Me the second time around, and had I listened to it earlier, it would have made my Top 10 of 2014. The superb narration and fore-knowledge of the actions and events combined to create a captivating, gripping tale.

When I read the book the first time, my biggest complaint was my own confusion over events and the slow beginning of the story, with the last quarter of the book completely captivating me. Able to carry my enthusiasm for the end of the book into the “re-read” via audio, I found I was more emotionally attached and involved right from the get go. Couple this with Ms. Raudman’s near perfect narration, and I found myself entranced. Here are a few of my newly acquired observations:

Finally, Ms. Raudman’s performance is top notch. This is the first time I listened to the same performer narrate a different series. I’ll admit that in the beginning, I was comparing voices to those from the Kate Daniels series. But as soon as the story picked up speed, Kate and company disappeared and this became Nevada’s show. Ms. Raudman nails the emotions and creates a tension that kept me biting my nails. Each character has his/her own unique voice, allowing me to easily distinguish each person as s/he speaks.

Overall, I highly recommend the Burn for Me audiobook. Both the story and narration are sublime.

16 responses to “Listen Up! The Re-Read + Burn for Me by Ilona Andrews”